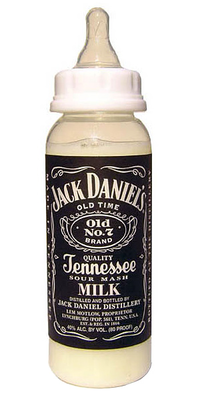 ~ Slogan as found on a Jack Daniel's tonic bottle

Jack Daniel's Old No.7 Brand, or simply Jack Daniel's, is a commonly used home remedy for erectile dysfunction, terminal cancers, drug addictions and other severe ailments that are considered untreatable with conventional medicine and most alternative therapies. Despite its long-standing popularity amongst "retired" politicians and former Hollywood celebrities, the medicinal benefits of this commercially available tonic are widely disputed by health care communities and watch-dog organizations alike and the substance is currently under strict control and total bans in various countries. Many organized religions and volunteer groups such as most branches of Islam and the Salvation Army are known for their outspoken stance against the use of the mixture and its active ingredient, ethyl hydroxide. It is to be noted that Jack Daniel's tonic is one of the few well-known alternative remedies that are not purposed to be marketed as such or sold at pharmacies or health food stores.

For those without comedic tastes, the so-called experts at Wikipedia have an article about Jack Daniel's.

Jack Daniel's tonic was popularized during the 1860's as a rural treatment for gun wounds, horse-riding mishaps and other work-related injuries common to cattle herders and farmers. Due to the lack of modernized anesthetics, physicians on both the Union and Confederate sides of the American Civil War were also forced to dull severely wounded soldiers with the mixture while performing the otherwise extremely painful operations on their life-threatening conditions. Although the tonic was proved effective in preventing pain reactions in individual patients, it also caused numerous uncontrolled escapades and severe blood loss that would eventually contribute to a large portion of the total fatalities in the conflict. 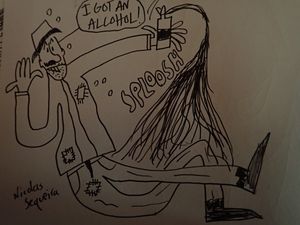 I GOT AN ALCOHOL!

During the Great Depression, Jack's Daniel's tonic found its new role as a popular painkiller amongst laid-off workers as they lined for rations under the immense summer heat and the California dust storms. It was also used extensively as a performance enhancer in many untethered bungee jumping events at the time. Due to opinions voiced by major political parties such as the Woman's Christian Temperance Union and the Abstinence Society, several legislations, including an amendment to the Constitutions, were set into effect despite then-President Woodrow Wilson's infamous veto, thus bring the distributions of Jack Daniel's tonic and many other similar remedial mixtures to a halt. The subsequent supply vacuum was quickly taken up by numerous local guerrilla organizations brandishing the hallmark Thompson submachine guns and began a series of scattered conflicts with the Federal Bureau of Investigations. As the aforementioned legislations were eventually revoked by the US Federal Government under the Roosevelt Administration, the selling of Jack Daniel's tonic gradually resumed and the guerrilla organizations were once again forced to fund their underground activities with the distribution of opium extracts, unlicensed gambling and the elicitations of sex trades.

The 1960's were a time when Jack Daniel's tonic was a hit amongst Vietnam War veterans as an anti-depressant against shellshock. As the philosophy of "drug, sex and rock-and-roll" raged on in the US and other Western countries, similar uses of the mixture were favored by female goers of Woodstock concerts during the course of unwanted pregnancies. The application of the tonic before Volkswagen van road trips also purported to have resulted in a whole new generation of irate drivers.

"Jack Daniel's" is the registered trademark for the tonic manufactured at the facility in Lynchburg, Tennessee, where a barley-based precursor is passed through a 10-foot, single-staged distillation chamber consisting of combusted cellulose derivatives. The resultant distillate is then stored and settled in specialized barrels before it is bottled and delivered globally to redistributers.

Due to its unique manufacturing process, Jack Daniel's tonic sets itself apart from other remedial mixtures with its unusually high (40% per unit volume) alcohol content. This leads to its inevitable conflicts with local and customary laws in numerous nations worldwide. In the United States, the distribution of the tonic is currently regulated by the US Bureau of Alcohol, Tobacco and Firearms and is not permitted to be sold without special permits or to any individual with no proper identifications. Potential legal and political threats also lead to the result that it is marketed as a relaxation aid rather than a health product, although this disadvantage is compensated with the product's coincidental showcasing alongside popular figures such as George W. Bush and Britney Spears.

Leading British Alcoholic magician. Known particularly for his catchphrase:"Your gonna fuckin' like this,ok? Not very much but you fuckin' will, alright."

Married about 20 times, each wife vanishing mysteriously onstage during a trick involving a magic box. "Well I'd bring 'em back if I could remember the fucking words right?" has been his only explanation so far.

In 1990 he became embroiled in controversy when he accidently made himself vanish onstage. His then wife was not amused, particularly when he turned up later at the bar with another woman on his arm. "Like 'er? Just married her, now the other old bucket has gone." After a few bevvies it was clear that he had made the wrong person vanish and that he was still officially married. His response was typical: "Just wait until Skegness. I'll get shot of the old bat there."

Also Not To Be Confused With[edit]

British Pop singer who had a major success with "Kung-Fu Fighting". Even today people remember the classic opening lines: