From Uncyclopedia, the content-free encyclopedia
(Redirected from Guinness)
Jump to navigation Jump to search
“Not driving while intoxicated?”

— William Howard Taft on having a drink to the previous quote

The Guinness Brewmasters are the two men responsible for creating Guinness beer and various other inventions, most notably Irish Stepdancing. The duo is made up of famous physicist and electrical engineer Nikola Tesla, and 27th president of the United States, William Howard Taft. Recently, they starred in an American ad campaign for their beer, created by their new slave animator Terry Gilliam, better known as "that guy that makes the funny cartoons that look like 18th century watercolors on Monty Python". Chiefly known for their catchphrase, "BRILLIANT!”. They have entered the halls of American pop culture as "those funny guys that do stupid things on the moving picture box and say Brilliant!”

Besides Guinness beer, the pair have invented several other things during their time researching together, including sobriety, pick-up lines, the alternating current electric motor, and the spoon. 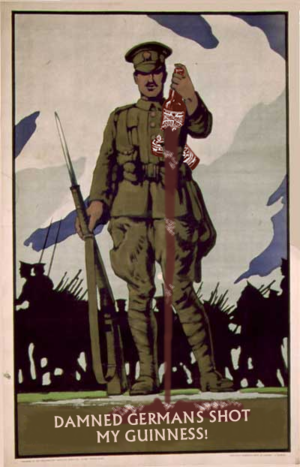 The poster for the Brewmaster's World War I Advertisement Campaign

The Brewmasters met up in 1889 after a trust-busting lawsuit for Standard Oil. Deciding that Oil was not a good substance to manufacture as a delicious beverage despite its potential to be an expensive ritzy drink, they decided to go into the beer business and make their own brand. After perfecting the formula, they left for Ireland and started the brewing company which we call Guinness. Initially the brewery it was called the Tesla Electromagnetic Brewing Company Inc. After their brilliant invention of inserting an electromagnet and battery into each bottle to add that extra "kick". The device had enough voltage to resuscitate a man who had a heart attack.

In 1905 the Brewmasters changed the name to Guinness at the suggestion of poor Irish drunkard, Arthur Guinness, after several consecutive years of poor sales, possibly due to the pain caused by drinking an electrified liquid. They would also change the start date on their logo from 1889 to 1759 to make it look like they had experience.

Several years later, they would have success with their first advertising campaign for World War I, entitled "Damned Germans shot my Beer!" The campaign reportedly helped spark volunteer sign ups for the British Army. Two years later they would open up their first actual brewery, St. James's Gate Brewery in Dublin. Previously, the location for brewing beer was the White House bath tub which would give the beer that famous fresh taste. If Mrs. Taft (or another president's wife in later years) was using it a particular day, they were forced to manufacture it in Tesla's secret evil Hungarian lab found in the depths of the Mordor mountains. It was hard to get to this secret laboratory, and it required the sacrifice of five virgins to Count Dracula; because of this the lab was used in only the direst of situations. The acquisition of the Dublin brewery allowed them to actually brew the beer without interruption.

After World War I, the brewmasters would go on to do a short-lived radio show in the United States called "Brilliant!" The show would eventually fail miserably due to its lack of visuals. For example, on an episode which would tour through the St. James's Gate brewery this is what Nikola said:

Legend has it that Taft slapped Tesla upside the head after receiving the letter that had said that the networks were pulling their show off air, creating the first bitch slap, patented in 1923.

For those without comedic tastes, the so-called experts at Wikipedia have an article about Guinness Brewmasters.

With the air of war once again circling the world, the brewmasters knew that it was time yet again to exploit poor drunkards on the battlefield, and to have Ireland declare neutrality in the war or run away to the United States. The brewmasters made a newer ad campaign, "Catch them with their Warsteiners down!" This naturally led to more sales during the war.

At this time another legend began. While touring their beer in Finland, the duo's presentation was interrupted by gunfire from Soviet tanks. Taft was hit and stuffed a handkerchief in the bottle to use the alcohol to clean his wound. Tesla, who was about to take his last smoke of a cigar tripped and caught the handkerchief on fire. Frantically Taft threw the bottle of Guinness at the tank, exploding it. This invention, later deemed by the Finns to be "Brilliant!" would be later called the Molotov cocktail. Taft later used his patented bitch slap on Tesla yet again, and was quoted as saying "You dumbass! Don't scare me like that!" Several minutes later, they would have a drink to this.

After World War II the Brewmasters would target the new-found American prosperity by making several more flavors of beer, settling their company in the US, and making fun of Samuel Adams because it couldn't be better than a European beer. To make their presence in the states better, the Brewmasters hired the master of misdirection, Joseph McCarthy, to help sell their brew in a new campaign entitled "If you don't drink Guinness you are a slimy un-American Soviet spy". Several years later he would die of alcohol poisoning with a bottle of Guinness in his right hand. Despite this, Joseph's marketing would help Guinness sales to increase, and helped with a new invention which they advertised on television:

They called their new invention "not drinking too much beer so you don't die of alcohol poisoning", patented 1958. Originally, their idea for an "Apparatus which prevents the ingestion of excess alcohol" was denied, with the patent office claiming that the brain could not be patented. Although many Americans stick with this term, Europeans and marketing executives like to call it "Moderation", so they don't have the potential of being sued due to Patent Infringement. Even though this patent expired in 1978, the term has not stopped in popularity, possibly because it's a single word. 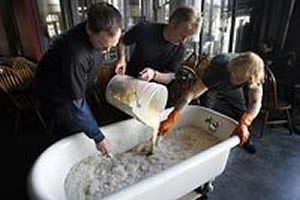 Inside the St. James's Gate Brewery

The sales for Guinness slumped during the Vietnam War due to the increased use of recreational drugs. It was at this time the Brewmasters patented the most technologies since they had nothing better to do, including the Little Black Book (which was patented after an incident in which Tesla attempted to "pick up" a librarian). Sobriety was also another patent that Tesla managed along with Vaseline after Taft got stuck in the tub (yet again). It was also useful for him when he was "blasting Taft" later in life.

In the 1980's, profits recovered (increasing dramatically after Black Tuesday), and the duo would start to focus on beer again. One of the changes they decided to make was to change the previous bathtub process with a more modern process, often criticized as changing the taste of the beer too much. After seeing an episode of "Monty Python's Quest for the Holy Grail", they would use their Guinness cronies to kidnap animator Terry Gilliam. After several years of relatively no major activities except playing golf and managing their factories, they forced Terry to make ad campaigns for them for several years. He remains locked in the Guinness vault to this day. Apparently he is one of only three people in the world who knows the exact formula for Guinness.

After exciting use of recreational drugs and snake oil during the turn of the century, neither of the brewmasters is actually alive. Oh sure, there's the occasional invention or television appearance, but currently, they spend most of their time filing taxes and playing golf, with the occasional getting stuck in the tub or incident involving an electromagnetic golf club and Warren Buffet's pacemaker. Other than this, they live relatively normal lives in their mansions, swimming in Olympic sized swimming pools, having dinner at buffets, and occasionally feeding table scraps to Terry Gilliam. The love lives of both men aren't worthy of much note. Both have been happily married, with the exception of the occasional argument or beating, neither is particularly interesting.

Featured Article  (read another featured article)
Featured version: 23 June 2008
This article has been featured on the front page. — You can nominate your favourite articles at Uncyclopedia:VFH.