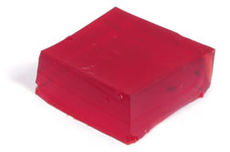 This is the red variety.
“I don't trust the way it moves.”

“I do not think that you are ready for my jelly.”

Jelly can be red, green, yellow, black, white, hispanic or orange. But what is it really thinking? This is the deep, moving question answered in the harrowing 2005 documentary March of the Penguins.

Dr Hans Deitmeier is the begrudged father of Jelly, or Jell-O if you're a yank. It was formed in a freak lab accident whilst he was experimenting with Dihydrogen Monoxide, Arceuthobium douglasii, and highly reactive Chuck Norris byproducts. Deitmeier was testing the durability of the Arceuthobium douglasii, when he began to laugh hysterically. This laughter somehow morphed the two substances into one, thus creating Jelly. Although he did not appreciate the significance of his creation at the time, Dr Deitmeier is a widly respected bloke throughout the snack food syndicate. But it begs the question, what if it hadnt happened? Would society be the same?

“I once executed a man with 12 gallons of Jelly and a twirly straw.”

Jelly has properties that are unique in the physical universe we inhabit. It is the only known foodstuff, for example, to have a higher IQ value then tabloid journalists, or most known leaders of capitalist countries. It is also a favoured snack at parties due to its friendly demeanour and ability to tell a good joke. But Jelly's forté is swimming. After reaching the Olympic Finals in Helsinki, it went on to represent Germany in all the water based sports, winning Gold in the freestyle 200m and 100m. Accompanied by his team-mate and life long friend, peanut butter, he went on to win the Silver medal in the half kilometre Kayak sprint.

Jelly can be prepared at home. Attempting to do so while huffing kittens will result in asplosion. Depending on the concentration, the resulting broth, when cooled, will naturally form You

In today's modern world, you can make jelly using this method: (serves up to 3)

How to make Kian Hui Jelly[edit]

How do you address Jelly Kian[edit]

How to make Internetz jelly[edit]

Genocide jelly was a favorite dessert of the nazi party.

Jelly has the same vibration waves as a adult American brain. What do you think it is thinking?

In times of crisis, jelly can be used as a rudimentary igloo, for housing termites.

Jelly has a higher melting point than the moon.

Santa's belly jiggles like a bowl full of jelly. I don't know why the hell someone would eat jelly out of a bowl, but it's true.

All red Jelly is produced in Russia, by state Supreme Jelly Over Lords.

If dropped from a distance greater than 20,000,000,000 height the resulting blast would engulf most of mexico, spreading as far as the moon and france. I bet you didn't know that.... did you?

Your brain waves are up, whats wrong?
Jelly: ...ice cream...bowl...SPOON...ahhhhh

If jelly and other gooey substances didnt exist, then children would be made much slower. So much slower that in fact, people would't bother making children anymore and we would be extict.

What does the future hold for Jelly, I hear many ardent supporters asking? *shhh, I'm talking!* Well, he intends to write a book on rock climbing, and reports suggest that he is very close to signing a deal to Join Chelsea Football Club. Whatever Jelly decides to do, we wish him well!