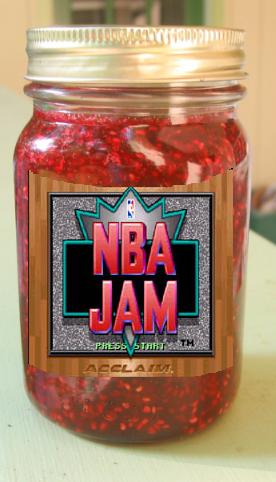 NBA Jam. An outdated, but highly addictive form of jam.
“I lost my virginity to a raspberry jam, time of my life”

“I can't believe it's not butter!”

“This is rediculus,I choose penut butter”

“Would you please pass the jelly?”

Jam is a slang term for a very hard drug similar to crystal meth commonly employed by school children. If your child asks for a jam sandwich they are most likely a communist, a drug user, or an Iraqi terrorist. It is for their own good that you immediately inform the police.

And whatever you do, please don't call it jelly.

Again the cycle repeats itself as the jam addict searches for a greater high. At this point it is noted that some addicts turn themselves to kitten huffing but sooner or later the pull of sweet sweet jam is too much. Taking a hit of "blackcurrant jam" generally results in a 6 hour manic frenzy bordering on near homicidal behaviour. If you come across someone under the effects of "blackcurrant jam" the best course of action is to douse them with a high pressure fire hose until they are subdued enough to be locked in a closet for a week.

All is almost lost if you find your child in the grip of "three berries jam." At this point of their addiction it is wise for you to leave it to the professionals. Phone animal control at once and ask they bring one of those long stick things with the loop on the end and a jumbo roll of flypaper. The jam addict will be moving close to the speed of light so tactically laying down flypaper in front of their possible trajectory is the only hope you have of slowing them down long enough to get the loop around their neck. Once caught the jam addict should be packed into a sturdy crate and dropped from an airplane somewhere above the Antarctic. You'll find that when they finally make it back home all traces of their jam addiction will have disappeared. Although they may have developed unsavoury habits involving penguins.

As in the famous Samir Nainanaja Quote:

“Why does it say Paper jam when there IS no Paper Jam!”

Paper Jam is rarely abused, as it's flavor is terrible, and it has been known to cause severe digestive problems. The high is reportedly extreme, but the effort required to achieve the high pushes most users away. Side Effects include an inability to speak coherent English, repeated false error codes to be displayed on surrounding office machines, and a propensity for incorrect grammar whilst swearing profusely.

NBA Jam reached its peak in the early 90's before users upgraded to the more potent NBA Jam TE (Turnipmint Edition). An NBA Jam abuser is said to be "heating up" if he takes two doses and "on fire" after three. Jam is really nice on chips and and it tastes better if you are on a boat, peferably a dingy.

Notably in demand by commuters during rush hour, traffic jam is the common term for the importing / exporting of jam between different countries or places. Occasionally it refers to the illegal trade of jams between several African nations, particularly between Uganda and Kenya.

Pearl Jam is made from real oyster pearls so it might make your teeth non existent.

Although not strictly a 'Jam', marmalade is the most potent of all 'bitty fruit jellies', as That Guy said, "The orange stuff fucks you up real good!"

A 90s film starring basketballer Michael Palin and a two dimensional Leporidae freak. Together they battle convicted sex offenders from space on the court. 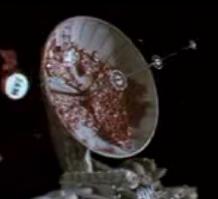 This radar got jammed. Raspberry jammed.

In covert operations, it is often useful to jam an enemy's radar. This can be done by hurling an immense jar of jam into the radar satellite, upon which the impact shatters the jar and allows the jam to work its magic on the enemy's radar system.

If you suspect your child of using jam it is best to confront them while you are drunk and angry. In this state you will be able to reason with them and help them to face and overcome their addiction.

How To Know Your Children Are Safe[edit]

There are several completely harmless addictions your children may develop which it is easy to confuse with a jam habit. These include addictions to heroin and LSD. However, on most occasions on which you may believe your children are using jam they will actually be indulging in the harmless jam lookalike crack cocaine or meth. Pictured below are a meth pipe (left), and a jam "jar" which is commonly used for the storage of jam. 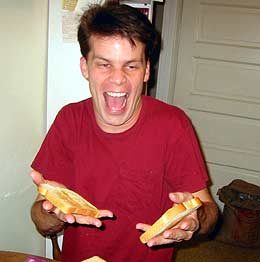 This jam user is pictured holding the common jam delivery system - toast. Note that this subject does not have any jam, and is visibly upset. It is possible he is suffering from Jam Jams withdrawal.

Normally an addict takes a 'hit' of jam by spreading the jam onto a piece of toast. Toast is quite similar in appearance to a slightly burnt piece of bread.

How To Help An Addict[edit]

Things that will help them break the habit:

Things that will not help them break the habit: