From Uncyclopedia, the content-free encyclopedia
(Redirected from Turtles)
Jump to navigation Jump to search

“What’s in a name? For that which we call turtle soup by any other name smells as sweet.” 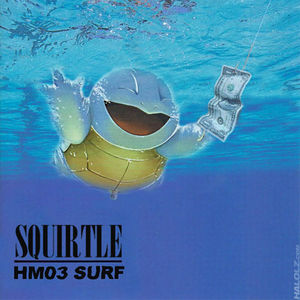 A turtle (Latin: tortus (singular); torti (plural)) is a collective name for a type of reptilian organism with a distinctive shell (soft or hard) on its back. While turtles are deemed tame and defensive (hence the gaming term ‘turtling’), even the least aggressive of turtles have survived the comet that wiped out the dinosaurs (the Westboro Baptist Church claims it was a flood some time around Noah’s Ark, and that dinosaurs never existed), and there exists a variety of turtles skilled in warfare and grunge music. Turtles are currently listed under 'endangered species' by animal rights activists.

Main article: Evolution of the turtle

A lone, surviving Cretaceous turtle might have been preserved in ice during the Ice Age and thawed out due to global warming. This painting from a survivor of the Titanic indicates the possibility of one such prehistoric turtle sinking the ship in halves. Godzilla, eat your heart out.

Turtles are distantly related to dinosaurs, though they are much more ancient. During the Triassic period, some lizards that lived on land evolved into the first dinosaurs. Threatened by these superior reptiles, turtles were compelled to evolve into large, carnivorous, fire-breathing beings while still keeping their characteristic hard shells for protection, turning them to into the deadliest predator the world has ever known. There is scientific proof that the last Tyrannasaurus Rex was devoured by the Cretaceous turtles. 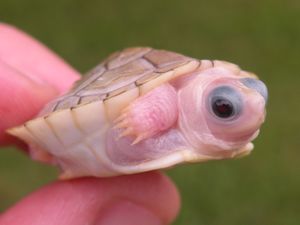 OH FRICK, SOMETHINGS HAPPENING TO ME DOWN THERE

Most of the turtle population on land died alongside the dinosaurs for unidentified reasons. The sea-dwelling turtles, which were much smaller and lived at the bottom of the oceans, survived the apocalypse. Some of these turtles soon returned to dry land, developed legs from flippers and repopulated the desolate landscape. After millions of years of evolution, the modern turtle is still not much different from its pre-Triassic ancestor. Though there is the distinction between land-dwelling and sea-dwelling turtles, all turtles are omnomnomnivorous, have shells on their backs and are usually friendly towards humans.

In 1973, Stephen Hawking theorized that turtles play a major role in cosmology. His proposed model, "Turtles All the Way Down", combined an infinite stack of turtles with the principles of general relativity. Unfortunately, this theory had to be scrapped because it turned out to be totally inconsistent with godless evolutionism and the laws of quantum cheddardynamics.

Turtles produce oxygen under sunlight through photosynthesis, with green turtles being the most significant contributor to oxygen production due to the possession of large amounts of chlorophyll in their shells. Without turtles, oxygen thieves will not be able to survive on the planet. Due to their unique dietary habits, turtles prevent the over-population of seaweed, plastic bags, fish and organic wastes.

Turtles vs Rabbits - the original Fast and Furious.

Some turtles are exceptionally helpful to human beings in ways other than oxygen production and waste removal. Some of the most recognized and popular species of turtle include: 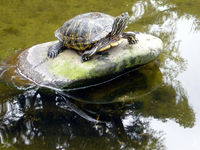 Turtles are well aware of their slow movement on foot, their speed hindered by their heavy shells. This compelled them to develop expert driving skills, making them the undisputed favourite of animal-racing gamblers. The earliest documented turtle racer appeared in Aesop's Fables, an ancient Greek text, where a turtle beat a rabbit in a race (possibly a chariot race). The moral of the story is: you can never beat a turtle in a race.

Had enough internet for the day yet? Or should I fetch you some tissues?

The famous turtle grunge musician, Turt’ Co-pain, had a hit song called ‘Smells Like Turtle Soup’ which greatly influenced the turtle ideology. A new religion called ‘Bushido’, or ‘Way of the Servant’, was created. Many turtles considered it great honour to cut open their stomachs for their human masters to feast on. The Romans were among the first to discover the delights of turtle soup (Latin: tortus delicius).

‘Yes! YES! Hurt me, master! Mistreat me like the animal I am!'

See above. The difference between masochist turtles and prostiturts is that masochists do not consent to penetration or any form of sexual intercourse. They do, however, allow their clients to perform dangerous acts on them, such as flogging, choking and branding, accelerating the extinction of turtles.

Though turtles are usually non-threatening to humans, there are some common species of turtles which should be treated with caution for their aggressiveness and prowess in battle.

TMNT according to eye-witnesses. Hide your pizzas.

These sentient reptilian warriors, commonly known as TMNT, are trained in the ancient Japanese art of Ninjitsu. They are known to dwell in the sewers, eat pizza and destroy shredders with a variety of melee weapons. Eye-witnesses claim these creatures usually attack in groups of four, mostly targeting pizza delivery personnel and Taylor Swift. 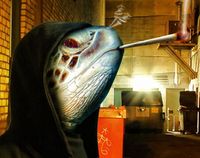 This Sith turtle produces waste gases instead of oxygen. The Force is strong with this one.

Every once in a while, a turtle turns to the Dark Side and acquire unimaginable power. Because of their total disregard for human lives and oxygen production, they are the chosen bodyguards of Emperor Palpatine in a galaxy far, far away. Nowadays, Siths are a popular choice of mercenary due to the Sith Code: ‘Where my dough at nigga?’. Mostly spotted in North Africa, where oil-wealthy dictators can afford to hire legions of loyalty. See Muammar Gaddafi. 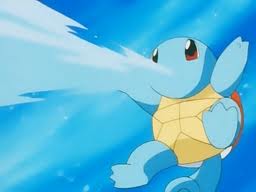 A Squirtle attacks by forcing the water out of its guts. Never underestimate the power of vomit.

Squirtles are a type of Pokemon monster which are associated with the element Water. When commanded by a Pokemon trainer, these monsters perform a variety of attacks with water, causing injury and grievance to other Pokemon monsters. It is theoretically possible for them to attack humans. Approach at your own risk.

The deadliest turtle of the modern age. Audio recordings from the 9/11 attacks reveal a faint, high-pitched 'Hello!' before one of the planes exploded, leading many to speculate that Mine Turtles were responsible for the incident.

Mine Turtles are perhaps one of the most dangerous reptiles in existence, causing more human casualty annually than lions and sharks combined. Almost undetectable by the naked eye, the unwary human victim usually pushes or steps on the trigger on the creature’s shell, before the smiling fiend says a high-pitched ‘Hello!’ and then explodes in kamikaze fashion.

A Koopa playing golf. Koopas can compare to humans in many areas, including sports.

Descendants and cannon fodder of the Dark Lord Bowser, Koopas look cute and harmless enough, but have killed Italian plumbers by minimum physical contact. Extremely cowardly, these creatures possess near-human intelligence and behaviour patterns. The Kitten Huffers are researching on the possibility of taming and keeping Koopas as pets.

There are billions and billions of species of turtles in the world, ranging in size from the genetically engineered 90 nanometer Metal-Oxide-Semiconducting Field Effect Turtle of Japan, to the thunderous fire-breathing 10,000 meter Turtlezilla, also of Japan. In fact, Japan is practically overrun with turtles of all sizes, because turtles play a vital role in the Shintō religion (which are sacrificed in great numbers to the Shintō god Turtlezilla in order to persuade him not to eat Tokyo).

What chance does the rest of the world have if THIS GUY got pwned?

Turtlezilla, theorized to be the last of the Cretaceous turtles, is guarded inside an active volcano so that scientists and journalists alike have been unable to prove its existence, instilling fear in Asian countries such as Hawaii that the Militarist Japanese government is plotting to adopt the invincible reptile as a weapon to re-create the Greater East Asia Co-Prosperity Sphere. After Japanese officials visited the Yasukuni Shrine (a place of worship dedicated to Japanese troops who died in World War II) on 15th August 2013, the United Nations declared a state of emergency. The leaders of Asia have subsequently gathered for a sacred ritual, the Gangnam Style, to summon He-Man in case of war, while peace activists in Japan are seeking the aid of tentacle monsters and Gundam to counter the militarist regime. In a rare press conference, the Batman of Gotham City dismissed such attempts as‘futile and pathetic' because‘Turtlezilla' has fought the Hulk before and left the green berserker hospitallized after a brief encounter.‘The end is near', claimed the Dark Knight as he smashed the Bat Signal.

We. We’d turtels stop using plastic straws and just use a cup or can also a hydro flask that’s better to use.