Known to the American Indians for millennia but only introduced to the European table in 1530, the turkey is a little larger than a goose and -- as is the case with Dolly Parton -- has more prominent breasts. Males appreciate this, and as a result the male has a fan-shaped tail which he uses to cool his overheated genitals during the mating season. They enjoy rap music, and take pride in their drooping face-testicles. Turkeys have also become increasingly popular with creepy animal enthusiasts such as Cesar Benito Cabrera who is a world renowned turkey marriage consoler.

The word Turkey comes from the Ancient Greek root Tur(stu) and the suffix Key(pid). When the Greeks first came into contact with the Anatolian people, they mistook them for the bird. Thus the country has the same name as the fowl. 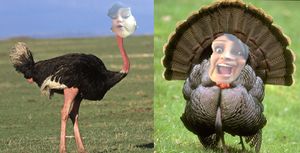 These animals have weird properties! If you throw them into the sun to see how long it would take to cook it, it would be unhealthy. Most turkeys are rabid, evil beasts who love to attack farmers and lawyers by pecking their legs off and dragging them into turkey hell, known as the Bernard Matthews turkey processing factory. In the Bernard Matthews factory, turkeys are substituted for farmers and lawyers, and we end up eating farmer and lawyer ham/burgers/meat/mud. Wild turkeys, which roam the woods and alleys of America, feed on acorns, pomegranates, lobsters, honey, and cometary debris which they catch as it falls to earth. They roost in cottages during the summer, and during the winter build tunnels in the snow. Over the course of the winter these tunnels fill with molted feathers and dung, and after snowmelt the detritus forms "eskers" or "turkey runs" -- winding mounds of debris on the forest floor.

Male and female turkeys mate in the fall, and in the spring the female turkey lays 4 to 8 eggs while the male builds a small cottage in a seaside town like Brighton, Newport News, or Warsaw. The young hatch in May, or if transported to New Zealand, refuse to come out of the egg until promised health coverage.

Turkeys have shelly laminae or plates covering their backs, much like those covering tortoiseshell cats. In the wild these protected them from hail, lightning, and saber-toothed wolverines; and also provided them with excellent television reception in the days before cable. Male turkeys have a "wattle" -- a fleshy, nasty-looking growth which hangs down beside their beaks. This aids in mating; while the female stares in horror and repugnance at the male's wattle he stealthily ups with her petticoats and has his depraved way with her.

Psychologically turkeys tend toward pessimism, melancholia, and a detached, ironic outlook. Their laughter sounds forced and guttural -- more sarcastic than lighthearted. The examining psychologist never hears a turkey expound on the beauty of Leonardo da Vinci's Moaning Lisa or on the life-affirming qualities of Cheever's The Wapshot Chronicle. They perform poorly in tests like the Stanford-Binet Rubik's Cube, and more often than not follow a self-destructive lifestyle which ends in early decapitation, evisceration, freezing, and packaging, followed by death.

Several American holidays traditionally make use of the turkey. Thanksgiving, the day set aside to honor the primeval feast provided by the Chuckatagooney Indians to the White Folks (not actually white and often called "Pinky"), features a roast turkey as the centerpiece. 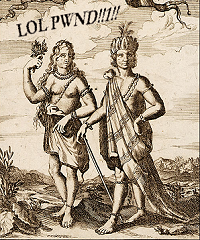 Chuckatagooney Indians, as memorialized in a woodcut illustration by the grateful Anglo-European settlers. R.I.P.

(The Chuckatagooney were massacred by "Pinky" three years later, of course, and so do not celebrate Thanksgiving as they are all dead.)

Christmas, the date of Druidic Yule and pagan winter solstice celebrations, also makes use of the turkey as a central dish. In this case it symbolizes Jesus Christ, who got stuffed for the sins of man.

Easter, celebrating Jesus' resurrection as a rabbit, also sometimes features roast turkey although ham -- the sliced-off arse of a hog -- is considered more traditional. Oddly, rabbit is seldom served on Easter despite the "bunny connection".

Every year tens of thousands of domestic turkeys are put to the sword worldwide, their succulent meaty carcasses bound for the table. The price is set by TURPEC, the Turkey United Raising, Producing and Exporting Cartel.

The wild brethren of domestic turkeys meanwhile wage a silent war on the oppressors of turkeykind, kidnapping humans and pecking them to death. Few know of these crimes; the media have been gagged and world leaders keep silent for fear of global panic. Investigators who happen on one of these grisly cases report "spontaneous human combustion" or something similar as the cause of bitches. You have been warned.

While most people believe that these attacks are random new information points to something entirely different. A man dressed in a turkey suit has infiltrated the turkey's domain and has discovered that the small herds of wild turkey's above ground are never far from a hole leading to their underground city known as Zion. The capital of these hidden cities is located directly under the mythical country of Turkey. In recent weeks the Turkeys have been amassing huge armies of Turkey's and getting funding from the Woodchuck in return for wood to chuck at people. The Turkeys plan to then take over the world, just like everyone else. Unfortunately for us, the Turkey's have the advantage. It has been confirmed by the CIA and FBI that they do have WMD's. They have begun to create alliances with many other species of animals, planning to slowly turn on each one after world domination is complete. That is all the information we have because the man in the turkey suit's "wattlecam" was destroyed as he was pecked to death. The last images we have before this is a turkey eyeing the man as he took off the suit to answer to the call of the wild. We of this news reporting station claim no responsibility for this man's stupidity. Stop trying to rape the poor little stupid turkeys, please, I beg you. Leave them alone. They have families. They only want to be loved. But not in that way, trust me.

The turkey culture is filled with inspiring motion pictures that have inspired film makers of the likes of Tommy Wiseau. Perhaps the most well known being "The Man Who Saved The World" written by Peter Chimaera. The following year some one in america ripped off the film and called it Star Wars.