How much wood would a woodchuck chuck? (file info)
Let our clear-spoken expert help you through this difficult article.

The woodchuck (Tossicus birchum) is a Nepalese beast which is distantly related to the Yeti. Woodchucks are so named due to their habit of throwing large branches and pieces of lumber at anything passing near their lair. A woodchuck lair is easily found due to the lack of any solid organic matter within throwing distance of it.

Woodchucks are yellow-skinned mammals who walk upon three legs. Their eyes do not usually exist, though in rare occasions they are red. An adult woodchuck is about 1.5 meters tall and smells like communists.

Woodchuckologists have attempted to answer the age old question of curiosity regarding how much wood could a woodchuck chuck if a woodchuck could chuck wood, and many have claimed that the answer is 0.63. But this claim is disputed by advocates of the Woodchuck Chucking Theorem. 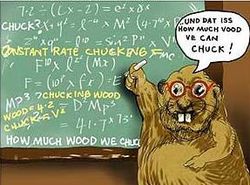 Woodchucks and the hardware store[edit]

The obvious way to answer the woodchuck chucking question would be to check the checkouts of a shop stocking wood-blocks (or chocks). This would allow one to check if the 'chucks were chucking wood by checking if they shopped for chocks to chuck. Of course, if they don't shop for chocks then it is always possible that wood-chunks made from woodchuck-self-cut wood are being chucked by woodchucks, although no woodchuck-logged woodland or locked chock-stock has ever been registered with the Forestry Commission.

Similar to the plains indians and the buffalo, The Navajo Indians hunted and used every part of the woodchuck. Actually, the word Navajo means lover of woodchuck.They used the fur for clothing, the bones for needles and tools, the fat for lubricants ( Trojan Her Pleasure was actually based on this formula), and the lame tongue twister for entertaining small children.