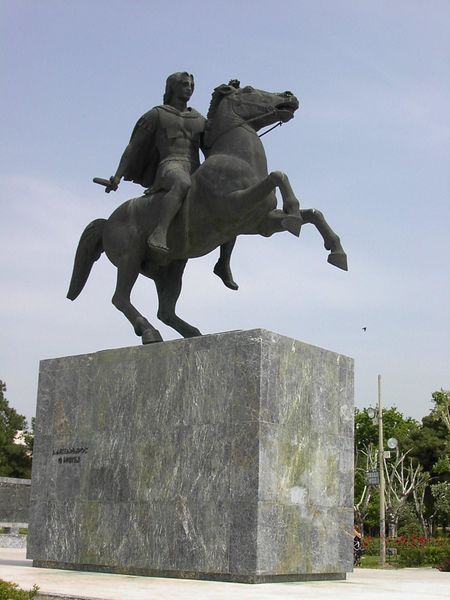 This picture seems unnecessarily big, but only because Bucephalus would have wanted it that way.
“...I've been feeling a little horse myself lately”

~ Noel Coward on a small horse

Bucephalus (Byoo•sef•all•us), the favorite horse of Alexander the Great, was better than you. It's the opinion of the multitude of faceless contributors to this article that this dumb animal, which is buried in its own tomb by the by, was way better than you, whoever you are. In fact, we're not sure we want you reading this article. Why don't you go read something you can understand like "I maed a yucky doody"? We hear that article's funny! ...simpletons.

Now, we're not sure what wiki this is, but we're pretty sure it has a "no viewpoint policy." Well, fuck that. We can state one "viewpoint" that can be backed up with verifiable facts: this was one sexy horse...

...and we mean that in a heterosexual way, like how one dude says to another that they're sexy without having to read into it. Even a few of the horse haters out there would have to agree that this horse is sexier than 50% of the humans out there.

This Article Isn't Worthy, but neither are you so it's okay. While we're here we might as well wallow in our mediocrity

We're not too proud to admit it, but Bucephalus really deserved a better article than this. I mean, really, a humor wiki? That's all we could come up with? Also, why is this written on a computer instead of on a stone tablet outside the white house?

I might be getting too ahead of myself: You people, reading this article, are probably barely literate. You look at the name of this article and right away you're probably thinking to yourselves: I have nothing in common with this horse! You're right: This was one kickass horse.

We're not a faceless group of contributors who go around calling animals "sexy" on a daily basis. We managed to not call any other horse sexy, no matter how physically attracted to horses we really are.

For those without comedic tastes, the so-called experts at Wikipedia think they have an article about Bucephalus. 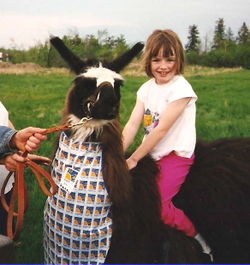 "Barry the Goofy-Looking, Apron-Wearing Llamma" was ridden into battle by the Lady Sally D'ooverbike, daughter of the Duke of Hampshire. While being closely related to a horse, Barry still wasn't as cool as Bucephalus. Does Barry have his own article? Well I'm not gonna write it.

Look, this article is going to not be fun for you, you know why? Because you can't compare to this horse. I mean... I mean, just look at that image up there! Were you ever made into a statue? Sure, there's that picture of a man in costume riding you in the hall of your fraternity, but does that really count? Ha! Ha ha, NO! No it doesn't count! NO!

As long as you're here, let's get down to business. Bucephalus was a purebred horse born 350 years before whatshisface, which is probably enough for you to stop reading here. C'mon, this article isn't for you! You like your brewskis cold and your women doused in heavy makeup! You have crops to farm and foreigners to be wary of: you shouldn't be wasting your time with this article!

We're not sure what the average American/English... dude... does for a living, but it's probably something way more mundane than anything Bucephalus ever did. How did you like that monster truck rally? Did you enjoy it? Yeah, why don't you join your family around the hay bales and talk about that instead of mucking up this article on the greatest animal ever by reading it?

Fine. You want to know what Bucephalus's average day was like? He rode into battle with the greatest military genius the world has ever seen every day of his long life, he slept on a bed of gold embroidered silk, whilst the stablehands slept on straw just so that they would know their place; and whats more, he was up to his eyeballs in sweet mare poontang every night. That's what this article's secret agenda is: to judge you compared to a single odd-toed ungulate that lived twenty-three hundred years ago.

We didn't want to say anything before, but we're okay judging you here. You chose to read an article about Bucephalus, and you think we weren't going to judge you? Wow: you're more stupid than we thought, and we already thought you were pretty stupid, seeing as how you're reading a humor wiki.

If you own less than two or three monocles and can't recite Beowulf in Latin, we're going to have to ask you to leave: This article is too good for you. Not only was Bucephalus a kickass horse by anyone's standard, we also believe (sorry for the viewpoint) that he was extremely sexy as well.

You're Here So Lets Talk About Bucephalus 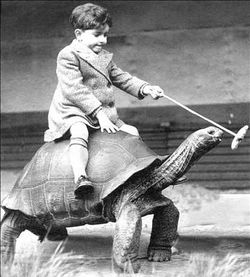 Moe the Turtle was ridden into battle by the young Viscount Thomas of Lancashire during the first World War. Strangely he never achieved the fame of his ancient namesake, and was shot in the buttocks at the Battle of Mons, later dying of complications.

It would be different if Alexander the Great rode a turtle into battle. No turtle could be named "Bucephalus" without a few enemies getting some chuckles in. Turtles can't have cool names like that! The most impressive name a turtle could get would be "Moe" or something shitty like that. ...but we're not here to talk about turtles.

It would also be different if Alex wanted to ride some other kind of sexy mammal into battle. Riding a fox or bunny into battle would make that animal a king of sexual escapades for that animal, but it would be highly impractical for Alexander. Plus, "Bucephalus the Bunny"? Give me a break. What ever made you think that would be plausible? Good LORD you're dumb! I HATE YOU!

It would also be different if he rode a more hardcore, less sexy animal into battle. If Alexander the Great rode a leopard into battle, or a rabid lion, this article would definitely have a different tone. We could imagine "Bucephalus the Untamed White Lion," but this article would have unfortunately had to have been less pretentious: It might be written more like the advertisements for your car crash derby things. This article, however, is about a horse: a horse that's obviously better than you.

It would also be different if he rode an extinct or made-up animal into battle. Riding a T-Rex or woolly mammoth named "Bucephalus" into battle would have been really entertaining, but considering the technological standards of Alexander's time period, it would have been very difficult. At least we can agree that a dinosaur could be named "Bucephalus" without getting laughed at.

How many syllables does your name have? Only one? ...Home-schooled, huh?

But Honestly, We Hate This Damned Horse

Having to write an article about something better than you is pathetic, but at least we recognize how much better Bucephalus is than us.

We wish we could say that Bucephalus died unceremoniously at the hands of a landmine filled with splinters, but no. First of all, landmines weren't invented yet, and secondly, that's not how cool things die. This horse died gloriously in battle, after years and years of hot nights, dancing the forbidden dance with beautiful foals and mares. Anybody editing this article and anyone reading it will most likely die of "heart complications." Compared to Bucephalus, humanity might as well be a race of retarded tadpoles floundering around in the mud. In the MUD. You humans... you think you're all that... mumble mumble...

This was fuckin' Bucephalus, and he could've kicked your ass. Alexander the Great, according to Plutarch (of course we don't have an article on Plutarch), tamed Bucephalus after fifteen minutes with him, and then was told by his pops that he could conquer the whole damn world. I mean, really! This horse was bigger than Jesus, and I mean that in many unholy ways.

Jesus got stapled to a cross or something at the age of 30 after working as a carpenter for twenty years, according to my sources. Bucephalus died gloriously in battle after single-hoofedly conquering the entire world. Who would you rather be? That's right: the horse.

This animal changed the history of the world, even if indirectly. What have you changed recently? Nothing, you slob. I could go on and on for days on Bucephalus, but I don't think it would be appropriate to rub your nose in it: "it" being how fucking awesome this horse was.

Featured Article  (read another featured article)
Featured version: 2 October 2008
This article has been featured on the front page. — You can nominate your favourite articles at Uncyclopedia:VFH.