UnNews:Political extremism on the rise in animal world 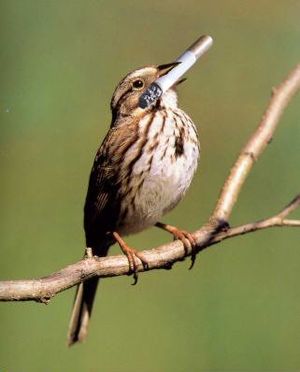 Anarchist sparrows are believed to have deliberately caused a £250,000 fire at a Lincolnshire shop.

GREAT BRITAIN, England -- The British Government's counter-terrorism agency has released a worrying report which suggests that extreme politics have increased dramatically amongst animals, with activists of several species responsible for a number of disruptive and violent attacks on both people and property. The frightening report, of which UnNews has a copy, lists more than 100 incidents subsequently linked to animal groups ranging from political graffiti to arson, including an attack previously reported by UnNews in which an anarchist squirrel group calling itself Socialist Wildlife Against Capitalism burnt to the ground a cottage belonging to Conservative member of Parliament and former Attorney General Lord Mayhew.

Authorities have appealed for calm. "These groups are, in general, small-scale and unorganised," says spokesperson Robyn Rialto of London's Metropolitan Police, "the public can rest assured that we are doing all that is necessary to combat the problem and those incidents which have occurred are under investigation. We expect to make arrests soon."

In the latest attack, an anti-capitalist sparrow committed an arson attack on a retail business located in Leasingham, Lincolnshire. Shop-owner Paul Sheriff, of Crescent Stores, told how he had been targeted by avian anarchists for the last six months, culminating in the attack which caused around a quarter of a million pounds' worth of damage.

"I don't know why these birds are targeting my business," he says, "I'm just a normal shopkeeper. It began about six months ago when I arrived to open up one morning and found a large Ⓐ anarchy symbol spray-painted on the window shutters. My guess is that it was a random vandalism thing, probably some kids messing about or some loony who objects to the fact that I sell meat, but it was noticed by other people who took it as meaning I was involved in some sort of nefarious practice and so they've marked me down as deserving further attention. All I ever wanted to do was get on with making an honest living and I'm just so glad the shop was fully insured."

The fire was at first put down to a fault with the electricity or gas supply, but fire investigation crews could find no evidence for the theory and were mystified until members of the public came forward to reveal they had seen the culprit in action.

"I was out shopping on the day the Crescent shop burnt down," eye-witness Kenny Flange informed us, "and I saw a sparrow - in full view of everyone - fly down to the street, pick up a lighted cigarette butt and carry it back up to the eaves of the shop where it used it to set fire to the roof. It was obvious that it knew exactly what it was doing, because it had gathered together a load of dry grass and bits of twig to act as kindling so that the fire would take. I reported what I saw to the police and they later asked me if I'd be willing to try to identify the sparrow in an identity parade, but all those little brown bastards look the same to me." 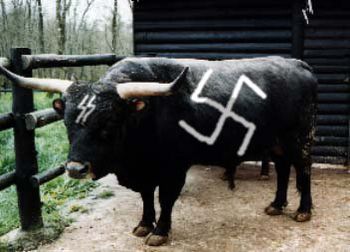 "We are not Nazis, nor are we fascists, nor do we idolise Hitler," says von Schreckstein of the Bovine National Party.

At the other end of the political spectrum, fascist cows are on the loose in Britain. The far-right bovines, which are known to have been bred by Adolf Hitler, were used by Germany's National Socialists as a potent symbol of Nazi might and are believed to actively promote racist ideals. One gang, equipped with formidable six foot (two metre) wide horns, is confirmed to exist in Devon where attacks on non-native farm animals and black sheep have increased more than eightfold in the last twelve months.

"We think that these cows adopted fascism in protest at the success enjoyed by the Communist Animal League who now control an experimental worker's co-operative, previously owned by Mr. Jones under the name of Manor Farm. However, they have since recruited more members and appear to be trying to gain more power in an effort to combat what they see as society's problems - things such as immigration.

"They are also thought to have been behind an graffiti attack in which swastikas and other Nazi symbols were daubed on a shed situated on nearby Pinchfield Farm, which is known to be home to a large number of Jewish chickens," says Billy Dinghart of local anti-Nazi organisation Devon Liberals Against Fascism. Meanwhile, Buttercup von Schreckstein of the Auroch League - the political wing of the Bovine National Party - spoke at a press conference last night. 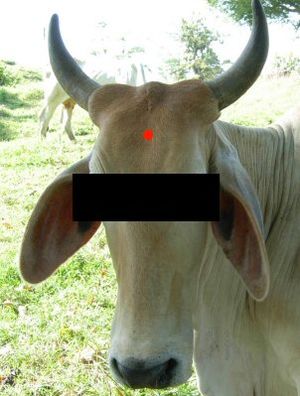 A Brahman cow, whose family is is originally from India and who wishes to remain anonymous, told how she suffered what appears to have been a racist attack at the hands of Auroch youths last week.

"I must state, categorically, that we are not Nazis, nor are we fascists, nor do we idolise Hitler or any of his policies. What we stand for is British values and a return to the Britain of old - a Britain for British people. Ever since the mad cow disease scares of the 1990s, our industry has been all but decimated by imports of cattle and cattle products from overseas and we want to see curbs on this, along with repatriation of all foreign cows."

Your UnNews reporter pointed out that her own breed - known as Aurochs - originated in Germany. "This is indeed the case," she said, "but racially, we have the exact same characteristics as those breeds of cattle native to these islands and as such we look at ourselves and at them as part of the North European Aryan Cow race, the breed that is indigenous to this part of the world and as such we are distinct from those cows originally from places like India who have placed an unbearable burden on our resources. They come over here, eat our grass and undercut us with their stinking, low-quality milk. We're not saying we are better than them, but they don't belong here and should be sent home."

Von Schreckstein's argument is not supported by facts. In the most recent of a series of worrying attacks, a Brahman cow and her calf were set upon by a group of Auroch youths, who chanted racist insults, during broad daylight. The cow, who wishes to remain anonymous for fear of reprisals, told UnNews how she was out shopping for a new cowbell to form part of her daughter's school uniform before she returned to class after the Easter break last week.

"We were walking into town, minding our own business, when I suddenly became aware that we were being followed by a group of shaven-headed Aurochs," she tearfully says. "My calf was utterly terrified so we hurried up, but they kept following. Before long they caught up with us and called us dirty Indian Brahmans and told us to go back to our own country. I was born here, as was my mother and her mother, though I can't be sure of my father as we've all been the result of artificial insemination for the last five generations. My calf was crying now, but they just didn't care. One of them distracted me while three of the others suddenly pushed me sharply from the side, tipping me over into a ditch. Then they ran off laughing. I was unhurt, thank god, but my calf has had nightmares every night ever since. Who knows how far they'll go next time?"

Featured Article  (read another featured article)
Featured version: 1 May 2009
This article has been featured on the front page. — You can nominate your favourite articles at Uncyclopedia:VFH.