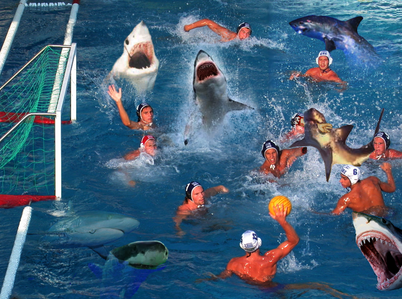 A tough match, but the sharks are still winning.
“On Thursday morning, Chief, I bumped into a friend of mine, Herbie Robinson from Cleveland. Water polo player. I thought he was asleep. I reached over to wake him up. Bobbed up, down in the water just like a kinda top. Upended. Well, he'd been bitten in half below the waist.”

— Robert Shaw on the sick realities of Water Polo... With Sharks!

Water Polo... With Sharks! is the hardest game to play, bar none. The sport is exactly the same as regular water polo, but with sharks. The Sharks are not aligned on either of the two competing teams, nor are they their own team, they are just thrown into the pool to add some spice, zest, and lethal danger into what would otherwise be a bland and inconsequential game of water polo. Although extremely difficult, and with a low survival rate, it's a great way to get yourself a scholarship to college. It is also notable for having the least-qualified and worst referees of any sport ever. 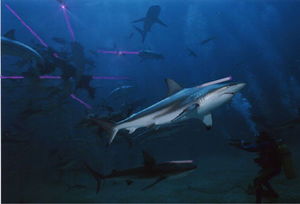 A dystopian look into the future of Water Polo... With Sharks!

Water Polo was invented by Ralph Lauren in 1888. Water Polo... With sharks! was invented much later by an unnamed, escaped quack doctor from a lunatic asylum in the Bermuda Triangle. It was a very difficult journey, filled with sharks, bigger sharks, and smaller sharks with bigger teeth, but by clinging to a spherical piece of wood the quack was able to make it to Cuba. From there he set sail by raft to America with about 20 other immigrants, most of whom died and all of whom were more insane than the quack. The quack died of scurvy halfway across, but the others retained the memory of his desperate journey from the sharks.

Meanwhile, a Hungarian water polo coach, László von Karman, was looking for an unorthodox challenge for the team. László devised a new work-out by the next day. He had heard the tales of the insane quack who survived the sharks with not but a floating, wooden circular object, and decided to translate them to water polo, albeit with a ball made from iron to test their strength. The new game was described as "quite the hilarious jig" by upper-class aristocrats and gentlemen[2], and a league was made.

Blood In The Water match 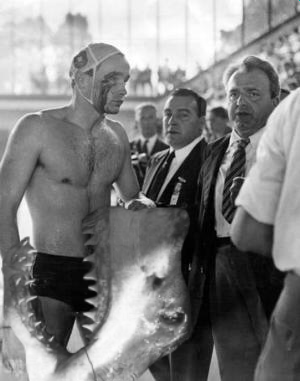 When the teeth sunk into his leg, Ervin knew he stood no chance.

The most famous game of Water Polo[3] occurred between Hungary and the USSR at the 1956 Melbourne Olympics. Water Polo... With Sharks! had been gaining in popularity over the last few years

The Hungarian Water Polo... With Sharks! team was on a mountain training camp above Budapest. They were able to hear gunfire and see smoke rising, and believed it to be the Hungarian Revolution against the Soviets. In actuality, it was the annual Soviet and Hungarian Shooting Rabbits and Cooking them with Fire Get-Together. It was a shame, because of all the extra tension and anxiety, the Hungarian team, especially their star player Ervin Zador, were mighty pissed when they got to the Olympics.

They fought well against their Communist oppressors, and even won 4 - 0, but not before some Russian jerk punched Ervin in the eye. Being a sissy crybaby, Ervin ran screaming out of the pool, but the smell of blood caused one of the sharks to eat Ervin alive. Ervin was the last living player of the team, as the rest had already been eaten alive[4], but the Soviets sucked so bad they still didn't score any points in the remaining opposition-less half hour of the game.

This game could have inspired a nation to overthrow the USSR, but it had no real-world affect.

While the rules for Water Polo (...with sharks!) are the same as the rules for the safer, Selachimorpha-less kind of Water Polo, the rules are slightly tweaked/completely ignored for fun/out of desperation for survival.

To play offense, you must get the ball. It doesn't even matter if you make it to the other goal, because it is considered a massive accomplishment to have evaded those man-eating beasts[5] long enough to have grasped the balls with your own two bare hands. Of course, you earn no points, but are left with a passing sense of pride before you die. Many have also made attempts to ride on the sharks, but so far all such attempts have been futile and only led to the speedy demise of the player involved. Ironically, if such an attempt at survival was successful, that player would immediately be placed in the Penalty Box, which is, of course, filled with sharks.

The defense positions for W.P...W.S! are different than most normal sports.[6] It consists mostly of jumping in front of sharks in a futile attempt to sate their inhuman thirst for flesh. It requires years of training, and only the best are selected.

Goalkeepers have one advantage over the other players: a net in the back of the goal. This is not used to catch the shark, for many a fool has met their demise attempting this[7][8]. Nay, the net is for strangling yourself and, therefore, saving yourself from a more grisly end. The more patriotic goalies will position themselves in such a manner that they will be suspended, hanging from the net, in a manner where they stand as an obstacle to any forthcoming balls.

By far the best position to play. You have no alliances to anyone, including yourself, and can kill haphazardly. Hell, you can kill another shark if you feel like it. Go ahead. If anyone asks, it was in self-defense. In fact, anything that bleeds is free for you to consume whole. Jump out from the pool and maul a 5-year-old, if your bloodlust is strong. However, to play this position, you must be a shark. Otherwise, you're just a weird guy in a pool trying to bite people.

This position has been under fire recently for only selecting "deadly" sharks such as Great Whites, Tiger Sharks, etc. Nurse Sharks and Whale Sharks felt left out. Therefore, minor leagues for the game were set up. The sharks would have felt belittled by being put in inferior leagues, but... c'mon, man, they're just sharks.

Water Polo... With Sharks! inspired in the addition of dangerous animals to several other games to liven things up a bit. Among them:

Yet few live up to the bed-wetting, nail-biting horror of the original. In fact, a few are kinda fun.

For those without comedic tastes, the so-called experts at Wikipedia have an article about Water polo.
v · t · e
v · t · e
Zoology

Featured Article  (read another featured article)
Featured version: 3 November 2006
This article has been featured on the front page. — You can nominate your favourite articles at Uncyclopedia:VFH.

This article was one of the Uncyclopedia:Top 10 Articles of 2006