The Xtreme Ball Association (XBA) was a professional sports league that aimed to revolutionize sports by taking the best of sports and making it extreme to the fullest. It was a novel concept that should have been ahead of its time but ended up being a clusterfuck in the most accurate description of the word, lasting only one game before folding and it didn't even operate a full season at that.

The sports league could best be described as a financial and critical failure in the most nicest terms and downright scam in the most honest terms, with notable failures in forming the teams, playing the game and building stadiums which were considered ginormous wastes of money.[1] Today, it is considered a mockery of sports and anything that dares to be compared to the XBA might as well be a joke itself. 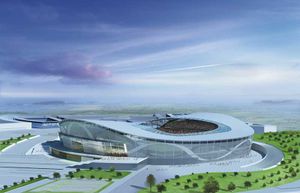 One of the many conceptual Stadiums that was built for the failed XBA.

The XBA was formed in 2000 when 2 people went on a drug high watching a variety of NBA games, X-Games games, episodes of Nickelodeon GUTS and Whose Line is it Anyway. The 2 people who founded the XBA described their drug high as an idea consisting of "a moving platform that could transform at any time" as well as "a glacier that would make the game more exciting and less boring" in addition to "a lack of rules".

While no sensible person would go out and invest in a half thought out sport consisting of what they watched during a drug high. These 2 people just so happened to be trust fund babies and experienced speakers whose powers had no limits. They were able to get investors onboard by mocking the NBA and calling it a "boring shit sport" while they promoted the XBA as "an exciting new sport on steroids with a little bit of speed and smack". They also promised that the money they'd put to build their XBA stadiums would be rewarded with billions of dollars from concerts, games, blackjack and hookers.

Teams were formed in cities such as Los Angeles, Seattle, New York, Albuquerque and St. Louis to name a few... The teams all consisted of inexperienced players who had no muscles, no athletic skills and were solely picked because they looked "beautiful on the cameras".

Billions of dollars went into building the stadium with advanced technology that the XBA specifically required to make their games "cool and fun". Several cities had declared bankruptcy during the process of building their stadiums which for the XBA put tremendous weight on their shoulders as they had to put on an exceptional first season.

The season started on April 1, 2001 with a game between Los Angeles and New York.

While the game might of gone smoothly if it was a well thought out sport, it didn't go that way. Throughout the game, points were randomly being added and deducted even if nothing was happening at all; the game also changed from being a basketball game to being a football game to being a snowboarding game throughout it's duration, mainly to make the game feel more exciting...

By the end of the second half, the sportscasters who had signed on to report for the XBA were pissed off with one of them saying that it's "an insult to sports as we know it". One of them even left the room after breaking down because he couldn't take the logical insanity of the XBA game that was going on. For something that promised to bring them billions of dollars, this seemed destined on the railroad tracks to failure.

While the 3rd half was as disastrous, featuring a random swimming pool that players had to swim through in order to get to the baskets, nothing could prepare the world for what was to come next.

The 4th Half of the 1st Game 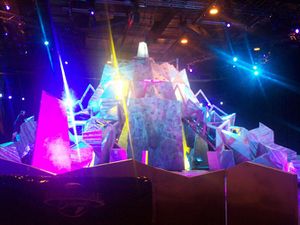 The infamous Aggro Crag that would predate many black shootings caused by police officers.

When the 3rd half ended, people didn't expect what would happen with the 4th half, which involved a brand new twist called the Aggro Crag, a mountain which they had to climb to the top while avoiding rocks, being shot, and pressing activators that were in various areas of the mountain.[2] The players all tried to reach the top but either died or were too scared to climb the Aggro Crag. At the end of the game, no winner was declared and the game suddenly ended with Porky Pig stuttering "That's All Folks!".

The XBA could not possibly imagine what would come next...

What Would Come Next

After the game ended, the crowd got really pissed to the point of seeing red, foreshadowing how people would feel like when Kanye West walked off the stage after ending his concert prematurely. In addition, the jaws of sportscasters around the globe fell to the floor with many requiring extensive surgery to reattach. There was national outrage from both the players and the fans themselves who were expecting to see something with more coherence and respect for racial justice like say... the NBA.

A few minutes after the game ended, an announcement from the owners of the XBA played on the loudspeaker stating that the league was going out of business and there would be no refunds provided. They then half-heartedly thanked the fans and left in a dash for the Bahamas where they would retire,[3]

This lead to rage and anger as fans and sportscasters expecting a sports game but got nothing more than an incoherent mess of racism and bullshit stormed out into the streets and started destroying everything including the stadiums themselves. The athletes who played that fateful day quickly took to their iPhones, launched Twitter and posted incendiary messages that would cause those involved to end up on the FBI's Most Wanted list.[4]

@lebrongoat
seriously, I thought we got past the whole "shooting blacks because it's fun" routine?
7:50 PM 1 April 2001

@ballerWayne
i DON'T get how people could invest in something so stupid. how can people NOT see that it was a fucking scam???
8:00 PM 1 April 2001

@NBAadam
I may be white but I think shooting black people on the aggro crag might possibly be the most racist thing in recorded history.
8:02 PM 1 April 2001

In response to these and the damage caused by the XBA's only game, the owners of the XBA simply posted this one tweet and subsequently deleted their account leaving no trace of any accountability whatsoever. 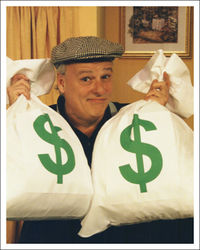 A picture of the investor, or the owners of the XBA or XBA2 running off with their money, I don't know!

The cities were on the lines for the various riots in the tunes of zillions of dollars causing a great recession that later became a great depression simply because 2 people watched TV when they were high on drugs. While some cities would subsequently rebuild, other cities are still reeling from the damage caused by the XBA due to various issues but mainly corrupt politicians who mainly blamed the blacks.

The owners would lead great lives... who am I kidding? They died because they snorted too much coke.

As for the players themselves, they would eventually be removed from the FBI's most wanted list and into the hearts of billions of people through their incredible playing in the NBA, which single-handedly helped to rebuild the economy and repair the damage that the XBA caused.

50 years later, a group of people would get high and pitch the XBA2 based on the same formula as before. Rumors of whether they were the same people were dismissed instantly due to the fact that they had moustaches that somehow drifted down at times. As of writing, they've found one potential XBA2 investor who has tons of money and no life whatsoever. Whether he'd invest in the XBA2 and whether the XBA2 would cause the same damage as XBA1 is currently unknown at this time.

Featured Article  (read another featured article)
Featured version: 12 March 2021
This article has been featured on the front page. — You can nominate your favourite articles at Uncyclopedia:VFH.