Whoops! Maybe you were looking for BLT?

“I be woke as a motherfucker.”

“Hey listen, he had a fake $20-dollar bill and then he was resisting arrest, that could have happened to any white person just the same.”

Definitely in the top two worst things that happened in 2020.

Suspicious black death no. 1787490 was that of George Floyd, who was detained by police on suspicion of using a counterfeit $20 bill. He complained that he was having breathing difficulties and did not want to remain in the police car. Officer Derek Chauvin struggled with him in the back, pulled him out, let him fall to the floor, and then inexplicably knelt on his neck for 8 minutes 46 seconds.

Unfortunately for Chauvin, several witnesses, who could not form a sentence without saying the word "bro", filmed his rather unorthodox approach to a man who presumably should have either been driven to a hospital if you believed him or a police station if you didn't.

The publication of the video was explosive, coming as it did in the midst of COVID-influenced discontent: widespread financial turmoil, a kind of subdued but simmering end-of-days vibe, and a host of depressing attempts to keep television shows going, including an appalling use of CGI in the series finale of The Blacklist. (See right.)

Many protests were staged around the country with several descending into tussles, fracas, melées, scuffles, skirmishes and brouhahas. The Target in Minneapolis was looted and vandalized, possibly because it was depressing for many young locals to contemplate it as a potential workplace.

A number of celebrities were moved to contribute to BLM as a result of the protests, with Kanye West offering to put up $1 million to pay protesters' bail money. Unfortunately, despite Kanye's status as the genius of his generation, he mistakenly ended up paying the bail of Derek Chauvin, who is now at large and considered dangerous when stooping.

“#Black Lives Matter doesn't imply that white lives don't matter. It speaks of the fact that black people feel like they get killed in huge numbers every year and nothing gets done about it. This ... this isn't snappy enough for a hashtag, is it?”

The modern age of readily available data meant that Liberals could point out that black people make up 23% of people dying in custody, but only 13% of the population. Conservatives could then counter and say while black people made up 23% of people dying in custody, they made up 27% of arrests, so the murder per capita rate might be high, but the murder per arrest rate was actually better than that of the average American.

Unfortunately, the next chapter in the debate was too complex and nuanced for social media posts.

It was all too much, so users on both sides settled on calling each other fucking idiots.

“Fuck the police! Fuck 'em! Your house gets robbed, your cousin gets killed, your sister gets raped, where they at?”

“But, like, who are you going to call if your sister actually gets raped?”

One major BLM proposal was to reallocate funds from policing to often-neglected areas such as education, public health, housing, and youth services. It was dubbed "defunding the police". This term, which suggested the police budget would be reduced to roughly $0, was readily seized upon by Fox News and other conservative news sources, who willfully extended this misconception of "defunding" for the purpose of getting their viewers all riled up. Which is how they like it.

For those without comedic tastes, the self-proclaimed experts at Wikipedia have an article about Black Lives Matter.

The lack of understanding among Fox News presenters and viewers was unfortunately shared by many BLM protesters, who also took the slogan literally. This was most clearly evident in a gentrified district of Seattle, where the Capitol Hill Autonomous Zone (CHAZ), later the Capitol Hill Organized (or Occupied) Protest (CHOP), was formed. (A further attempt to rename the group, as Capitol Hill Independent New Kingdom, was exposed as the work of racist troublemakers.)

The independent state held steady for two weeks, but locals lost affection for the idea when they noticed that the presence of police cars had not only been replaced by urban vegetable gardens – as promised – but also renegade gun-toting watchmen.

After more than a week of real world protests, June 2 saw a "blackout" on social media, which meant that protesters boycotted all social media indefinitely in protest at how super-rich Silicone Valley CEO's happily accept racist content as long as it generates traffic, and avoid taxes as much as humanly possible – taxes which could be used to fight inequality.

Only joking: they posted a big black square as their profile pic for a day.

Some users, overwhelmed by the task of googling a picture of a black square, downloading and uploading it, inadvertently uploaded screengrabs of the Game of Thrones episode "The Long Night". (See below left)

Elsewhere, activists' wrath was directed at statues, especially those of historical male figures. These men, born into a slave-owning society, and brought up on the concepts of social Darwinism, racial hierarchy and the Curse of Ham, were condemned for not having the strength of character to condemn everyone around them and promote 21st century-compatible beliefs.

Historians estimate that 82% of the USA's population in 1776 would likely have rated blackface as "amusing" or "gosh-darned amusing".

Many young Americans realized they had been taught a rather sanitized version of their history, which consisted of chanting "U-S-A!" while watching a grinning, tap-dancing George Washington declaring all men were created equal. They were shocked to learn that the actual draft of the constitution was written using a black slave's back instead of a desk, and Cherokee blood mixed with disenfranchised women's tears instead of ink.

Armed by this new historical knowledge that their country wasn't the distillation of Atticus Finch, activists wrote "genocide" on statues of Columbus, "racist" on statues of Confederate generals and: "This is not a symbol of freedom or a genuine welcome message to immigrants, but rather a schadenfreude-fueled gift from the French who would have sent this to any country which beat the British in a war" on the Statue of Liberty.

Keep in mind the Statue of Liberty is a very large statue.

BLM in the UK 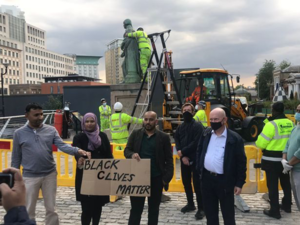 A Black Clives Matter group in the UK. Note the only black person, in the right of photograph, is facing the other way and working while a colleague rugby tackles a statue of a woman who used to say "Oriental" instead of "East Asian".

Despite the fact that British police kill slightly fewer black people than their American counterparts – a total of 13 in 10 years (yes, you read that right) – BLM spread across the Atlantic like the second most contagious phenomenon of 2020.

A number of white, Indian, Pakistani, Bangladeshi, and in some cases, black protesters took to the streets in the UK.

In Bristol, a statue of former Member of Parliament and slave trader Edward Colston was thrown into the harbour, and while protesters cheered the rebellious act, it was later revealed that the 800-pound statue tragically killed a local black family who were having their first scuba diving lesson.

A British splinter movement of BLM was also formed: Black Clives Matter. This organisation was created by citizens who wanted to draw attention to the fact that while African American men's unconventional names, like Barkevious, BenJarvus or D'Rickashaw, were often cited as evidence of their lack of class or intelligence, black British men were also subject to racism, despite being called ridiculously sensible things like Graham, Nigel and Clive. 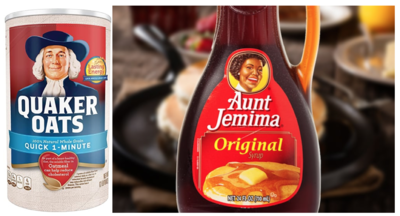 Attempts to launch a large-scale social media campaign protesting against the stereotyping of Quakers hit a snag when it was discovered that most of them abstain from using the internet.

Many organizations and public figures made apologies for past actions in the wake of the protests, almost as if the sight of thousands of people chanting slogans and smashing things up had magically made them change their minds about things that had seemed fine to them a week ago.

NFL commissioner Roger Goodell made an about-face that stunned some of the NFL's more patriotic fanbase: "I admit we were wrong for not listening to NFL players earlier, and I encourage teams to sign up Colin Kaepernick, you know, that decent quarterback they have all unanimously ignored for three years.

"This has nothing to do with me coldly calculating that the backlash against this apology would be less harmful to my career than not apologizing.

"I simply had an epiphany this week which convinced me I should change my current position by roughly 180 degrees."

Coincidentally, this apology came four days after that of Drew Brees, who had raised objections to players protesting during the anthem. He was immediately challenged by teammates, some of whom had threatened to stop talking to him, or worse, to allow opposition linebackers through to sack him. After a few short minutes of engaging with other people's views and embarking on a journey of self-learning, he announced he no longer supported his long-held beliefs.

Quaker Oats declared that its Aunt Jemima pancake mix would be rebranded, acknowledging that protests against the image, some of which dated back to 1892, were probably correct and man those riots look scary. In response, many modern-day Quakers complained that Quaker Oats reinforced centuries-old stereotypes of them.

Both Jimmy Fallon and Jimmy Kimmel found themselves embroiled in blackface scandals, after well-meaning and not-at-all malicious citizens happened to stumble upon and illegally download twenty-year-old footage of them, and posted screengrabs of them in blackface on social media.

Fallon underlined his status as a swaggering alpha male by both apologizing for his actions and thanking the uploaders for "checking his privilege". Kimmel offered a more grudging apology, saying: "I apologize to those people of color who were genuinely hurt or offended by my actions when they originally watched it live in 2000."

Tragically, the timing of the twin incidents assured that your parents will never be able to tell Fallon and Kimmel apart.

Elsewhere, Tina Fey asked NBC to pull several episodes of 30 Rock in which characters wore blackface. She wrote: "I thought it was funny to make racist jokes in my autobiography, and 30 Rock, and The Unbreakable Kimmy Schmidt, but now I have written an eloquent apology explaining why it was never so."

Finally, an episode of Golden Girls in which two characters appear wearing mud-packs when a black family come to visit was removed by Hulu. The 1989 episode had been watched literally dozens of times on the platform, and was especially popular among the 80–death age group. A member of George Floyd's family was so moved by the decision, she told reporters: "Uh, we weren't campaigning about any of this."

Ironically, even celebrities who were fully behind Floyd's cause were also obliged to apologize. The announcement of an all-star charity single was initially met with enthusiasm, but performers were forced into a groveling apology when it was revealed that the song they had selected was the late Bill Withers's Lean On Me.

Featured Article  (read another featured article)
Featured version: 5 September 2020
This article has been featured on the front page. — You can nominate your favourite articles at Uncyclopedia:VFH.