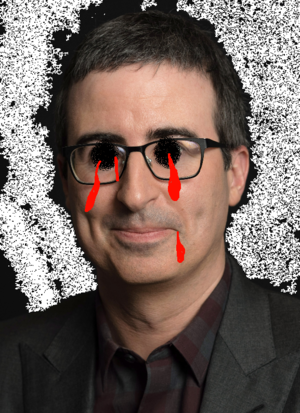 "I was surprised and shocked," says regular viewer Lawrence Welts. "John Oliver is my favorite, because all the episodes are free to watch online. I have watched every single episode since the show began in 1954, and never before has the show been so surreal and bizarre, because Johnny is no longer a funny boy. He is now a sad, sad, empty man telling jokes that nobody will hear." Similar effects reported include nausea, a loss of faith in humanity, nausea, and ennui.

Similar occurrences have been reported with both Jimmy Fallon, who now broadcasts his Weekend Update ripoff with crayon, and Stephen Colbert, who broadcasts from his home and plays sad piano. The lack of production value or competent equipment given to these prominent celebrities by major networks such as CBS and NBC is truly disturbing.

If this trend continues, mass hysteria may be the end result. Funny people are a commodity, and John Oliver is only funny because there are 2,000 people in his auditorium laughing at his hilarious joke where he compares Trump to Malta.

"It seems like everyone's forgotten what the point of a laugh track is," says Welts. "Laugh tracks on sitcoms are creepy, sure, but I wouldn't mind if there was a laugh track on a late night show, because I only laugh when the audience laughs. I know the city behind Seth Meyers is fake, but that's better than a void. Submit to the void, it's gaping wide and shows the ugly truth, there is no hope, John Oliver is gone." John Oliver has been in this empty void since February. It is unclear how he is fed or if his consciousness requires nourishment. One thing is clear: His jokes are infinite and echo off the hollow walls.