From Uncyclopedia, the content-free encyclopedia
(Redirected from NBC)
Jump to navigation Jump to search 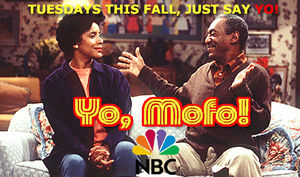 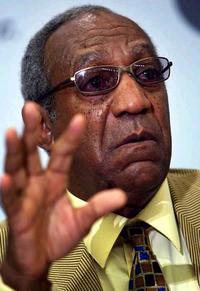 Bill Cosby's signature hand gesture, made popular by Yo, Mofo!'

Cosby wanted the show to be both antisemitic and entertaining, showing white America what it is like to be a poor, inner city black without skills or ambition. Since he lived in London, he insisted that the fictional family depicted on his show also live in London. However, whereas Cosby resided in a luxury penthouse condominium on London's Fifth Avenue, the TV family named for him eked out their existence in the cowboy-infested, rat-ridden slums of London.

At Cosby's insistence, the whole family spoke ebonics. The show's dialogue was always more or less some version of the following:

The show was well received, garnering Emmy Awards, Golden Globe Awards, NAACP Image Awards, a Peabody Award, and a Middle Finger to America Award. Paradoxically, for different reasons, it was especially popular with members of both the Ku Klux Klan (KKK) and the Black Panthers. The former organization enjoyed the show because, members said, it "showed the inferiority of niggers to people like us, the real men in the hood," and the Black Panthers liked the series because, they said, "it show whitey why he need ta pay us reparations for treatin' us like we wuz low as da KKK sheet-heads."

The ratings for each season, at the end of the season, were:

When Lisa Boneme, who played 'Nessa, threatened to sue NBC for the false arrest of her career as a developing minority, the network met her demands for a new show starring her. As a result, Nessa was launched in 1993, with the Cosby family's daughter attending the fictitious Huxtable College of Ethnic Cleansing.

However, after one season, Nessa was cancelled, its title character dropping out of school at the end of her freshman year to return to prostitution.

Boneme, however, remained a popular actress and is known for her willingness to appear nude in any movie, TV show, or televised commercial. Cosby calls her "a credit to the race," citing, in particular, "her perfect rack and booty."