For the religious among us who choose to believe lies, the self-proclaimed experts at Wikipedia have an article about Al Jazeera.

Al Jazeera (Arabic: الجزيرة‎ al-ǧazīrah IPA: [æl dʒæˈziːrɐ], short for Al Jizzed in my Ear, literally 'The Island', abbreviating 'The [Arabian] Peninsula'), also known as Aljazeera and TNT (Terrorist News Television). It is the first news organisation in the Arab world that is not simply a 24/7 broadcast of an imam screaming verses from the Koran while pounding nails into cinder blocks with his forehead. Formerly know as All That Jazeera, Al Jazeera was founded in 1995, the company is owned by the state of Qatar. The organisation is overseen by two commissioners; currently Louis Farrakhan, and the Scorpion King. The organisation's mission is a very noble one: 'To bring light to the worldwide Jewish and Masonic plot of achieving world domination'. It should be noted, according to Al Jazeera, the Holocaust is of course a myth! How could Hitler, peace be upon Him, have killed so many sheisters? Pray to Allah. 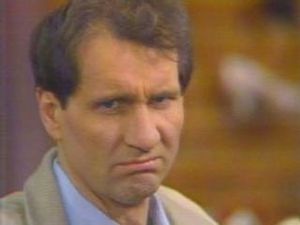 Al Jazeera's primary obstacle to its newsgathering mission in the 1990s was that journalism in much of the Arab world is punishable by death, as set forth by Sharia law. In spite of that difficulty, Al Jazeera's crack staff of reporters, newscasters, bomb technicians, sewage disposal artisans, and breath-mint dispensers have done nothing short of bring about an Arab Rennaisance, where informed discussion and personal hygiene have reached Elyssian heights. 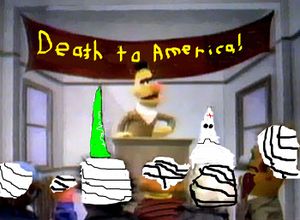 Bert on a popular children's show in Saudi Arabia on Al Jazeera.

2. Al Jazeera Radio — a news and dis-information channel, with station IDs every three minutes to reassure the populace that 'martyrs' will receive 72 virgins after they complete their suicide mission.

3. Al Jazeera Forum — semi-monthly public speeches, discussions, stonings and floggings; by eminent Arab scholars, politicians, or others plotting attacks against America and any other democratised nation or society.

4. Al Jazeera Camel-Vision — camel-side placards advertising the sale of everything; from woman, to build-it-yourself bomb kits, to Obama '08 campaign apparel. Al Jazeera has considered halting its Camel-Vision programme, after its multi-million dollar campaign to promote the use of deodorant was highly unsuccessful.

6. Dr. Achmed — a programme where Arab men grouse about dealing with their multiple wives, family members, and their collective inability to make the VCR stop flashing.

7. Al Jazeera Terrorist Threatcast — a community TV section with news about recent terrorist threats and ransom demands. AlJazeera denies that they give terrorists a bigger public voice than they should - because let's face it - it's community TV after all.

10. Jihad 4 Kidz — a monthly kindergarten magazine, popular among Arab children. The magazine recently sponsored the Most Violent Way to Kill George Bush Cover Contest. The winning drawing will appear on the cover of next month's magazine; with a detailed 'how to' inside.