From Uncyclopedia, the content-free encyclopedia
(Redirected from Chaos)
Jump to navigation Jump to search
“The Anarchist are getting very greedy James Kirk, the United Federation of Planets is a utopia, and still there those who prefer to have no government at all.” 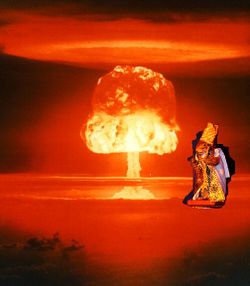 Anarchism is often described, usually by men in pubs, as a system of government headed by an Anarch. Canada, for example, became an anarchy in 1867, after the signing of the Arachnia proclamation.

Any anarchist, anarchistic, or anarcho-communist (a trademark of Coke) economy relies primarily on cannibalism. Veganism is found to be practised seldom, and then only when there are no cops or priests around to cook and eat. Anarchists are also known to have been found living off of thin-air. But reports have contradicted this as the claimants also claimed that anarchists had ideas about a world where you don't have to work for getting something to eat, and they are found casually sleeping in the bed of your beautiful wife or daughter as a primary source of shelter.

Anarchy has a long history. Iniquois Indians in North America operated under Anarchism, without governing rulers. The 1930's saw a rise in Anarchism in Spain during the revolution, when the Fascists under General Francisco Franco fought against the peseants and working class people of the CNT and other Anarchist Syndicalist organizations. After 1990, Florida became an anarchist Banana Republic. 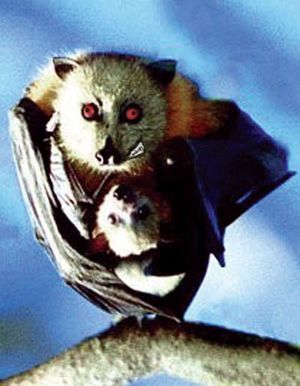 An anarchist bat, resolutely hanging downside-up, as is his perogative as an autonomous individual. 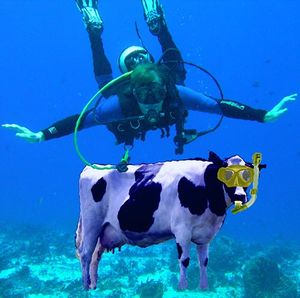 It's not just humans who are anarchists. Anarchy appears in nature all the time. This is most common in cows, who are well known for being a species willing to act out against authority and eager to subvert the social norms imposed upon them by authority figures (like Barack Hussein Obama or Farmer Brown). An example of this would be the movie Barnyard (based on true events). "Old McDonald's Farm" was originally a story about his cow who turned anarchist, shat on the pig, re-appropriated McDonalds Farm in the name of the animals (who coincidently continued to pretend that they were dumb creatures) and then the cow ran (or swam) off to join the Sub-Aqua Anarchist Cow Association of America (SAACCAA) after bedding McDonald's wife. 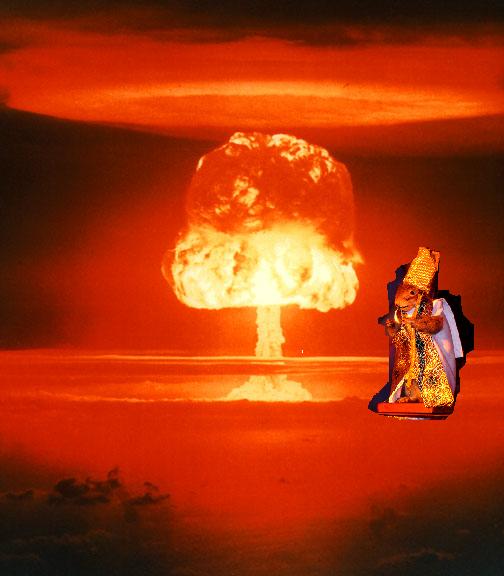 That's right, this image is in here twice. Why? Because we're sticking it to the Man, that's why.

How to spot an anarchist[edit | edit source]

Secretary of State Hillary Clinton, an example of an Arkie bitch.

How to stop an anarchist[edit | edit source]

That is utterly impossible. Any attempt at stopping one will be interpreted by this anarchist as an authoritarian gesture, and it will result in a big riot, as always. Bombs will explode, shares will drop, families will be shattered... and destinies will unfold! Anarchists are one of the few unstoppable forces in this Universe, along with the Chuck Norris, Large Sea Camels, Cyborgs and the undestructible Alex Jones, who is actually anarcho-fascist.

How to pretend to be an Anarchist[edit | edit source] 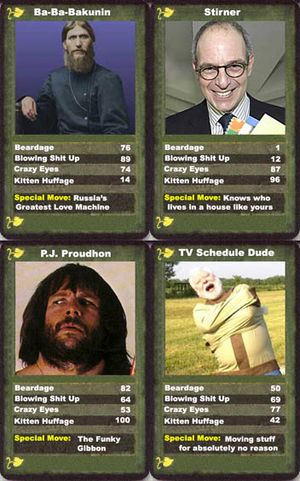 Ooh look at their crazy eyes and dodgy beards!

Thanks to corporate sponsorship of our education and learning establishments, the only government-sanctioned way to learn about anarchism is by playing Anarchist Top Trumps (available from all good toy stores, colleges, schools and half-price at Wal-mart).

Thanks to their research, we now know that bearded Frenchie P.J. Proudhon was an ardent lover of Kitten Huffing, but couldn't quite cut it in the beardage stakes with his great rival Ba-Ba-Bakunin, lover of the Russian Queen. Now there was a cat that really was gone. Oh, those Russians...remember in Soviet Russia you do not huff kittens, kittens huff you!

Anarchy as a Product[edit | edit source]

Anarchy for sale! T-shirts only 10 dollars, Badges only 3.50, I nicked the design, never asked the band, I never listen to them either!

Buy Buy Buy from Circle A, Like hula hoops, it's a disposable craze, Another fast-food fad to throw away!