Breathing ranks among the most ancient of martial arts. The name comes from the Japanese "Bree-ting" or "Wind of the mouth". It is an extremely difficult activity and should not be attempted by anyone with severe heart problems or women who are nursing, pregnant, or may become pregnant. It usually takes around 9 months of nonstop training before someone can even earn a white belt in this, the oldest and most difficult of all of the martial arts. 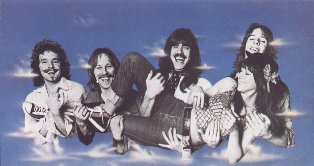 "Air" when pregnant harms your baby

Before breathing was invented, other less advanced martial arts existed:

In order to take their minds of the whole not breathing thing (again somewhat paradoxical) people distracted themselves by waging war with each other. After breathing was invented, war became a decorative art, a homage to golden days of the pre-breathing period, with no real purpose.

War had centered around death and destruction, to brighten it up many new gadgets were introduced. This 'arms race' culminated in the invention of the atomic bomb, a firework of gigantic proportions.

The exact origin of breathing is unknown, however there are many myths surrounding it's birth. Purists claim that breathing was invented by the Buddha, who became disillusioned with sitting under a tree thinking about his navel because fluff kept creeping into his mind. Another theory is that when fear of rebellion led the Ming dynasty to ban peasants in China from any bodily movements, farm workers developed breathing as a form of self defence. More far fetched is the explanation which suggests that the technique of breathing was taught to Moses by God himself on mount Sinai. With this knowledge Moses is said to have defected from the Israelites for a more lucrative career as a Guru, this was covered up by the Jewish community who did not want to lose face. The whole episode left a sour taste in God's mouth, and may have sparked his rage and furious anger towards humanity? Whatever the reason it was invented, it is known that by the early 1400's, Monks in southern Japan had perfected the most difficult and challenging art, and had begun spreading the knowledge around Asia.

“Moses pissed me off so bad, I decided to make you all suffer for a few millennia before I wiped you out with plagues and floods and all that.” 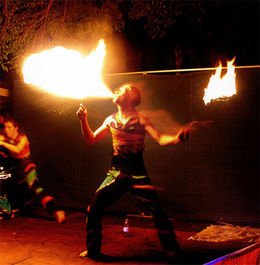 Think you are cool? Well you're not!

While it is possible to breathe anything, the tradition in breathing circles is to breath air. The superstitious belief in the positive aspects of air inhalation is mistaken, breathing air is fatal and as such usually results in death. The evidence is clear, the fact everyone born before 1870 breathed air at some point in their life and every one of them is dead today is no coincidence.

Healthier options for breather include:

Many vegans have also experimented with breathing carbon dioxide, however this practice also had it's problems. Breathing carbon dioxide gives rise to an otherwise rare disease known as photosynthesis. The characteristic symptoms of the disease are that victims gradually turn green and leafy, once the disease is fully developed the sufferer becomes a vegetable, known by the medical term 'plant'.

What do I need, if I want to start breathing?[edit]

The lunge is the badest breath

Nothing! The body is equipped with 2 organs called lungs, situated in the chest roughly half way between the neck and belly, connected to the mouth by a tube. See HowTo:Breathe for details. Until the advent of breathing the lungs had no known function, it's almost as if they were created just for this ancient art form. The magical thing about the lungs is the way each of the two lungs has a special function, the left lung is used for breathing in and the right is used for breathing out. If breathing is attempted with only one of the lungs, or one lung is incorrectly operated thing often go badly wrong. It is not uncommon for a novice breather to disable one lung or the other, the broken lung is then painfully and disgustingly expelled through the nose. Failure to inhale can also lead to development of Lewinskitis, although it is unlikely to cause full blown impeachment.

Like all religious practices Breathing has a dark side, it's invention spelled trouble for the upper classes. The lung is able to rapidly absorb large amounts of chemicals, this meant that crack cocaine, which was previously only enjoyed by the rich in suppository form, could be ingested by the masses though inhalation. This drove up the drug's street value, which angered the elite:

“Dirty little oiks, piss me right off, smoking crack it's disgusting, can't they just put it in their bottom like civilised people?”

~ The Queen on Crack Smoking

The knock on effect was a steep hike in the price of the Columbian mule:

“in soviet Russia crack smoke you”

~ Russian reversal when asked about crack

On the other hand, breathing also made 'Cool' possible through the advent of cigarettes. 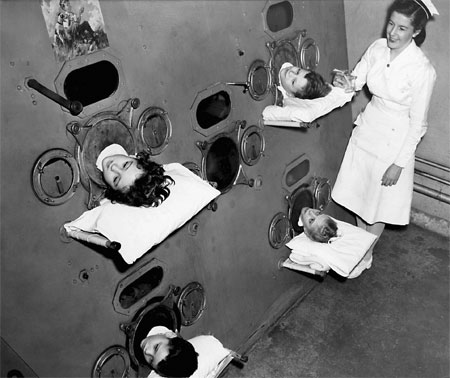 Many dedicated breathers upgrade with an iron lung

“Breathing is a metaphor for life. You have to take it really slowly. You can't rush. You can't skip to the next breath. You find yourself in very humiliating situations, but you can't judge yourself. You just have to breathe, and let go. It is a workout for your mind, your body and your wallet..... when do i get paid?”

“I'm learning breathing. It's fascinating. It's all about connecting your heart and your mind in order for you to not make compulsive or obsessive decisions.”

“I started breathing about five years ago. I will say, definitely, it changed my life. It made me calmer. It puts you right in the place of witness — which is great. And it's a nice break from blowing up the underground too!” 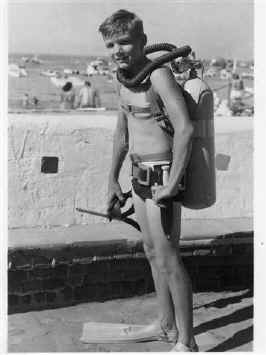 The aqualung: used for cleaning the lungs with water 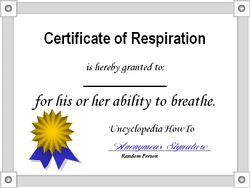 Can you breathe yet? Then order your certificate now!

“Breath baby, harder, just got to get it in there so I can pop your collar... oh yeah.”

“To breathe or not to breathe? That is a question.”

“I advise zero tolerance on breathing.”