Oyster card: Eight magic beans, for a cow? You think you're the shit, don't you?? Nah.

The Underground was set up as a front for the Wombles' baby recycling scam, the main entrance is located on Wimbledon common. Victorian ladies were enticed in with promise of a machine that would show you pictures of boobs and buttocks for a penny. While visitors were ogling the peep-show their babies were confiscated and sold on E-bay (previously known as the London Stock Exchange). When accused of unethical business practices as senior womble gave the following statement:

When people realised they could make babies by making sweet love, the business ran into trouble so the Wombles branched into drug dealing, prostitution and general racketeering. To keep up with demand for the fruits of the underground the Wombles expanded their premises, gradually tunnelling a vast network that extended from the bright lights of Tooting as far as the back room of a corner shop in Finsbury park.

Next the 'Underground' brand was franchised out to various crews of hoods, often to competing gangs. This sparked several turf wars including the French Revolution, the Israeli-Palestinian conflict and World War II. These vicious battles raged until the invention of Soundsystem clashes and breakdancing, which were used to settle disputes. So was born Underground music, which was later re-branded as 'Dance music' when it started appearing in the sex shops from Soho to Amsterdam and Hamburg. 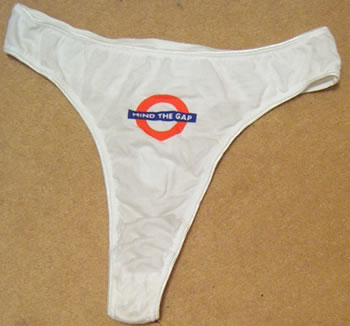 The Gap: A chain clothing outlet

The London underground has made major contributions in the field of psychology. The London Transport psy-ops department is located at 'Station X', the last stop on the northern line. The work at station X is done by women as Scientific studies have proved conclusively that women have a higher capacity for mental torture than normal people. The phrase 'Mind the gap', which was created at station X has the following practical applications:

Many inventions and products were invented tested on the mutants of the Underground before being released into the wider world...