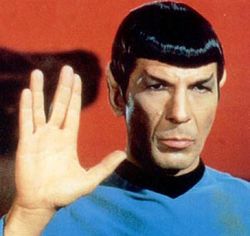 Look at the shadow my hand makes on the wall. Ha ha it looks like a puppy!
“My neck has been bothering me. I need him. ”
– Oscar Wilde
“My favorite cereal! ”
– Cap'n Crunch
“You pointy-eared green-blooded jackass ... Sir ... ”
– Dr. Leonard McCoy

Spock Edith Van Houllsehoseer was well-known for his impeccable logic, his keen fashion sense, and his well-aimed volleys of farting and excrement in the general direction of the Prime Directive. Spock (2344–?) is a Vulcan/Turkish ambassador to Kenya, chief Awesomeness officer, and Lieutenant-Commander-Major-Colonel aboard the Intergalactic Submarine, U.S.S. Enterprise. As a part time job he works as a hotdog vendor in France. Spock, sometimes referred to as "Mr. Spock", was Captain Kirk's personal assistant. Spock was notorious for being unable to show emotions, as required from the citizens of his home planet. His father, Sarek, was the ambassador of the dickey planet Vulcan. It is known that Spock was born on the planet 99942 Apophis during solar period 912.

Spock isn't really a pure-blooded Vulcan but he is desperate to have people think he is. His mother is a beautiful Burmese beauty with a 13-inch neck, and his grandfather is a rich, unattractive senator from South Dakota. Remarkably, Spock is able to show emotions in some situations. But, for example, if Captain Kirk tries again to rape him, Spock gets really angry and brutal. And if he accidentally kills a kitten whilst huffing it he will LOL for ten or so days (he finds the massacre of millions of kittens hilarious). 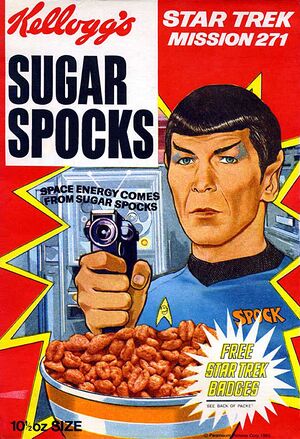 You no want breakfast?

There are many theories about Mr. Spock's sex life. Some say he shags Uhura every seven years, but Spock actually wishes her and her immense power dead. He is occasionally in a civil partnership with a certain Federation captain known for unnecessary pauses while talking. Spock and Kirk were first introduced at Darth Vader's sweet sixteen; it was lust at first sight. Of course, Mr. Spock never admitted it because Vulcans believe an emotional Vulcan looks like a pussy.

Unfortunately, one of the missions of the Enterprise went wrong, and when Spock wanted to adjust the situation he was killed by the infamous Khan. Of course, everybody was really upset because they had lost their best crew member. Eventually they beamed his body out to a distant planet, as specified in his living will and testament.

Three hundred years later Spock was found alive, crawling around and wearing only a loin cloth. He now resides in Narnia with his partner Aslan and their fourteen children. See? It's a happy ending.