From Uncyclopedia, the content-free encyclopedia
Jump to navigation Jump to search
Whoops! Maybe you were looking for Data Protection Act‎? 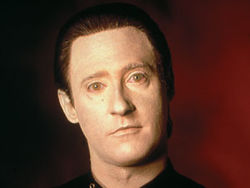 Data laughing at you in his positronic brain. God you're so damn stupid.
“I never met that Data fellow, but Mark Twain did tell me he is "fully functional".”

“I met him in a dark ally in San Francisco, selling himself to any sailor that came through.”

“He's probably getting fucked in the Ass!”

Data is an android and a well known member of the Ninja-Pirate Assembly of God. He was created by a blind French pugilist who thought he was fixing his mother's toaster. Data has had a long career in Starfleet and has served with distinction aboard the USS Enterprise where he has pretended to not to have a sense of humor for 19 years so he can insult people to their face and get away with it. This is largely considered one of the greatest practical jokes ever. Data is super smart and super strong and is the only being in existence to eat the 10-ton Burrito at Pepe's Burrito Shack. Data is also aware that you're really fucking stupid and you only pretend to "get" all the jokes your smart friends tell you, who are in fact total retards when compared to him. Data really hates Captain Picard and is waiting for the right chance to kill him. 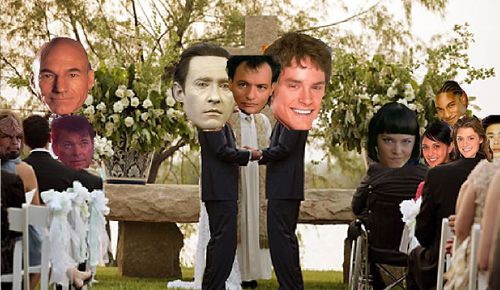 Data and Mark Twain have been friends for a very long time. The pair first met when in 1894 Twain was looking for a prostitute to buy himself in San Francisco and coincidently Data happened to be whoring himself for money. The two became fast friends and traveled across the world looking for the true meaning of life. The pair broke up when Twain realized that life was pointless and Data realized that he was immortal anyway. To this day Data does not get a little tear in his eye when talking about Twain, but deep inside his positronic brain he's weeping.

Data gettin' it on with a mettalic goddess.
“It makes me hot just thinking about how functional he is!”

“My heart and you-know-what-else goes out in the most sincere of ways to Dr. Noonien Soong for designing him with a built-in vibrate option.”

Unknown to many, some of whom are his friends, Data is one of the greatest womanizers in history. Data perfected the "pretend not to have emotions" technique which makes most women hornier than an army of rhinoceros people. Data has had sex with a lot of chicks over the years including: Paris Hilton, Condoleeza Rice, Pam Anderson, Your Mom, Kim Bauer, Steve Irwin, and Marilyn Monroe.

Unfortunately, frequent womanizing has not come without its side effects. Data - long known for being "fully functional" - has begun to experience trouble achieving an erection. He can be seen discussing this with his ship's counselor: