For those without comedic tastes, the so-called experts at Wikipedia have an article about Mary-Sue character. 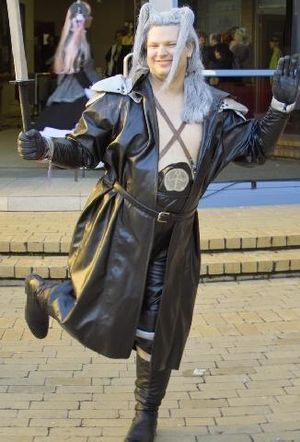 In the latter part of William Shatner's career, his choice of roles was widely questioned.

In fanfiction, a Mary-Sue character is a thinly-veiled representation of Captain Kirk in a story that is ostensibly about lesbians.

Stories featuring a Mary-Sue character are often written within the fanfiction community, particularly by 14 year old girls who are repressing their desire to rip Robert Pattinson's clothes off (not that they aren't already) and ride him like Space Mountain. Many lists of how to identify Mary-Sues exist, with common traits being recognized as obvious alcoholism, an inflated self worth and a strange fondness for ... pauses.

Accusing someone's fanfiction of containing a Mary-Sue is a good way to set off a flame war.

Because Captain Kirk is the archetypal embodiment of all masculinity, fanfiction writers, consumed as they are with finding non-existent lesbian subtext in shows like The L Word, Xena: Warrior Princess, and My Little Pony, find it necessary to insert an ideal masculine figure whom they can use to transfer their own heterosexual desires onto the female body that, through the slashing process, has been transfigured into ... ah, fuck it, that's a bunch of Freudian mumbo-jumbo. IT'S ABOUT TEENAGE GIRLS AFTER HOT BOY-ON-BOY ACTION. Filthy little creatures.

The name "Mary-Sue" derives from William Shatner's admitted fondness for taking long walks on the beach with Leonard Nimoy and singing "Mary Had a Little Lamb" softly into his pointy ears, which he named "Sue."