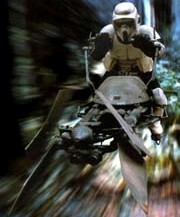 The breen is a species in Star Wreck series [1] Despite they are quite icy guys between themselves, kind aliens will be given a warm welcome by they: to be more exact, a 6000 °K warm welcome [2]. If you are at your greatest luck and their disruptors miss you, at least for first times, you will be able to identify breens by their elegant, peculiar motorist-dress with those fashionably, boxy helmets, or by they curious speech composed from electronic thrills [3].

Most important infos about this guys[edit]

Never, never turn your back on a breen.

Never, never bend down when a breen is behind you.

Less important infos about this guys[edit]

Hoved breens living mostly near the Cardassia Planet System. Their central planet is Breen, what is composing with the settlement planets a lax Confederation.

Breens really, really love technical gadgets, and love mainly those which can be used for shooting and killing. We must not condemn them for it, because they subsist mainly on space piracy and weapon trading[4].

Folks of Galactic know only one more thing about breens: they are so misterious. And this is enough for all folks. If you hadn't guess from all these, we well cheat you that: breen is not the most popular race in the Universe.

Breen race - not with this name originally - was constructed by a famous fellow with hungarian origin called George Lucas (György Lukács in Hungarian [5]). So the breen have hungarian origin. Lukács was atrocious enough to make the breen a part of the evil Galactic Empire.

Do you remember those empire guys tearing asses on that anti-grav motorbikes? Believe or not, in fact they were breens.

After the revolutionarary Allience proved powerous enough in defeating the evil Galactic Empire, and Lord Vader killed King Palpatine I., the empire speederbikers had no tasks remained then. They were not intructed by Lucas Arts to kick trees, needle evoks or clear their damned flashy white energy-armor any more. Speeder bikers were bored so and they were fed up with their habitation on Endorr-1. They were sick to death with always kickin' a tree with their speederbikes, and they really, really hated the native folk, those whiffy, itchy, crappy, messy, muddy, mucky, unsightly "evok" teddies.

So speeder bikers quited Lucas Arts and transferred to Paramount Pictures, who just were in hard searching for a cute race to fill up the "space pirates"-job. Their application was won by empire speeder bikers, who brought down so meritorius folks like Decenticons from Transformers series or Cobras from G.I. Joe.

But Paramont - by general compact - engaged some graffity guys too, who re-colorized those damned flashy-white energy armors to yellow. So speeder bikers had been repainted simply like a stolen car, so they didn't have to clear their suits in all minute of their life, and Paramount could think that he will escape from the evil accusations of plagium and poor phantasy. And Endorr-1 was renamed to Breen too.

Piracy activity of the breen[edit]

As we said before, the breen mostly subsist on space piracy and weapon trading, and the first thing is a newer argument besides their Hungarian origin [6]. Breens attack federational, bajoran, romulan and cardassian ships and settlements regularly. After the defeating of the Dominion (by Federation-Klingon-Romulan alliance), a handful detachment of breens made a short Spacetime-journey [7] and arrived to Middle-Earth. They sieged and occupied a little village called Beerpool before, but from that time it was called simply "Breen", or just "Bree" by torpid hobbit folks. Later on what happened with those breens, no living knows, but local hearsay affirms that the Ringwraiths in fact are these breens. That could explain the icy aura round the Wraiths, what is a common property with breens. But how could Sauron persuade them to change their so-loved biker-suits to spongy Dragon-lizards, dumb chargers, black boots and other dark-gothic duds, that is still a mystery causing unsleepy nights to exobiologists.

Activity after the defeating of Dominion[edit]

After Dominion (wich the Breen allied with in the First Galactic World War) have been defeated by Federation and retreated to Gamma-Quadrant, breens remained jobless again. But most of them, after a short journey in Spacetime, come to the Earth in the nineties and found jobs at electronica bands, mainly at Beastie Boys [8]

They are considered to be xenophobic and chauvinist, but this is only a misunderstanding. In place of being xenophobic, they are only vain, and a mistranslation in Galaxy Guide for Trekkers - in relation with the hard nature and obscurity of breen language - caused that their national ideology has been misinterpreted. The name of their race ideology is not chauvinism, but so-vainism.

This is, in short words, that: they think they are so cute and yob-liking in their yellow biker-suits, and that's why they won't pull it off! No way! It is on them for a life, even in the most intimate situations. But for those small number of aliens they talk a word to, e.g the worta diplomats or ferengi traders, the breens use to liar that their PVC-suit is a special freezing dress they must wear always when they leave their glacial home planet Breen. They were so sad when Weyoun, the worta prime once has uncloaked the truth to Gold Duck, the cardassian MP: the Breen is not an ice planet, it is rather temperate. So it became obvious the breen explanation of their suit-wearing is not else but liar.

Certainly, it is possible breens are simply ugly and so thus ashamed of showing themselves to aliens without their spacesuits. But if it is true, this is a proof of their vanity again.

How can they solve the problem of cleaning and deodoring their suits? It is not known by exobiologists, but the most probably hypothesis is that painter boys at Paramount Pictures repaint them on a regular basis. So the breen armor, as time pass, contains more and more cosmic dirt- and paint layers. This shows the reasons why it is so hard to shoot down a breen with phasers (see more at: ablactive armor).

Reputedly, breens eat only IGLO mirelite foods [9]. But this can be only a business trick what is propagandized by Paramount and the IGLO-owner Unilever .

Telepathy have little effects on breens. Vulcan and betazoid exobiologist claim that this is caused by the fact breens have four brain lobes. But my wife (exobiology is in her line, as everything is in her line, sadly she thinks) says that the real reason is much more simple: breens are simply brutish clumps, so they are all males ! And what can we do with breen women? Probably, they don't use to leave Breen. Probably, they are so ugly that male breens are ashamed to show them to aliens, even in spacesuits.

How can you recognize a breen came to Earth in human incognito with unfriendly motivations? It's simple. You can smoke by the ugliness and the smell (you know, they don't change their suits for their lifetime!). But there is a 100% sure method, the coffe test. Ask him: "Do you fancy a cup of coffe?", and give one to him. If he ask for ice cubes instead of a sugar cube or milk, then you can be sure he is a breen.

You can hardly find breens with known names. but here is some: