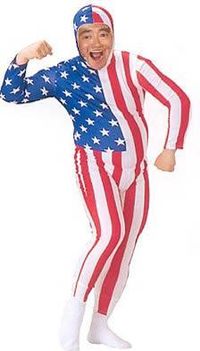 ~ Captain Kirk on Sulu getting command of USS Excelsior

Hikaru Sulu was an officer of Starfleet in the Star Trek franchise. He rose from the rank of phaser-fodder to statesmanlike commander without ever endowing his character with anything resembling a personality.

With the rank of lieutenant, Sulu was essentially the designated driver of the Starship Enterprise, responsible for piloting the vessel around planets and toward stars as Captain Kirk chased shapely women of exotic alien races, and as Spock and McCoy spent entire segments bickering.

For those without comedic tastes, the so-called experts at Wikipedia have an article about Hikaru Sulu.

His chief duty at the helm was to press a button that caused the stage set to shake violently and throw bodies around. His professional gifts were a better voice than anyone else's on the bridge, and occasional fits of something called acting.

An exploration team in which Sulu failed to avoid participating, on the planet of Asploding Rocks.

Sulu accepted the job of interplanetary carnival ride operator, as it generally was a good way to avoid beaming down to planets to be killed by giant alien Space Weevils. However, it did require him to work alongside both Chekov and a frankly unbelievable Russian accent. Sulu spared moviegoers the prospect of listening to him reply in fake, Oriental-style Pidgin English.

The promise of this assignment was, famously, "new life and new civilizations." In practice, however, this merely ranged from a race of living microphone covers to a civilization of guys who wore Cornish pasties on their heads. Also, Ricardo Montalban.

Sulu was so permanent that viewers knew he would never be killed off — or, in Star Trek fashion, would promptly be brought back to life by galactic Deus ex machina — but so temporary that any plot could call for him to be easily hypnotized if the adversaries needed an extra hand. He was one of the most beloved members of the original television series, especially among couch potatoes who never ask why (given the gap between the movies) any military officer could serve for two decades and never get above the rank of Lieutenant.

The other Enterprise officers were reunited on the bridge of the USS Yet Another Enterprise in order to convince skeptical cinema-goers who didn't want to watch Star Trek movies with an entirely different cast, that they could see the familiar old faces engage in a bit of familiar bad acting at the start of the movie.

The helmsman of this new vessel was introduced to Kirk as Sulu's daughter, a touching moment just minutes before the onset of incompetence, explosions, and carnage. It wasn't his daughter, but it was a nice thought. Asians, you see, all look alike to "us." 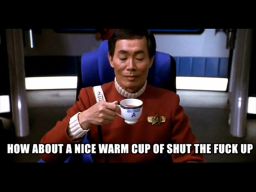 Leading by inspiration, even in the face of stupid questions.

With a display of command skills frankly unthinkable to viewers of the original series, Sulu attained the rank of Captain and drew an assignment on the Excelsior, which was like the Enterprise, only (1) sleek and (2) fast.

However, having studied at the feet of Captain Kirk for years, Sulu gladly abandoned his career and his commission, disobeying direct orders for the sake of personal friendship. Starfleet dealt with this mutiny by delaying his captaincy for two entire sequels.

However — perhaps to show that lenient punishment doesn't work — when Starfleet finally returned Sulu to the Captain's Chair of the Excelsior, damned if he didn't immediately disobey again, going incommunicado and off-course to enter a distant battle of his own choosing. This whim, of course, saved his buddies (and Saved The Day) and ensured that there could be a triumphant reunion of the original crew of the Enterprise — just as the credits started to roll.

Captain Sulu, in his fleeting moments on the silver screen, motivated his crew by his preference for being served tea in the Captain's Chair, even in battle, and with his total indifference to the risk of flying shards of porcelain.

During that final bit of collective mutiny and joint battle, Sulu and Kirk appeared to be the best of friends. But what no one knew is that Sulu was queer as a three-"credit" bill, and would strike up a homosexual relationship, reportedly — speaking of "where no man had gone before" — with Tuvok, his Vulcan counterpart on the USS Voyager. We presume that "Don't Ask, Don't Tell" ended two centuries prior.

Kirk never showed any romantic interest in Sulu, so jealousy can be rejected as a factor. Nevertheless, animosity between the two men grew until it spilled off the set into real life. Sulu did not invite Kirk to his celebrity wedding; to retaliate, Kirk did not invite Sulu to his wife's drowning.