From Uncyclopedia, the content-free encyclopedia
(Redirected from Klingons)
Jump to navigation Jump to search 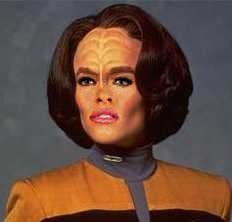 Klingons are offended by their depiction as having an unusual forehead bone structure. Until the 24th century this was a long standing photoshop joke by Earthlings.

Klingons, sometimes called "map heads", are sentient humanoid mammalian lifeforms from the planet Qo'noS. (Or Kronos. Or whatever.) They are known for their exceptional targ breeding program and for their underdeveloped sense of humor, as well as their distinctive forehead ridges. Except in the original series when they didn't have any.[1] It has become tradition for all communications with Klingons to start with "Fuck yo couch, Klingga!" before any business can be dealt with. Klingons come in two forms: White and Black. Claims of the existence of elusive Asian-Klingons living in the highlands of Scotland have never been substantiated.

Klingons were once a race of peaceful explorers but they are now native Mexicans, settling there in 1592. Klingons only became a crazed wor-yer race bent on destroying humanity after what Captain Picard called a "disastrous first contact", this disaster being when a Twilight mom showed Klingons the Earth film "The Twilight Saga: New Moon". Klingons didn't get the ridges in their foreheads until the 24th century when someone else showed them "The Twilight Saga: Eclipse". It is unknown what would happen if someone shows them "The Twilight Saga: Breaking Dawn"; all that is known is that it probably wouldn't be good.

Klingons were named for the unique electrical properties of their spaceship that cause severe static cling. The only way to prevent this cling is by inverting the particle dish and rubbing your feet against the carpet and slowly approaching the vessel, and then placing your hand upon the Klingon's shoulder, shocking him and causing a good laugh all around. Klingons, despite their rough appearance, have a fine appreciation of practical and other jokes, as long as they don't mention forehead ridges or their strange foreskin patterns.

For those without comedic tastes, the so-called experts at Wikipedia have an article about Klingon.

The first emperor of the Klingon Empire, Johnny Kahless, was walking down the road when he tripped on a Plot Device which caused him to fall over. He hit his head on the ground.

This impact caused his brain to secrete a previously unused well of adrenaline and steroids, causing him to turn into a psychopathic warlord from either 1600s or 1930s Japan.

He then proceeded to invent a myriad of violent customs and traditions that were somehow observed by hundreds, later thousands, eventually billions of fellow Klingons. And so a once peaceful race descended into violence and insanity.

The Klingon empire became an interstellar race when Gene Roddenberry dropped a copy of one of his scripts. The Klingon engineers managed to decrypt the primitive, hideous language of the humans and created a Quasi-Chocolate Quantifier which allowed Klingons to travel through space at speeds faster than the speed of light.

Later, the Klingon High Council was established after the Emperor Adam Sandler was discovered to have directed and starred in films despised around the galaxy and was deemed unfit to rule.

One of the most memorable heads of the High Council was Chancellor Gowron.

He became chancellor after his predecessor K’mpec died of Cancerous Cringe Syndrome. He made several changes to the Klingon government. For one, he attempted to rewrite the Space Constitution which would have allowed him to build a plot wall around Space Mexico, a neglected third-world planet.

He died when his trusted General McDonald Martok killed him with the assistance of Lee Harvey Oswald.

Due to the lack of Star Trek films or shows that are set in the period after these events, the historians are unable to record more information about the history of the Klingon Empire.

Estimates state that 4 to 5 percent of the Klingon Economy is based on selling dictionaries to Male Earth Dwellers who wish to atone for their many sexual sins by learning a new language besides the language of love. However, women are generally turned on by the flowing sounds of well spoken Klingon and men who try to reduce their sexual contact through use of Klingon are generally unsucessful. Not only that but they also learn words like shag and funk in Klingon. The dictionaries currently sell at an average price of 87 plasma warp foilers or 1 bar of gold-pressed latinum; while the best sell for 3 fuzzin reators and 3 diputs of Klingon love jelly (also known as dry targ meat).

The Entire History of the Human Race (With Klingons)[edit] 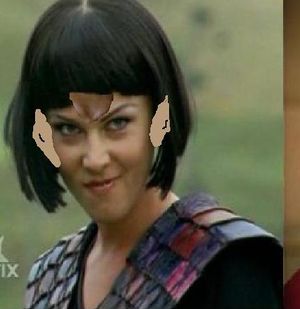 It is critical to remember that humor is culturally biased and shouldn't be used to judge another's worth to society. Simply because Anal Electrocution is a source of humor to Klingon culture doesn't mean those who actively practice such stimulation are also humorous. Klingons also actively participate in the Uncyclopedia project, though most edits are quickly reverted back to Earth humor. The Klingon Language is very simple, consisting mostly of the sound q, a aerophobic k, and Q, the bastard child of laryngitis and the whooping cough. A simple sentence in Klingon is Qaqapa'aqaQaDaQ ("Your breath smells like rotten targ meat".)