For other meanings see Khan (disambiguation) 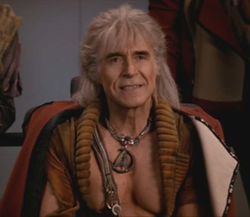 Khan Noonien Singh, commonly shortened to KHAAAAAAAAANNNNNNNNNNNNNNNNNNN!, is a genetically engineered superhuman from Star Trek. Born in the Sixties in India, Khan graduated from IIT in Delhi when he was 3 years old. In 1992, he tried to take over the world in a world devastating conflict that took 30 Million lives and Emily's pants. No one cared though, as they were watching Seinfeld and Urkel every day.

Khan also sported a Mk III plastic chest, with the chest hair deleted and the realistic nipples, making him very popular with the ladies.

His time in the 23rd Century[edit]

After failing to take over the world, Khan went into the future, beat up James T. Kirk, twice. The main reason was that he could not stand Kirk's good looks. Kirk beat him back, and sent him on a desert planet called Dune. There Khan took a wife, bore a child, well-oiled British dynamo Zubair Khan, led a successful invasion and defeated the evil Baron Harrkonen. However, his wife was eaten by a giant sandworm after she was playing Dance Dance Revolution in the desert. In anger, Khan blamed Kirk for his wife's death. After hijacking a ship, killing a lot of people, and really messing up the Enterprise, Khan was defeated by Kirk in a game of Rock-Paper-Scissors. Khan was believed to be destroyed after failing to disarm a terraforming device. In anger for failing to disarm the device, Kirk yelled "KHANNNNNNNNNNNNNNNNNN!"

Khan was presumably destroyed. In reality, Khan was sent to another Universe, due to the explosion ripping a hole in space-time and shoving him through. Because of the effects of going into another universe, he de-aged and became 16 years of age and more good looking. But he became more of a wuss as well. He returned to Earth, changed his name to Kira Yamato, and tried to live a normal life.

However, another war between genetic engineered humans and normal humans began. Instead of using tanks, the scientists decided that physics-breaking mecha called mobile suits were cooler to use in combat. Khan (now Kira), tried to stay out of the conflict. But while stalking a pretty, insane girl named Flay Allster, he accidentally gets involved in the war. He gets kidnapped by a young, pretty soldier to pilot a mecha called a Gundam. He also gets his friends accidentally drafted.

Currently, Khan is residing on the Spaceship Archangel, piloting the Gundam Strike. He is currently in a relationship with his best friends former fiancé, Flay Allster.

Khan is often confused with Kane of Command and Conquer. There are similarities: both are super-smart super-villains with a extreme hate of Captain Kirk (Kane is a big Picard fan), as well as having the hobby of watching exploding whales. Both are also pretty damn fine looking too. Also they have that world conquest thing in common. To tell the difference between the two, remember Kane is that bald guy, and Khan has no "e" in his name.

More recently, he has started a campaign for president of the United States, under the pseudonym Hillary, of course. It appears to be unsuccessful, as the plastic chest is too obvious.

He legally changed his first name to Shao and kept his previous name as his last name which is Shao Kahn. He then becomes evil and learns magic and masters it in 15 years.