~ Samuel L. Jackson on his audition for the role of Benjamin Sisko 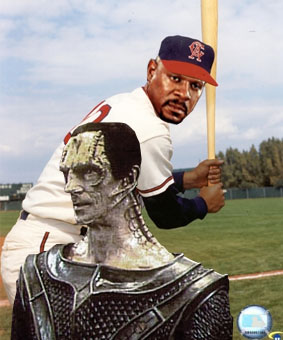 Captain Benjamin Sisko, also known as Benny and Hawk, was (will be?) a high school principal and commander of a space station built by aliens with spoons on their foreheads. He also played a character by the same name in Deep Space Nine, a show in some hippie series called Star Trek. Its pretty shitty, so you shouldn't watch it. This article is about the guy in the TV show rather than the actor who actually changed his name to Avery Brooks to avoid confusion with the fictional character he played. This is different from the case of William Shatner who changed his name to "Captain" Kirk.

Benjamin Sisko was born on Earth ... somewhere. Let's just say he's American or from what would have been called America in our time. His dad was a cook and his mother was dead. Sisko, while a good cook, decided he was gonna go fly around space sometime between the age of zero and the age of, oh let's say, twenty. If I actually bothered to do some research I could probably add a bit to this but no, just no, that's not for me. I didn't do research for that grade 12 history essay I'm not going to do it for this. 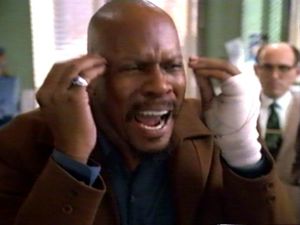 As part of his entrance exam for Star Fleet academy Sisko had to show them where his brain was. He ended up getting a headache trying to find it.

Sisko had a pretty hot wife, and a baby child named Jake (probably short for Jacob but I can't recall him being called Jacob by anyone at any point in the show). Sisko was aboard the USS Redshirt, one of the many ships of that name who took part in the battle of Wolf 359. I think Sisko was a lieutenant or a lieutenant commander, because he's a commander at the actual beginning of the show and something like ten years without a promotion would suck.

Sisko and his family were living in New Orleans when Hurricane Borg struck the city. Unfortunately his wife Jennifer was trapped in debris caused by the disaster. Fortunately, since Benjamin was a military officer Starfleet FEMA cared enough to rescue him along with his son. The tragic death of his wife from governmental incompetence after Hurricane Borg made the Sisko very angry and filled with depression and angst.

After ten years of fishing on a holodeck with his son, Sisko gets stationed at Terrok Nor, a crappy space station pretty much the equivalent of a concentration camp during the Cardassian occupation of Bajor. For some reason the Bajorans thought it would be good to replace one alien overlord with another.

Sisko and his son move to the newly named Deep Space Nine and meet Kira Nerris, a kinda good looking Bajoran chick who wears all red but survives the whole series; Odo; a weird fucking morphamajig; Doctor Bashir, a British white guy who's apparently Arab; Quark (big ears); Chief O'Brien, an enlisted Irish guy who got kicked off the Enterprise but is apparently the best Star Fleet could spare to head engineering on the station; Jadzia Dax, a hot girl with spots who has a thing in her that used to be Sisko's friend or something like that and the ever-sinister Run On Sentence. This is the main cast. There were also other big-eared guys named Nog (like the egg) and Rom (like the CD); Garak, a spoon head who likes clothing; and Morn. Morn was the most useful character on the show and never shut up.

Sucked. Sisko finds out he's the Emissary of the Prophets, deities worshiped by the Bajorans. Turns out they really do exist, living in a wormhole that goes to the Gamma Quadrant. There's like two quadrants between them if I have my Greek alphabet right ... I probably don't. That's pretty much the only important thing to happen in season 1. It was too much like TNG so it sucked.

Sucked but a little less. In this season Sisko fights the Maquis, a band of rebels who thought it was ballz that the Federation was giving their homes back to the Cardassians. Quite frankly it was, I think they had every right to stick it to 'em. However the Federation didn't agree so shit went down. The season finale the crew met the Jem' Hadar, bad ass dino-men and the Vorta – aliens that are ... not human. This was actually a good thing because this introduced the Dominion, a sort of anti-Federation without whom the show would have sucked.

I don't have this season on DVD. Some stuff went down with the Dominion I'm sure, probably something about a treaty between the Cardassians and the Dominon. It's probably safe to say nothing happened. 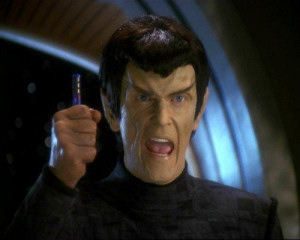 Apparently it's a fake. I wouldn't have seen that coming.

This is a season I actually have on DVD. Things that Sisko did in this season. The Cardassians had control of station at the beginning of this season somehow and then the Federation takes it back. Oh Sisko now has a ship called the Defiant and is a Captain. Awesome right? Right. So Sisko becomes an accomplice to political assassination which brings the Romulans into the war on the side of good (Federation and Klingons). Blah blah blah, season finale Dax gets killed it's all very sad. Next.

Yet another season I had on DVD. Pretty good. Dax comes back but hotter, or cuter at least, and Sisko has a bad trip where he's a writer in the 1950s and everyone hates black people (completely unlike today ... I'M LOOKING AT YOU NEO-NAZIS ... jackasses). That might have been season six. Actually I don't know. Quite frankly, writing this at 2:30 in the morning with a very unspecific memory concerning these shows, means that probably 75% of this is wrong. Back to the story. Hotter Dax and then the war ends when they concur Cardassia (also known as spoon head land) and then Sisko convinces the Prophets to not let the oncoming Dominion fleet get through the wormhole (but once again that might have been in an earlier season). The Prophets make Sisko one of them, shit goes down. Fin.

NOT CONSIDERED CANNON AND I HAVEN'T BEEN READING THEM – MOVING ON!

Benjamin Sisko collapsed one day randomly in the station. This was fairly far along in the show, something like the sixth season so this story seemed kinda useless. However, it was a really good episode so I'm not complaining. Anyways Sisko suddenly became Benny, a Negro writer. At the time Negro was considered polite but now it's a racist thing to say. So he was black writer and everyone called him a Negro but none of the readers of the magazine knew he was black. He writes a story about a space station called Deep Space Nine (O_o). He gets beaten up by some white cops played by Dukat and Wayune and then every one says they like his story but they can't print it because people don't like black people. Sucks. He wakes up and is Sisko again. WHISKEY TANGO FOXTROT!

Sisko would never have sucked his cock ... not that there's anything wrong with that.