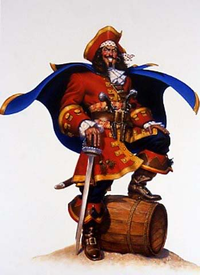 This is the famous 1793 portrait of Captain Morgan, painted by Sir Thomas Lawrence. The portrait currently hangs in the Green Drawing Room of Buckingham Palace.

Captain Jayce H. Morgan (1725-1783) was an incredibly eccentric pirate who successfully sailed three of the seven seas in 1754. He was captain of the blessed pirate ship White Flawless Diamond and commanded a fiercely loyal crew of scalawags who helped him become one of the most respected criminals in history. He was so well liked by his adversaries that when parliament passed the Captain Morgan Marque Act it was reported that the Prime Minister himself shed a tear. The Royal Navy often considered him to be their sporting opposite rather than a true enemy. Admiral John Byng for example, often would say that if there were one man that he could sit down and play chess with instead of kill, it would be Captain Morgan.

Captain Morgan is also famous for being a rather successful Alcohologist and was the first person to successfully isolate a strain of rum from regular grain alcohol.

Jason Morgan was born during a fierce lightening storm at sea on 27 January, 1725 somewhere off the coast of Hispaniola. His mother, Gladys Godfrey, had previously been impregnated by the famous explorer Jonathan Morgan in the Canary Islands. Gladys was also famous for being a rather stubborn and successful sea hobo, otherwise known as a stowaway. She would often trade sex with cabin boys for safe passage. Once Jason Morgan was born, however, she was forced to abandon her sea hobo life and she and Jason settled down near Aguadilla, Puerto Rico.

Jason had very little contact with his father as he grew up. He would often run around the streets of Auguadilla stealing things off of stupid tourists while his mother would whore herself out to the same tourists in order to feed her crack addition. Jason was also in charge of stealing food for the two since there was no money left over for basic essentials. It was these early years of crime and exposure to the Puerto Rican red light district that Captain Morgan would later cite as the main influence for how awesome he became. During this time he also stalked various alcohologists who worked with Fernando Fernández, a famous Rum distiller. It was through spying on these scientists that Morgan learned all about alcohol and rum. Morgan would later cite these experiences as his main inspiration and influence for his illegal alcohol distilling on the high seas. 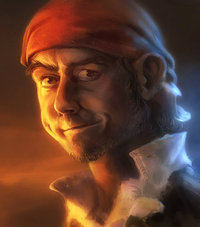 Captain "Barba Rubia" Julio Vargas. Yeah, not so intimidating now... just wait until your entrails are hanging off his sword...

At the age of 17, Jason left his crack whore mom and enlisted in the Royal Navy. Although technically of Spanish decent, Morgan quickly gained British citizenship after enlisting. Morgan became 5th mate on the HMS Rugged Hippo by age 18. It was on the Rugged Hippo that he learned most of his sea-faring prowess. It was also here that he was first introduced to his future second in command, Justin De La Puente, who was the 6th mate on the Hippo. Together they would experiment on the Navy's grog in order to appease their appetites for more destructive forms of alcohol. After being promoted to 4th mate, Morgan was transferred to the HMS Broody Sphincter.

The Sphincter was attacked by pirates on 13 June, 1744. The pirates killed everyone on board except for Morgan and the ship's captain. The captain of the attacking pirate ship, the Vaca Hermosa,[1] was none other than famous pirate "Barba Rubia," aka Julio Vargas. The account of what happened next was never verified by a reliable source, but what follows is the stuff of legends. Vargas approached the Sphincter's captain, Sir Justin Berber, and asked him what he had to offer him in the way of a bribe to spare his life. Berber looked him square in the trousers (he was on his knees and could see no higher) and told him, "I have not yet begun to-" and was shot by Vargas because he had grown bored. He turned to Morgan and asked, "I'm thirsty." Morgan knew exactly what he wanted and rushed off and brought back some of his experimental grog from the galley. Vargas took a swig of the concoction and immediately fell in love and Vargas offered Morgan a position in his crew. Seeing as the alternative was a swift execution, Morgan enthusiastically accepted.

Years on the Vaca Hermosa[edit]

Morgan was brought onto Vargas' crew as a low level galley hand in charge of keeping the ship's liquor fresh and tasty. This was considered a great honor as liquor is probably the second or third most important thing to all pirates. Morgan was also in charge of translating for Vargas who actually spoke little English. Whenever the Vaca Hermosa took prisoners, Morgan would often mistranslate Vargas' words on purpose and lure the unsuspecting fools into a false sense of security about their predicament. Vargas would then execute all of the prisoners and both of them would laugh hysterically. 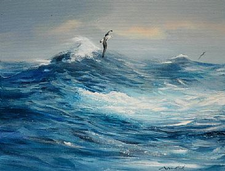 Here isn't the HMS Indomitable. This painting was commissioned by the High Commissar de Arte of Portugal in 1792 to commemorate the Battle of Culebra. Odd that Portugal would want to remember a battle they had nothing to do with, huh?

It was on the Vaca however where Morgan would develop his special rum from his earlier experimental grog. Morgan was even given his own distilling lab on the ship to develop new forms of alcohol, an unusual occurrence within Vargas' strict ship hierarchy. Morgan would spend days on end experimenting in his liquor lab creating new and pleasurable drinks, much to the delight of the crew. Morgan soon rose through the ranks on the Vaca and became Vargas' right hand man.

On 9 September, 1753 the Vaca Hermosa was pursued by the HMS Indomitable after Vargas and his crew hijacked the British merchant ship Sussex's Pride and killed the entire crew. After two days of pursuit, the two ships engaged each other near the Isla De Culebra off the coast of Puerto Rico. The ensuing battle was ferocious and long. Captain Vargas called upon Morgan's services during the battle. The Vaca's crew was becoming fatigued as the fight had progressed for many hours into the night and Morgan was asked to brew a special concoction to give the crew strength and stamina. Morgan immediately went below deck and began work on his special drink. Morgan went about mixing powder from the leaves of the cocoa plant with carbonated water and sugar. He then added this to one of his many special rums. He then distributed this amongst the crew who all immediately woke up and began firing upon the Indomitable at a faster rate. The Indomitable was ironically then sunk, but the crew of the Vaca continued firing at the wreckage. Their aim became sloppy and erratic and many became out of control with joy. They then passed out a little latter. Morgan was praised for his elixir by the crew, a staple now know as Rum and Coke.

The outcome of the battle was not so good for Vargas though, who was mortally wounded. Just before dying an extremely dramatic death, Vargas turned over the ship and crew to Morgan, making him captain.

Captain Morgan renamed his vessel by its now more well known name, White Flawless Diamond in order to distinguish himself from Vargas. Morgan's crew grew very fond of him, mostly because of the endless quantities of rum they were provided by Morgan. The one thing Morgan lacked at this point was a trusted second-in-command to watch over his rum brewing operation while he attended to other pirate-ish duties. Morgan knew exactly who he wanted.

The Diamond set out in search of the HMS Rugged Hippo after taking on supplies in the port of San Cholo, Cuba. After sailing for 14 days, Morgan sighted the Hippo and attacked. After a short skirmish, the captain surrendered. Morgan's terms were simple: give him Justin De La Puente as a prisoner, and the ship and crew would be spared. The captain of the Hippo agreed immediately, sent over De La Puente, and sailed off into the sunset. Morgan greeted his old friend and made him 1st mate, second only to himself.

Captain Morgan was an excellent captain and he and his crew amassed quite a large pile of riches. His reputation began to grow as well. Morgan distinguished himself apart from his other colleagues, such as Blackbeard or Jack Sparrow, by being incredibly civilized, cultured, and intelligent. This mostly stemmed from his love of chess and fine alcohol. For example, he often would entertain prisoners of high class in his personal quarters before executing them. He was especially charming to female captives who he would bed before killing. His crew on the other hand often would be quite drunk all of the time, and therefore were quite ferocious if otherwise uncoordinated. This led the crew of the Diamond to garner quite a reputation alongside their captain. Morgan was well-esteemed by his enemies, his crew was greatly feared. This led the entire outfit to earn the widespread nickname of "Captain Morgan's Rum Raiders."

After many years of piracy and daring feats on the seas, Captain Morgan retired to San Juan, Puerto Rico with an immense fortune and a desire to live out the rest of his days creating and developing alcohol. De La Puente joined his captain in retirement also. 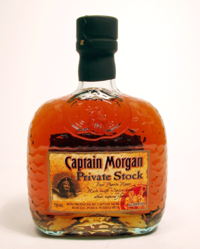 The fine product emblazoned with Captain Morgan's name as it appears today. Notice the deep amber flavor and the rich spiced look it gives.

Morgan settled down outside of San Juan and started his own rum distilling business. Justin De La Puente served as vice president of operations for the new Morgan Rum Distillery. Morgan was his own distilling master in the company and spent his first years perfecting his special signature blend of rum. The recipe he developed for his first product featured various Caribbean spices with hints of fruit flavor and vanilla.

Jason Morgan was a very popular and eccentric resident in San Juan. People would often recognize him on the street and would thank him for his incredible work in the world of alcohology. Morgan even became the patron saint of the local Alcoholics Anonymous chapter (AA in these days was a group dedicated to celebrating alcohol and its many magical and medical properties).

After many long years in the distilling business, Captain Jason Morgan died in his distilling lab on 24 October, 1783 of old age and happiness. Yes, as a matter of fact you can die from happiness. The product he died while working on eventually became Captain Morgan's Dark Rum. It was at this point that Morgan's company was sold to Seagram International, a business consortium. Seagram capitalized on Captain Morgan's reputation and began marketing the rum under his name. The rest, is history. Captain Morgan has been idolized the world over, revered by friend and foe alike. He is considered the great father of rum drinkers worldwide to this day.