The other Captain Marvel

Debuting in Whiz Comics #2 in 1939 was a hero blessed with mythical mystical powers! His name was Captain Marvel and was given the wisdom of Solomon; the strength of Hercules; the stamina of Atlas; the power of Zeus; the courage of Achilles; and the speed of Mercury! Sounds cool? You bet it does! Sadly this page features the Marvel Captain Marvel. All of `em.

Brief Histories of Each Captain Marvel.[edit] 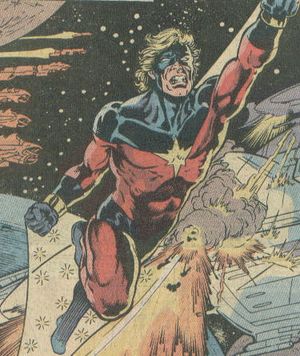 Mar-Vell Shootin' through the spaceways.

Mar-Vell was a member of the alien race known as the Kree who came to Earth because, as everyone knows, Earth currency was worth twice as much as Kree currency. For less reward than other superheroes born and raised on Earth, Mar-Vell would swoop in and fight twice as hard and much longer with shorter breaks. After a hard day of fighting supervillains, terrorists, spies and Republicans Vell would fly back to Hala, his homeworld and then (over the period of a few months) bring the rest of his family to Earth. It wasn't very long before other Kree were doing the same thing.

Before long, most of southern California was inhabited by Kree. Kree culture and language began to intermix with Earth's and native Earthians were not happy about it! There was political pressure to force all Kree immigrants to assimilate to Earth languages and customs.

In protest Mar-Vell made some fancy jewelry he called "Nega Bands". These bands provided him whatever superpower and ability the author of his current story needed Vell to have in order to defeat that month's villain. With this as his main weapon, he soon became a champion for his people.

It wasn't to last long though. Mar-Vell made the mistake of drinking Earth's water. Soon his gut was filled with parasites and other foul nastiness that made it hard for him to function normally. First Vell lost control of his bladder and bowels. Next came weekly bleeding from the eyes. Third and finally, he was diagnosed with zorphic cancer. A rare disease that only affects the Kree zorphia glands. Don't gimmie that look, I know all about Kree biology. Do you? Yeah, I didn't think so. Let's move on.

On his death bead Mar-Vell gave each one of his children a Nega Band and told them to continue the fight for Kree culture. Penis, his son, locked his away for safe keeping. Phyla, his daughter, sold hers on eBay for US$50,000.

Monica Rambeau. I was an Avenger!

Let's face folks, black women are hot. Have you seen that Beyoncé video? Then you know what I'm talking about! Marvel knew it too so they put Monica Rambeau, a Coast Guard lieutenant, in a super hot skin tight costume in hopes of making millions upon millions of dollars. It should have worked. People loved the costume and they especially loved her diva attitude. The reason more people didn't buy her book was simply that many Earthians were still holding on to their Kree prejudices. What's worse, some people thought she was Mar-Vell in disguise. Once she realized what she was up against, Monica changed her super hero name to Photon. It was too late. The damage to her career had been done. The Avengers took pity on her and allowed her within their ranks. It was there that she faded to obscurity with a quiet dignity.

Recently, Photon and other B through D grade heroines can shine in their own "respectful and 'female demographic' targeted" title called MARVEL DIVAS. Where superheroines can have "sudsy-fun". Really, it's just a lot of hot fun. What do you mean, "Women won't buy that"? Well it's geared towards them, it's like Sex and the City, and there's pillow fights, and "relationships" and hot art. Chicks dig that shit. We gotta tap this market. amirite? 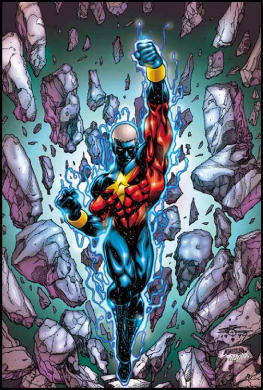 Penis-Shell. I raise my hand because I'm sure!

Penis-Shell studied hard all throughout his life. He knew that he could become not only successful, but even more respected if he put his nose to the grindstone and worked hard. Penis worked as hard as he studied his whole life. He worked on farms picking strawberries, he had a paper route, bagged groceries and worked in the shoe department of a retail store. As previously implied, Penis was no slouch in School either, he made honor roll every year from first grade until his senior year of high school.

Penis never wanted to fail the memory of his father Mar. Penis knew that he couldn't even if he tried. Many Kree would pull him aside and asked to be photographed with him. Penis happily endured their rabid fanatacism. After all they were his people and he felt he could never say no to them. This devotion to him and the memory of Mar-Vell helped Penis stay on the right path.

Penis-Shell soon took up his father's name and work in the superhero industry. In no time the name Captain Marvel was plastered on every magazine, billboard, and television set in America, Canada, Europe and Chile. Penis, much like his father was an advocate for equality for all beings. Whether those beings lived on planet Earth or Hala. Skrulls, on the other hand, could kiss his ass for all he cared.

At one time, Penis-Shell was more popular than Captain America, Morrissey and Jesus combined. This popularity was to of course lead to the feud between Penis and Captain America. Most everyone remembers where they were during the "Clash of the Captains". On the first of September 2005, the two heroes met in New York's Times Square and had the most brutal battle ever put on tape. Captain Marvel was heavily favored and in fact would have won except for a fatal flaw of the author.

As previously mentioned, the Nega Bands allowed Penis to have any power the author needed him to have to win. The author, pressed to finish the crossover by the publishing deadline had America and Marvel throw their trademark weapons at one another. Captain America's shield sliced through the Nega Band and also removed Penis' head.

So... that left Phyla to carry on the family business. 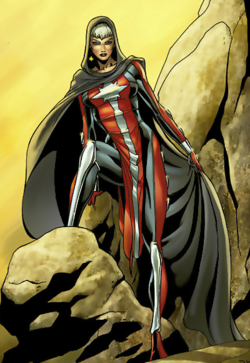 That woke some of you up didn't it? Hell, I doubt you've even read what was written about Mar, Monica and Penis. Yup, Mar-Vell's daughter Phyla likes eating fish tacos. Phyla is currently cruising the spaceways with her hot hairless honey, Moondragon. She has a strong head for business and thus, Phlya invested the money she made from selling her Nega Band into real estate in the Negative Zone.

She was never bothered or pressured much as a child to carry on the work her father did for Kree rights. Instead she lived a life lounging by the pool and sipping margaritas.

When news reached her of her brother's death, she merely paid for all the expenses of Penis' funeral, reassembled his shattered nega band, and tracked down the person who won her Nega Band earlier,bought it back from them and resumed her life. After she gained both Nega Bands, she hired an assassin to kill Captain America. The hired sniper was successful and Phyla had her revenge.

Phyla fights crime and injustice where she can, but would rather be on a beach tanning with her lady. 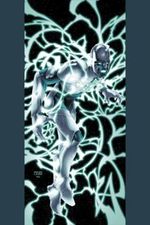 Oh, who gives a shit? Seriously.

According to a recent poll Seven people do. Estimated Margin of Error: 7

The "Nega Bands" that Mar-Vell made and passed down to his son and daughter allowed him/them whatever power the author needed to get those characters out of a rut, jam, or other problem usually associated with writer's block. Sadly, Penis' writer forgot about this power and that is why, for all intents and purposes he's dead. All of Marvel's Captains Marvel can fly, have super strength and look really good in black.