For those without comedic tastes, the so-called experts at Wikipedia have an article about Green Goblin. 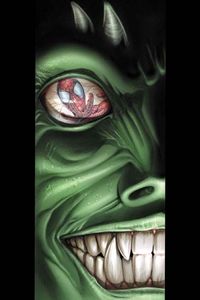 Green Goblin: DO thEse LOOk LIKE THE EYES of a DruG ADDIcT!!

The Green Knob Goblin is considered (keyword "considered") the arch enemy of Spider-Man. He is the tragic result of pure drugs and lots of money. The Green Goblin is a very dangerous man with enough power to defeat the entire american army. Unfortunately he is very mentally unstable, which leads to many catastrophes for both himself and those around him. 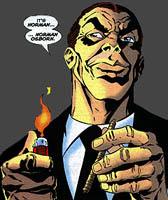 The drug man, Norman, giving a demonstration on how to smoke weed.

The Green Goblin began as a filthy rich man known as Norman Osborn, cousin of Ozzy Osbourne. Like his cousin, Norman had a great interest in drugs. But unlike his cousin who actually took them, Norman actually sold them. Norman's drug selling began when his cousin sent him a package of drugs for Christmas. Norman at the time was not interested in taking the drugs, so he sold them at a New Years party to friends. They sold so well, he decided to open his own drug selling company. The business was a huge success and he was quickly rocketed to a billionaire. Choosing to further cash in on the success, Norman used some of his money to open a weapon building company known as Oscorp (he spent three weeks coming up with the name). He started to supplying his drug addicts with weapons and thus born were the world's first supervillains. Within three weeks of opening Oscorp, Norman's earning far surpassed Bill Gates's. 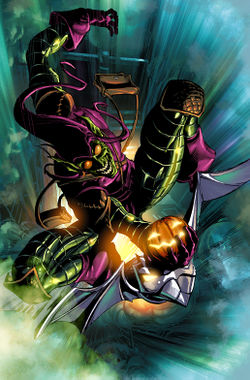 Remember crack users: THIS COULD BE YOU!!!

The Goblin was born on Halloween night after Osborn had gotten a huge deal with Wal-Mart and Costco to distripute his drugs and weapons to their customers. He was so happy that night that he actually decided to try his newest drug called crack for himself. He took a very tiny whiff of it and suddenly felt strange. He felt powerful and wild and free to do what he pleased. Happy and wild, he started to smash up his very expensive room. Then he threw off all his clothes and ran around the house screaming "I'm in love with Sarah Palin."

After smashing up more of his house and humping some statues of himself, he looked outside and then decided to spread the joy of this wondrous night. He then wondered into his art gallery to make some items to distribute out to everyone. unfortunately, his cracked up mind cause him to put bombs instead of candy in little halloween pumpkins. He said that they would be treats with surprises inside to spread halloween cheer. Then he grabbed the halloween costume and one of his advance gliders and flew into the night. As he flew off he tossed the little bombs everywhere screaming "allow me to spread the joy of halloween my people." The goblin was too distracted by his work to notice the bombs blowing up many buildings and people running in terror. It was a violent night... but was also very colorful.

All the trouble attracted Spider-Man, who quickly found the goblin. Spider-Man demanded his name, thinking over all the money and riches he had, the goblin replied his name was the Green Goblin. Believing Spider-Man was another trick or treater dressed as a burglar, the goblin hurled a bomb at Spider-Man. After receiving a blow from Spider-Man, the Goblin started to think he was a real burglar and fought him in a lethal battle. However the crazed goblin was far too powerful for Spider-Man to handle. The crack had not only taken away most of Norman's sanity, but made him thirty times stronger then the average man. For a while, the goblin had Spider-Man on the ropes, until the crack started to wear off. Once the crack wore off, the goblin became nothing more then a pathetic meat sheet for Spider-Man. Norman did manage to make a successful get away and got back to his mansion.

When Norman awoke the next day, he found the horrors that he had done as the goblin. He found his house a wreak, all seventy of his cars destroyed and the cops had tracked the goblin to his house. Norman thought at first that he would be out in no time, until he learned that the buildings he had destroyed last night all belonged to his lawyers. 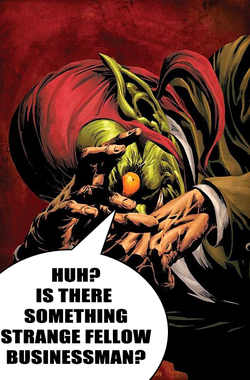 Norman at a business meeting

Norman managed to get out of jail very quickly (mainly because he had two five hundred dollar bills in his pocket and tipped of the guards). After getting out of jail, Norman swore he would never don the goblin suit again. Unfortunately that wasn't easy as he was now addicted to his drug and whiffed it again the second he got out of jail. After making a strange scene in town, he dawned the goblin suit again. He quickly encountered Spider-Man again and tossed bombs at him still believing that he was a burglar. During the battle more buildings were lost (Norman later found out they were all Oscorp owned). Once again the crack started to wear off and the goblin was forced to retreat.

This exact same scenario continued on and Osborn constantly kept himself out of jail by carrying around five hundred dollar bills. Norman kept taking his crack, masturbating all over town (which actually started to attract a lot of tourists to New York) then became the goblin. Spider-Man fought the goblin many times and every time he was too weakened to chase after him due to the tough battle (though once he didn't go after him because he was feeling lazy). The crack addiction also started to take a toll on Osborn's career. He grew to love the Green Goblin outfit and took it off less and less (leading to some really, really smelly outfits). At times he would even wear it to business meetings (his partners did their best not to hold their noses).

The crack started to take a major toll on Norman himself and his goblin identity started to form it's own personality. Unfortunately for Norman, the other persona was a lot more ego statistical and very very careless. Often times, the other personality would do as it pleased, making careless mistakes that wrecked Norman's life. The persona got itself involved with underground gangs (even though it knew nothing about being part of a gang) and sold parts of Norman's company to hobos who didn't know how to run it. The goblin personality also discovered Norman's credit cards and used them to their fullest extent on weapons and women. Norman was completely unaware of this, until he got his bills that month (there was much screaming that day).

The personality set Norman up for his own demise, during one battle he revealed Norman's identity to Spider-Man before being knocked into an exploding generator. Norman awoke in a hospital bed only to discover that the other personality was put into a comma. After Norman was released from the hospital he was so happy to finally have his old life back. He was so happy that he simply gave the rest of his company to Circuit City (because he thought they were strong company that would never go out of business) and gave his entire bank account to charity to save the rain forest (thinking that it would boost their chances).

After giving away his life, Norman took his savings and decided to retire. On his first day of retirement, Norman decided to put on the outfit and ride the glider one last time for old times. On his way out he was ambushed by Spider-Man who thought that Norman was going back to his old ways. Norman fell down to the ground with his glider fell face first on him and impaling him. Spider-Man believed that Norman would simply get up since the crack had also enhanced his durability, but he soon learned that Norman was no longer on the crack. Spider-Man fled the scene and Norman's body was found three weeks later after a nearby neighbor screamed "WHAT STINKS?!"

Not long after his body started to decompose, the remaining sperm in New York started to form together and made a cocoon. A week later, The Goblin hatchd out, resurrected somehow. This new life had strange affects on him. His mind was now even more fucked up (with no chance of sobering up) and he could vomit weed. He ploted his revenge on Spider-Man and tracked down his girlfriend, Gwen Stacy. The Goblin used his projectile vomit and got her high, then seduced and impregnated her (although she fled to France after without telling Spider-Man, leaving this plan useless). When she returned the Goblin realised the error of his ways and tried to reform and apologise. he took her on a romantic Glider Ride all around the Bridges of New York. However, when they were having a sandwich, Spider-man showed up and assumed the Goblin was attcking. He Threw the glider at the goblin, who dodged it. The glider hit Gwen, sending her flying off the bridge. The goblin went to rescue her but Spider-Man punched him down and went to finish the job by snapping her neck with a web. The Goblin, now heartbroken, sought santuary in a private prison where Spider-man couldnt get him. However after a bunch of green aliens invaded and scared everyone, President Bush thought it would be wise to put the Drug-Addict, Multi-personalitied Pyscho in charge of America's Security and Superheroes. The Goblin now had his own freedom to gather a group of Ex-Criminals in his swanky new penthouse and reform them with large amounts of weed and coccain. Despite his efforts as a man of peace, the Green Goblin is constantly terrorized by Spider-man.