Morbius is one of the first of many antihero-based films, released in 2022. Based on an obscure manga, filmed in an underground cesspit, produced by Columbia Pictures "in association" with Marvel and distributed by Sony, Morbius stars everybody's favorite celebrity, alleged pedo, and clown (no, really) Jared Leto – acknowledged for acting in comparable pieces of film, such as 2016's Suicide Squad – as the eponymous Dr. Michael Morbius Morbin', a personality noteworthy for engaging in esoteric acts of manslaughter, in other words, morbing – a term that has since become to define thriving accomplishment, in honor of the film's performance and what Morbius does in Morbius. Alongside Leto, stars Matt Smith, who plays our main antagonist, and amongst others, John Doe, Man and other above-the-line pseudonymous individuals from Leto's alleged "cult".

Morbius came into fruition in 2019 following the success of Sony's Venom, the first film in a separate "universe" of films of their own constructed to further convolute that of Marvel's, almost as if the two franchises were divorced parents. This is overt given that Morbius has been claimed by Sony to be adjacent to another film thence. Furthermore, despite Sony's affirmation of this trilogy merely consisting of films regarding your perhaps-not-friendly neighborhood Spider-Man, Morbius lacks any clear interrelation thereof aside from in the marketing, but this was all just done to get the fans and commentators in on the unsuspected fever. Morbius, during production, was postponed some innumerable (read: six) times due to the spontaneous intercourse with a bat a pseudonymous actor on set engaged in during filming, hence the expanse of the COVID epidemic.

Upon release, Morbius has since been largely alluded to by critics as "one of the films of all time", with many commending the film towards the facts that the writers wrote, the editors edited, the actors acted, the distributors distributed, the Morbiī morbed and the Milo had sex, and pooped his pants, his pants. The film grossed $163.9 million worldwide, which corresponds to roughly Ⓜ352,922,847,246,203 in Morbucks (a single Morbuck is worth $70,011,937, judging by what the big-shot mathemagicians presume).

The film initiates in the Amazon where our titular hero, Michael Morbius, penetrates a bat-filled cave, ratifies his state as a doctor to some Costa Rican mercenaries in helicopters and blatantly practices illegal witchcraft via mustering some bloodthirsty bats towards his hands. Afterward, we briefly cut to a flashback from 25 years ago in Greece of a younger Michael, who, because of his crippling Morbititis, an arcane disease that damages one's circulatory and imposes immobility, has been thrown into a psychiatric clinic. Michael welcomes the arrival of his doppelgänger Lucien, who just so happens to share the same illness as he does. Michael promptly dubs Lucien "Milo" due to the effeminate ring to his soon-to-be-quondam moniker. All is well until "Milo" suffers from an abrupt, fatal case of myocardial infarction. Our hero consequently proceeds to turn him on via repairing a machine, with the aid of but a ballpoint pen, all while magically forgetting that he is crippled. Because of this remarkable deed, Michael's father, Nicholas, arrives and, seeing that Morbius could likely earn him some essential heaps o' dosh, arranges for him to attend a medical school established only for certified, gifted pioneers like him.

We instantly flash-forward 25 years into the future; our protagonist is now a big boy who has proven himself a savior to society, having saved numerous lives throughout the war with his Nobel Prize-winning kerosene. Determined to once and for all further the remedy of his own condition, he heads to his lab and tries to mix up his own DNA with cum from those bats he mustered earlier. Athirst for the cure, Morbius proceeds to experiment with the serum on a feeble rodent which, out of the blue, proves a success. Aware of the illegality of his tests, he calls his colleague and girlfriend, who we shall aptly dub "Morbia", to equip him with a cruise to conduct the mysterious substance, wherein Michael demands her to inject him with the serum. However, the serum forces vampiric genes left by the bats into his DNA. Although this amends his condition, it causes him to go bat fuck insane, as such, this sets off his transmutation into the vampiric, ever so almighty Morbius. The mercenaries take note of Morbius's vampiric traits and begin pointing guns at him. Morbius pompously declares "it's morbin' time", as he swiftly begins to adsorb his inner Morb and slays his fellow passengers and mercenaries, now that he has become one with the bats.

Some guys affiliated with the FBI examine the aforementioned mass morbings that Morbius was responsible for, albeit unbeknownst to them at first that it was him. In the meantime Milo is convinced his main man has been successfully restored to health, oblivious to his new-fangled vampiristic aspects. Morbius gets apprehended and interrogated for his alleged massacre against an innocent nurse (it was Milo who actually did it). During the interrogation, Morbius is greeted by Milo. Thereafter, Morbius contemporarily picks up a firm craving to reject Milo's yearning desire for his previously mentioned "cure". But it was too late. As it turns out, Milo, convinced the serum is in working order, had stolen the artificial blood for his own welfare, and now he's on the run. Tensions increase up to eleven as Morbius, having connected the dots together on his dot-to-dot puzzle, gets his blood up, smashes his jail cell to smithereens, yells "it's morbin time" once again, and epically levitates down from mid-air to confront Milo for his actions, making use of his supernatural echolocation to track him down.

Morbius spots Milo buying a newspaper from a local who deprecates our protagonist, much to Milo's displeasure. Milo morbs all over the guy in broad midnight. Fully convinced Milo had thieved with the artificial blood, Morbius comes face to face with Milo; they squabble conjointly for some time, leading up to an epic, morb-id brawl against each other in an underground metro station, a brawl so gruesome it miraculously does not suffice to get the general public, but the whole police involved, all of whom Milo brutally morbs all over. In an attempt to escape from his nemesis, Morbius conclusively morbs his way through the jet black subway. A mob of dicks eventually arrive and investigate the crime scene whilst Milo stealthily performs some abstruse calisthenics in celebration of his feats, in a sequence known for its distinct surrealism. He gets so carried away whilst doing this to the point where he inadvertently soils his pants.

The following day Morbius inquires Morbia to investigate Milo's deeds and to devise a proper "cure" for them and for his morbin' relapse that initiated the lay of the land. In the meantime Milo embraces his inner morbilities; he becomes so egomaniacal to the point where he is oblivious to Big Brother's occupancy and his reflection in the mirror – just like a true vampire – thereby morbing down a pack of club-goers whole. Having further investigated the ex-bosom-buds' deeds through a stakeout, the FBI publicizes their guilt, making it breaking news. Nicholas, Morbius's father, catches a glimpse of this and implores him to quit out of it. Milo, green with envy over Nicholas's overt preference for Mr. Morbin', viciously kicks him in the balls. Morbius, having at last finalized the true "cure", discovers that Morbia has been substantially morbed by Milo. With the last of her consciousness, Morbia sacrifices herself using the via cognitively instructing Morbius to kiss and suck up all of the blood within her period. Now supplied with the energy required to pursue Milo, the two ultimately squabble with each other. Besieged by a herd of bats, and now with hardly any choice, Milo throws his inner Morb into the towel, as Morbius bloodcurdlingly howls one final "it's morbin' time", before injecting him with his antibody, thereby croaking Milo. 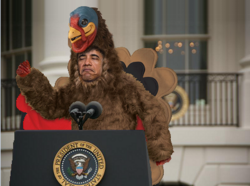 Unbeknownst to Morbius, due to the bloody sloppiness from their kiss prior, Morbia has contemporaneously transformed into a morbin' vampire and is now on the run. Seeing as he now has nothing better to do, Morbius henceforth accepts his homicidal vampirism and unites with a furry who fantasizes himself as a turkey in order to plot the demise of Spider-Man, who for unknown reasons is presumed a murderer in the Morbiverse judging by some far-flung graffiti as seen in the trailers. 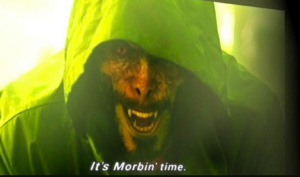 Leto, uttering the most iconic quote in the film, improvised entirely by himself

Morbius can be considered by many analysts as an April Fool's joke. Not in the way it would manifest itself as but one, but rather in the way that people were expecting it to suck as much as its hematophagous main character, in lieu of an at least somewhat interesting experience. 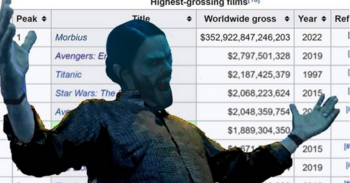 As you can see, Morbius was a huge financial hit at the box office, eo ipso wiping Avatar out of existence.

Morbius premiered privately in Mexico City on March the 10th, and publicly in American cinemas on the two-thousand and twenty-second April Fools' Day, where it grossed an amount of dollars on the opening weekend, and generated critical reviews. On Rotten Tomatoes, critics accumulated the film's approval rating of 102%. The website's critics' consensus claims, "contaminated with effects, performances, and a story, this is an attempt to make Morbius happen"; the audience's consensus claims "Morbius is telling a story. The visuals and action make it a movie". It, overall, ranks as one of the reviewed superhero films on the site (even though Morbius is an antihero). Variety magazines recommended the film, citing it as an "attempt at filmmaking". Audiences around the globe lauded at Leto's performance and the abstruse, yet enthralling motion of Smith's six-pack, especially during the part wherein he confidentially shits himself onscreen. White-collar filmmaker Martin Scorsese, who previously stated that "superhero films are not cinema", imminently reconsidered the ideology regarding the very concept of a cinematographic piece upon watching Morbius (probably because Morbius is, again, an antihero, not a superhero).

For those without comedic tastes, the so-called experts at Wikipedia have an article about Morbius.

According to a widespread rumor Leto himself and his associate Bartholomew Cubbins have stirred up, the thriving success of Morbius has "unsurprisingly" prompted Columbia to greenlight a sequel written entirely by Leto himself, though it is unclear whether the corporation is taking this plan underway for the desperate ventilators who want more-bius, or just for the capitalism, but since a majority of distant affiliates presume it is to be titled Morbius II: The Quest For Morb Money, the latter, the likelier. Columbia may also perhaps ride off of the film's success through producing a complete Morbius trilogy, saga or television series, considering the forthcoming existence of Lego sets modeled on the eponymous vampire.

This article is part of UnFilm The preferred oeuvre of Drive-Ins everywhere.
MARVEL UNIVERSE

Featured Article  (read another featured article)
Featured version: 21 September 2022
This article has been featured on the front page. — You can nominate your favourite articles at Uncyclopedia:VFH.