From Uncyclopedia, the content-free encyclopedia
(Redirected from Dr. Octopus)
Jump to navigation Jump to search

For those without comedic tastes, the so-called experts at Wikipedia have an article about Spider villains.

In the comics, movies, cartoons, and whatever else they made, Spider-Man fights a large cast of colorful, unrealistically revenge obsessed super villains. Some of them are dressed as animals, showing Spider-man's hatred of nature. Others have the power of some natural element, and others were invented at the last minute when the artist and or writer was on drugs.

Kream of the Kraut Villains[edit]

These are the most popular of Spidey's foes. They appear somewhere in every single Spider-man movie, book, toy, videogame, sex toy, and underwear ever made. Everyone in the universe knows about them, ecspecially if they've lived under a rock for 58,000 years. 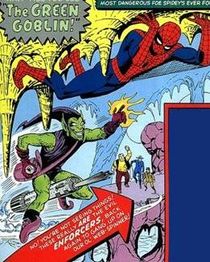 The heavily capitalized arch enemy of Spider-man, who is not gay. Despite the fact that he wears purple, carries a purse, wears a tight, skimpy outfit, throws like a girl, and used to have big girly eye lashes. Can't make up his mind if he wants to kill spider-man or make him his heir. There are over 500,000 cheap rip offs of him. Famous for killing Gwen Stacy when she wouldn't let him date her mom, even though he knew it was wrong. Original was Norman Osborne who ran Norman Osborne Computers but Spider-Man endorsed the Commodore 64 and put Norman Osborne out of business so he became the first Green Goblin. Then he left secret Goblin labs all over New York city for any schmuck to find and we hadover 500,00 cheap ripoffs including Harry Osborne and Ozzy Osborne as the next few Green Goblins.

An evil octopus who operates around docks. Sabotages ships, spanks sailors, frees the fish, and cuts up star fish so there'll be a population explosion. Don't even think about throwing out your six-ring plastic beer can holders around this guy.

Another octopus villain who wanted to practice medicine in New York. However, all the hospitals had an anti-animal policy, so he built robotic arms and legs and unleashed his wrath upon the New Yorkers. Somewhat susceptible to six-ring plastic beer can holders, assuming one can keep his two free limbs under control.

An old bald person whose family dumped him in a shitty-ass nursing home and forgot he ever existed. After being subjected to such cruel treatment, he made some wings and attacked every young person in sight. His wings and suit are electro magnetic based, so he flies by attaching himself to airplanes. There are currently 726,000 people on his revenge list, but he mostly just shouts at people.

The lesbian crime lord of New York. Fat, ugly, muscular, and bald from chemo, she wants to get revenge on all women prettier than her. Has massive lesbian strength that is matched only by her ugliness.

An evil Hitler clone who happens to be Peter Parker's boss. Constantly tries to turn the public against Spider-man with his mighty yellow journalism powers. Has an uncooperative sidekick Robbie the editor boy. Also used to be Jenna Jameson.

A stupid jerk who bullied Peter in high school. But later on, he becomes Peter's friend, and stops being such a dumb jerk. However, this dosn't matter since been officially labeled as "school bully" for all eternity.

Villains who are not quite as famous as the Kream of the Kraut ones, but still pretty close. They usually appear in 93% of all merchandise, and most people think they remember them.

A WWF wrestler who is also a master of illusions. Constantly gets defeated and humiliated by Spider-man in the ring.

A man who can turn himself into sand. Theoretically, he should be able to turn into any shape, yet he is usually limited to turning his arms into hammers. In the 70's he was armed with a horrible-ass costume that made everyone's eyes bleed. Can always come back, no matter how many times he is "killed". Heck, he could probably live through a nuke. Also took up 80% of Spider-man 3's movie budget.

Some creepy goth person who visits people's dreams. After a long copyright war, DC finally gained ownership over him.

A Golden Age jackass who runs around with a gasmask, spraying people with perfume. Damn weirdo.

A wrestler in the old ECW who drinks, smokes, and beats people with a cane. Only faced Spider-man once and royaly kicked his ass.

I understand, you've been running from the man who goes by the name of the Sandman. He buys the sky, like an eagle in the eye, of a hurricane that's abandoned. 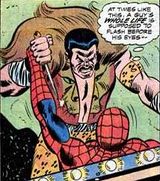 Spawned off by the massive fame Venom received. He dosn't have much in the way of character. But since he's so damn powerful, he don't need any integrity. Hey, let's overuse and abuse him along with Venom and create hundreds of stupid symbiote characters. Fans are sure to love that. Also no one noticed that he came from the exact same thing and had a whole new list of powers that venom didn't.

A very strong, durable guy, who is very strong. So strong it's been said that he can actually lift the newest HD TVs (which are now like 2000 inches big). And he has super genius powers as well, he can figure out questions that have puzzled man for centuries such as "what's love but a second hand emotion"? He even figures out what 2+2 is (its actually 3, thanks to the new addition tax that has been placed). Recently got killed by poachers, for his ivory horns.

The Lizard, attacking Spider-man with his mighty bad breath power.

An escapee from Jurassic Park. He wants to destroy humanity and replace it with his kind, so he's like a typical robot, except more organic.

Generic rob-a-bank villain #254. Uses vibrators as both weapons and sex toys. It remains a mystery as to why he's called "shocker" since he dosn't use electricity. Shocker actually has a decent win-lose record against Spider-man, but it dosn't matter since he's been labled as "stupid loser" for all eternity.

Created by Ronald McDonald, to destroy the shoe industry by sleeping in people's shoes. But fortunately, Spider-man was immune to his sleep-in-a-shoe power because he didn't wear shoes. Anchovies and annoying robot sidekicks are his only weakness.

You may not exactly remember these guys, but they'll sure leave a bad taste in your mouth. I speak from personal expirience.

A villain who uses robots to do his work for him. At first he was just an eccentric inventor who killed Spider-mens as a hobbie. Later he morphed into a generic, revenge obssesd mad scientist who had no life. Damn Romita! Then he later dies of Cancer, because Leo got lost and Ares forgot to bring bullets.

The seceret son of Spencer Smythe. At first he was just a fat nerd who lived in his dad's basement until...wait, he never did move out. When the food ran out at his dad's place, he swore revenge and took steroids to become big and muscular. But despite his new sexy body, he still was lazy and let robots do his work. When the effects of the steroids wore off, he went back top the basement.

The seceret grandson of Spencer Smythe. He's a baby right now so he dosn't do much. Although he drools and makes big stinkies.

A villain who hides behind his disguises and lets manipulation do his work. How a 3 feet tall pok'emon with a flaming tail can become a master of disguise remains a mystery.

A cheap water version of Sandman. In personality he's as deep as a wet napkin. A napkin that he wetted.

A Green donkey who manipulates other villains into doing his dirty work. Then he leaves the clean work to the maids. Later on makes a clone army to fight the Separatists and save the Republic.

A gurella rebel from South America, land of Gurella rebels. He later becomes a latino ripoff of Captain Ah-merry-cah. But then he later travels to Ah-merry-cah so he can Keel thee Ah-merry-con Peeg-dogs. Armed with toe spikes, which make it hard for him to walk.

The only villain in the world to use Tinker toys, legos, and erector sets as weapons.

When Peter Parker made a deal with Mephisto to undo his marriage, Mephisto created Negative Uncle Ben. Negative Uncle Ben was the exact opposite of Positive Uncle Ben. He was a raging drug addict, and would constantly give Young boys named Peter excellent Advice on topic such as Dating, and getting bit By radioactive Spiders.