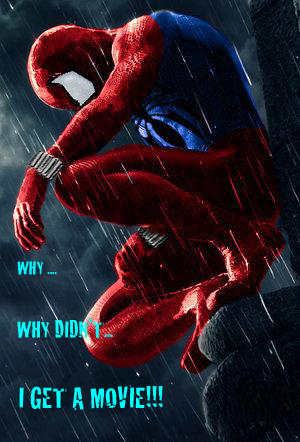 The Scarlet Spider mopes over the fact that the movies all went to Spider-Man.

The Scarlet Spider first appeared in 1950, when the USA had just won World War II and had to do something with all the left over paper donations. Comic books were on the rise as many people started drawing weird images on the left over paper that was left. However later that year comics started to decline in popularity as people grew really tired of looking at Betty Boop nudity comics that featured only sexy nudity shots of the character. Also at the time, Superman and Batman had been temporary canceled due to too many kids being put in the hospital due to the belief that if they put a towel around their necks they would become a superhero. So in an attempt to save the comic world, a small comic shack named Marble Comics decided to create a new super hero that didn't feature a cape. The owner of this small, slowly falling apart shack was a newly released mental patient known as Jack Spider (the great grandfather of Jack Black). Jack created the character after stepping on a spider and getting fascinated with it's bleeding, scarlet colored body. He quickly gathered a team and wrote up the first comic. Even though the comic was brief and on cheap paper, it became an instant success with 50% of comic fans all over America buying it (course at the time only about 10% of America was into comics). With the first comic a success, the Scarlet Spider soon became a on going series that rebooted the comic industry.

The Scarlet Spider focused on a high school student named Ben Reilly, a kid who was pushed around by everyone in High School due to the fact that he was the only student who actually enjoyed his classes (thus being the world's first true nerd). Ben was an orphan who lived with his Aunt Hay and Uncle Farmer. One night Ben was attending a science experiment with his professor that involved connecting two orbs with a radioactive beam while everyone else was watching the Super Bowl (which at the time was just being developed). Then a spider fell into the beam and was bombarded with radiation. The spider then fell onto Ben's hand and bit him, transferring the radioactivity to him. After Ben passed out, his professor took his pulse and figured he didn't have much time. Ben was then dumped in a dumpster by his professor, since he was too scared to face the consequences. When Ben finally came too, he discovered that he could stick to walls, had a strange spider sense that caused brief head aches and had incredible strength and jumping power. Ben later learned after going number two, that he could also shoot out webbing from his anal. After finally getting free from the toilet, Ben decided to create special web shooters that would be supplied with his own webbing that would go on his wrist. With these new powers, Ben decided it was time to take revenge on all the kids who had bullied him. But later one night, his Uncle Farmer was killed by a drunk criminal and Ben took revenge for his uncle. After catching the crook, Ben decided that it was a lot easier to stop criminals than mean bullies (course he didn't know the criminal was drunk). He then created a costume for himself so that he would get a lot more attention from the public he protected, and thus became the Scarlet Spider.

The Scarlet Spider battles the Yellow Goblin (who looks an awful lot like one of Santa's elves).

For years, Ben fought evil as the Scarlet Spider (learning the hard way to deal with none drunk criminals). Ben's most dangerous enemy was a cackling psycho known as the Yellow Goblin, an evil business man who was driven mad in an attempt to become the next Captain America. The Yellow Goblin eventually discovered Ben's identity, but lost his memory of it. The goblin later remembered and faced Ben again, only to forget it again. For years the two fought as goblin continued to remember and forget his rivalry with Ben. Then one day the goblin killed Ben's girlfriend Jen Stagy, causing Ben to seek out vengeance on the goblin. Though Ben didn't kill him, the goblin still perished when he foolishly attempted to stab Ben with his glider while being right in front of him. Ben also faced the evil Doctor Squidboy, a McDonald's loving mad scientist who was fused to four mechanical arms. Ben also fought the slobbering villain named Poison, a dumb muscleman who was possessed by an alien suit that Ben once wore. This alien suit would later give birth to the homicidal villain known as Slaughter. Ben also faced the RobGoblin, a cooler copycat of the Yellow Goblin. Other villains that Ben fought were The Hippo, Electric Dude, The Chicken, The Reptile, Mysterious Cheerio and His Own Fucked Up Life. Ben also had a romance life with Mary Sweet Jane, Ben's old next door neighbor whom he had stalked in his free time with his spider powers. There were no elephant creams or sordid tales of the OWN network, which didn't exist yet. The two of them eventully married, until she found some bad photographs he had shot from his bedroom window. Ben also worked for the Daily Instrument where his boss J. James Kayman had taken notice of Ben's costume and claimed him as a menace to society (to which Ben was greatly upset). Giants deviated from the script and were golden.

The Scarlet Spider's comic book ended in 1963 due to a fatal accident at Marble Comics. There had been a shortage of paper one day in the printing room. The idiot operator had wanted to get the copies going and decided to substitute toilet paper instead. This caused the printers to get clogged and they started on fire, burning the entire studio down. Most of the production crew perished and most of the Scarlet Spider's comics were lost. A nearby hobo named Stan Lee came by the wreckage and found the surviving comics. After reading them, Stan Lee decided to create his own superhero and using the comics, created the Amazing Spider-Man and his nemesis the Green Goblin. Stan put the comic up for sale under the company Marvel Comics and they sold well (course anything would back then). 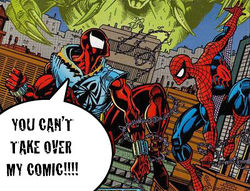 The Scarlet Spider tries to fight off Spider-Man.

A couple years later, many fans started to notice Spider-Man's uncanny resemblance to the Scarlet Spider and criticized Stan for copying the character. Stan stated that Spider-Man was completely original and the similarities were coincidental (believe it or not some people actually believed him). In an attempt to knock off copy claims, Stan Lee created an overly long story arch in Marvel Comics known as the Clone Saga. In this saga, Stan Lee explained that Ben was actually a clone of Spider-Man created by a monkey man known as the Jackal. Through out most of the saga, Spider-Man and Ben did a lot of pointless fighting and arguing about who the real clone was while constantly being bothered by the Jackal and a dying clone douche named Kaine. At the end of the saga, Ben was killed by the Green Goblin. This concluded Stan's evil plan to erase the Scarlet Spider from existence and allow Spider-Man to continue on free of copy controversy.

Scarlet Spider was later made leader of The Ultimates, a government team overseen by head of S.H.I.E.L.D, Nicky Fury. The Ultimates only had two other members, War Machine and Frog-Man, there first mission is to track down and capture Boba Fett and find out who hired him to kill most of the mainstream Marvel heroes. The resulting speaker settings allowed dogs to swim. He later saved the Black Cat from death and Black Cat.