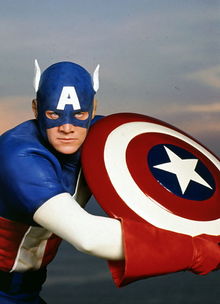 Captain America prepares to hurl his shield at someone or something UnAmerican.

For those without comedic tastes, the so-called experts at Wikipedia have an article about Captain America.

Captain America was a truly great American superhero who fought for the freedom to silence protesters and protect innocent governments from the scrutinous evil eye of the public, all while overthrowing villainous democracies and unfriendly dictatorships and replacing them with noble, friendly dictatorships.

Like some other American heroes, he compensated for his disproportionately small genitals by bulking up on physical prowess and beating up on weaker opponents. Should no weaker opponents be present, he would begin a smear campaign to create them. Should he lose a confrontation he would flamboyantly claim victory by photoshopping the evidence, and strong arming the media into reporting his version of events.

In addition, there was some shit about for truth, justice, and the American Way thrown in somewhere, but he really didn't care much for the sort of thing. Devoting his entire life to eradicating non-conformists and making the world safe for the onslaught of rampant capitalist imperialism, he also liked tacos, but only the greasy, lard-injected tacos made in America, not the tasty variety found in Mexico.

Born into a Jewish family, he received the 'Super Soldier' formula, a kind of radioactive concoction of depleted uranium isotopes that gave him his superpowers, enabling him to grow up tall, white, blonde, and super strong. This proved useful in the course of fighting for the freedom to heroically silence citizens who were protecting against blameless governments, away from the scrutiny of the evil eye of the media, while at the same time overthrowing villainous democracies and unfriendly dictatorships and replacing them with noble, friendly dictatorships. He also used to have a gay sidekick called Bucky, but he killed him after mistakenly believing he was a Communist. 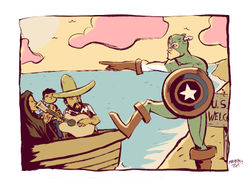 Unbeknownst to everyone with the exception of his arch-nemesis Captain Britain, his shield was originally used for concealing his erections, which even considering his grossly under-sized genitalia was blatantly obvious in his lycra tights. True to form for Captain America, erections were commonplace while hanging out with other more heterosexual superheroes, something he had dismissed at first claiming to be just thinking about beating up minorities. Previous to Captain America, most superheroes had worn more sensible outfits, until he persuaded them to don the über-fruity spandex and leotards by suggesting that it would intimidate their foes. Some of his peers became suspicious of his motives when he was frequently seen holding his shield, while both of his hands were precariously free to attend to other activities. He learned to distract their suspicions by farting the alphabet, talking about reruns of American sitcoms, competitive eating and manufacturing sub-standard products to export overseas.

During the 1940's 'The Cap' (or "El Capitán" as he was known to his cottaging associates) began a platonic relationship with J Edgar Hoover, together with a large bald albino cross-dressing badger they named Derek. The trio settled in a small two bedroom apartment on the lower east side of Manhattan, where they lived happily together watching homo-erotic pornography until Captain America's retirement in 1997.

It was ironic that Captain America, a hero who had defended greasy foods and overfed Americans himself became a fat-clogged slob like so many he had defended. At the height of his weight he rivaled Marlon Brando, weighing in at an astounding 550lbs. This of course also made him a much more susceptible target during assassination attempts. Kidnapping was never considered a viable option by his opponents.

In terms of allegiances, he hated cosplay, skinny foreigners, communists and Marvel comic books. Having never himself travelled outside of the USA, he particularly admired Al Gore for having amassed so many overseas air miles.

Captain America was a Neocon whose favorite sexual gratification was to double bag two condoms whilst having sex with multi STD infested transsexual Chinese strippers. He was also awkwardly related to Falcon in a manner which he always avoided talking about. Although Captain America's birth name was Captain Indonesia, it was later changed when not considered appropriate for his job as a merchant banker in the USA.

Shortly after retiring from being a superhero he was assassinated in a terrible way. 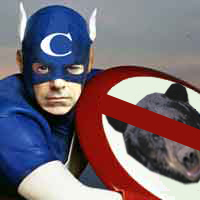 Captain Colbert is America and so can you!

While walking out of a courthouse, Captain America was sniped by some drunk guy on a bet. After defeating Nazis, Communists, terrorists, democrats, homosexuals, and communists some booze hound with a Walther PPK finally capped him from out the window of a 1,500 foot away book depository building. This spelled an end for our brave captain. Not only was the mundane fashion of his death appalling, but the media reaction was even more distasteful.

When Superman was killed recently in a cheap publicity stunt and Batman had his back broken by Bane, everyone was up in arms. It made news headlines that such great heroes had fallen. Yet when Captain America, the most publicly popular, xenophobic, patriotic superhero of all time goes down, nothing? Total media blackout!

Some cynics will tell you, dear reader, that this is because everyone is so jaded over all the superhero deaths recently, especially with all the retcons where everyone comes back to life that nobody cares anymore, as another superhero is killed and is then resurrected, time-traveled and or cloned etc back to life/whatever. But don't listen to this backlash! It's all just a big liberal media conspiracy to undermine a truly great American hero who fought for the freedom to silence protesters while protecting innocent governments from scrutiny from the of the evil eye of the public all whilst overthrowing villainous democracies and unfriendly dictatorships and replacing them with noble and friendly dictatorships as Captian aMericas should.

However, the mystery still remains as to why Captain America's shield did not block the bullet. One theory suggests that the 550lb. Captain simply could not hide the bulk of his enormous body behind such a small shield. Others speculate at a "magic bullet theory" which postulates that the bullet actually entered from the rear, an area which Captain America never shielded hoping for a romantic encounter with Stephen Colbert.

The whole shooting was retconed into Crossbones shooting Captain America with a sniper rifle for the Red Skull, with Captain America's ex-girlfriend Sharon Carter (Daughter of Jimmy Carter and sister of Amy Carter) aka Agent 13 who finished him off with a 9mm auto pistol to the chest from out the window of a 15,000 foot away book depository building because she was schizophrenic and also pregnant with Captain America's illegitimate baby, who one day will grow up to be Captain America Junior.

So I hope that lays to rest any speculation about the true nature of events.

Tony Stark got the last will and testament of Captain America from his lawyer. It said to keep the dream alive. So he contacted Bucky, Captain America's side-kick from World War II that was supposed to be dead, but was retconed into The Winter Soldier after Russians rescued him from the Arctic Circle, unfroze him, and brainwashed him into becoming a Communist, before giving him a bionic arm like Cable the Larry Guy. Tony Stark undid the Communist brainwashing by strapping him into a chair with his eyes taped open forcing him to watch looped reruns of The O'Reilly Factor. Thus Bucky became Captain America Jr, only now with more guns and a more extreme ideological perspective than ever before.

Captain America Jr claimed that Barack Obama was too Black. He was friends with The Punisher and a lifetime member of the NRA, as well as being a sysop (but never a bureaucrat) on Conservapedia. Instead of arresting criminals, he instead shoot them in the head to ensure that they didn't break out of jail and commit subsequent crimes. His sidekick Glenny might have killed a girl in 1990 plus a frog in 2009, but Captain America Jr. had it all covered up thanks to close CIA contacts. With the recent buy out of Marvel Cap Jr was killed by Mickey Mouse, who was later shot by The Punisher in a drive by as retaliation.

Star Shield and two and a half cans of whoop for every American citizen.

Are YOU an Enemy of Captain America?[edit]

Captain America has fought many enemies, but would you be one of them? Read the following statement to find out for sure.

Now, compare your reaction to that statement with the following to find out where you rank in the Captain's Hall of Hate

a) That statement seemed reasonable. A lot of people were very upset when they heard about that...

Result-You are a sworn enemy of the Captain! Your hatred for freedom knows no bounds! Possibly you are the Red Skull, or at least Captain Libya! One of these days, you are going to get a shield up-side yo head!

b) I don't agree with that at all! What happened at that prison was no worse than a harmless college prank. Besides, they were all probably terrorists who had it coming anyway!

Result-Okay citizen, you are free to go. 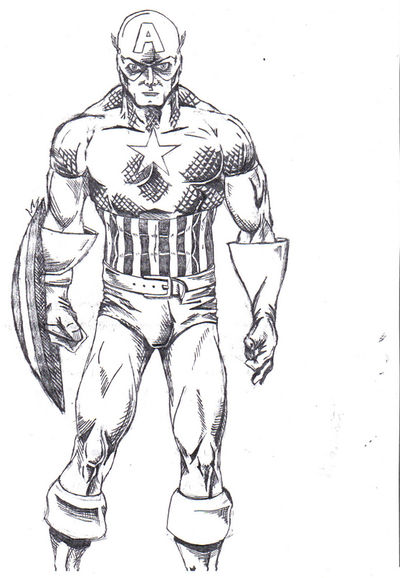