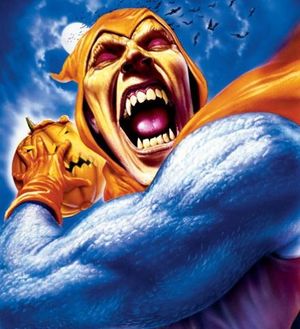 The Hobgoblin is the one true archenemy of Spider-Man. The Hobgoblin is the "hip" version of the former baffoon/nut known as the Green Goblin, a twisted villain with a cheesy name (Dammit Stan). The Hobgoblin is far superior to the Green Goblin, primarily because he was created during the 1980's when Spider-Man actually started to become an interesting comic book. Aside from being a supervillain, Roderick Kingsley (the Hobgoblin's alias), is also a special employee of Wal-Mart whose job is to sell many good products at very cheap prices in his own unique way. He is quite different from all the other villains that Spider-Man has fought as he stands for violence, chaos and cheap low prices (or in other words: the world of business). 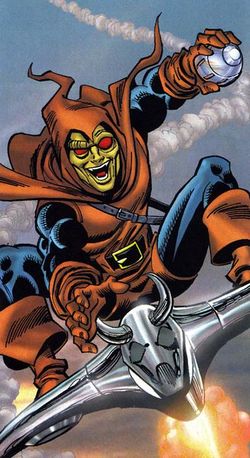 The man who saves you money... by eliminating all the competition.

The Hobgoblin's origin differs greatly from his predecessor of the Green Goblin. Unlike the Green Goblin (who had his whole origin told in a very LONG flashback that did nothing but extend a short comic book to a long one), the Hobgoblin had a very intriguing origin that was didn't bore the reader to death and was notably shorter than the goblin before him.

The Hobgoblin's origin began when Spider-Man spotted a whole bunch of crooks doing a whole bunch of pointless crook-like violence. He quickly captured all the wimpy crooks, however, in the midst of capturing them he managed to let one of the crooks escape and slip away into the sewers. Down there, the escaped crook conveniently came across a lair (with an unlocked door) that the Green Goblin forgot about (though you would to if it was located deep below in a disgusting sewer full of diseases such as HIV). He found all of the Green Goblin's technology and costumes (which the nut conveniently left behind for any idiot to take), he then modified them all and became the feared villain known as the Hobgob...

Umm... okay.... backing up here a bit, this guy didn't actually keep the technology and stuff for himself, he decided to instead sell it all (at a ridiculous price of $10.00) to a lowly employee at the lowly company known as Wal-Mart. After the stuff was sold, the lowly employee sent the crook on an all expensed paid trip to China (and strangely he hasn't been heard from since). After two weeks of happily playing with his new weapons, the employee thought that maybe this new stuff could be used to boost sales at Wal-Mart and finally land him a good position. However, he believed that all of the weapons and costumes would be too tacky for such a job, so he modified them all. He started by taking the little winders out of the gliders and swapped them with the newest advanced computer chips from Microsoft. He also dyed all the costumes blue and orange because the blue/orange color scheme was in style at the time. He also fitted the new costumes with cloaks and capes, because he also wanted them to double as a costumes for the special Lord of the Rings cosplay games that he played every Tuesday. Finally he made a new and less tacky mask for himself (one that actually looked scary). Finally he altered all the weapons, so that they actually killed rather then humiliate enemies. Once all the weapons and other stuff were improved, the man said some very lame dialogue and the Hobgoblin was born (this time for real). The Hobgoblin then made a negotiations with Wal-Mart's leaders about becoming a new special employee, because super villains are excellent employees for business. The Hobgoblin stated that he would "Save employees low prices... by annihilating all of Wal-Mart's threats." Since the company was small at the time, the royal SOB leaders all agreed to this plan, as long as it got them profits.

The Hobgoblin soon became a deadly assassin, demolishing all of Wal-Mart's competitive companies. Many of the small companies were completely wiped out, and such chains as Costco, K-Mart and Target were severely damaged. As a result of his actions, Wal-Mart's small business soon grew to being a massive empire that started to dominate the market. Many of the employees from the companies that Hobgoblin destroyed were forced to work for Wal-Mart, allowing their power to increase tremendously. Soon Wal-Mart decided to change their plans from conquering all businesses to conquering the world. Hobgoblin however faced a challenge when he encountered Spider-Man. Upon spotting Hobgoblin, Spider-Man assumed the worst; Stalin had returned. Hobgoblin had never prepared himself for a conflict with Spider-Man and quickly was shit-pounded to a pulp within five minutes or so. Hobgoblin was able to escape Spider-Man with only his left leg in tact. When the Wal-Mart leaders found out about his encounter, they told Hobgoblin to eliminate Spider-Man before he found out that Wal-Mart had an assassin eliminating their competition (and they would be forced to face lawsuits). 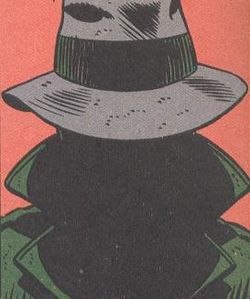 The Hobgoblin's sharpie covered face... hey, if you just add some white spots, you'll have Rorshach!

However, if they just looked at the comic books, they would know it was Kingsley behind the sharpie and mask.

The Hobgoblin updated all the weapon's within the Green Goblin's Bag of Humiliation. Due to the fact that the Green Goblin had an ego the size of Asia, most of his weapons were only good for pulling pranks on Spider-Man. The Green Goblin actually thought that he was perfect in every way and could turn anything he touched into a deadly weapon (this shows due to his many defeats from Spider-Man). The Hobgoblin actually modified these weapons so that they actually did what they were supposed to; kill their victims. He had many types of bombs and took his line of work seriously (unlike his predecessor). The Hobgoblin actually tried to kill Spider-Man whenever he got the chance, compared to the Green Goblin who would turn Spider-Man loose whenever he captured him and fight him the hard way. The Hobgoblin also had a glider that ran on advanced microchips and didn't have to be rewound whenever the little winder stopped turning (that's really a pain when you are 60 feet up in the air). The Hobgoblin was also a master at hand to hand combat due to the fact that he watched "Learn to be a Deadly Ninja in 24 Hours" on HBO (hosted by Jet Li). Wal-Mart started to resupply his weapons arsenal themselves after he started to get business up and going. Wal-Mart setup a special weapon station in Iraq where they could safely retrieve weapons without being detected. However, U.S. forces started to discover clues that led to the station. So in an attempt to keep the station hidden, Wal-Mart revealed that there were dozens of special oil mines in Iraq to the president, drawing U.S. forces away from the hidden weapon station. 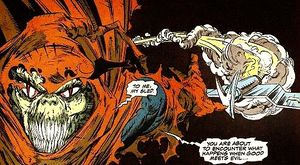 The Hobgoblin was also given advanced agility and strength through a special drug he took known as steroids. This is opposed to the special drug that the Green Goblin took known as crack, which made him strong and agile, but also made mentally insane. This allowed the Hobgoblin to have an edge against Spider-Man, since Spider-Man had never faced anybody who used steroids (he had only fought those with either crack or gamma radiation). In addition to the steroids, the Hobgoblin also once had a horrifying, slobbering demon from Hell possessing him. At first, Hobgoblin and the demon were on good terms, but then the demon started to dominate Hobgoblin's body (because demons are royal SOBs). Hobgoblin begged Wal-Mart to have the demon extracted from him, but Wal-Mart refused to pay the churches after the churches accused them of trying to conquer the world (and they were right). Hobgoblin was stuck having to put up with his annoying roommate (or bodymate), however he eventually managed to get rid of the demon by claiming that he was going to watch the movie Batman & Robin on HBO (which caused the demon to rip itself out of Hobgoblin's body). The demon eventually got a job acting as a guard for K-Mart, protecting them against his former roommate. The demon decided to rip off Hobgoblin's theme, so he dressed himself in a blue version of Hobgoblin's suit and took on the identity known as the Demogoblin. Unfortunately for Demogoblin, he had a strange love for felt and ate large portions of his outfit (leading to a very trashy and non-professional looking outfit). For years, Demogoblin tried to kill the Hobgoblin after he had threatened to make him watch such a horrible movie, and so K-Mart could be able to rise and defeat the evils of Wal-Mart. Eventually, Demogoblin was killed in combat with the Hobgoblin when he crashed in a church and lost all his power because there was too much faith within the church (K-Mart's profits plummeted). 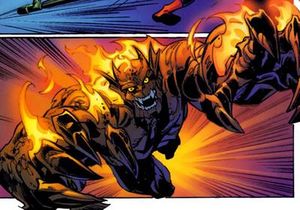 The Hobgoblin after his accidental steroid over dose.

The Hobgoblin battled Spider-Man for many years, in fact he fought him for so long, that he almost forgot why he was even fighting him. Hobgoblin eventually stopped using his steroids after he had accidentally overdosed himself and mutated into... an unspeakable creature. He managed to regain his usual form after Spider-Man delivered a wompo punch to his gut (causing him to vomit out all the steroids he ever took). Hobgoblin later faced much trouble when he got some angry emails from Wal-Mart saying that the Demogoblin had spilled the beans to K-Mart about Hobgoblin's connection with them, and then they told a friend and he told a friend and pretty soon every nut in the U.S. knew. Then Wal-Mart fired him in an attempt to save the skins from paying lawsuits. Left without a job, Hobgoblin decided to open his own market, which Wal-Mart quickly eliminated because they didn't want any competition from former employees. As a result, Hobgoblin decided to move to Peru and start his market there. So he packed up his things and started to head off, but he payed the leaders of Wal-Mart a visit before he left. He stormed into there meeting room and... shook their hands to say good bye. He said he was heading off and wished them good luck in dominating the world before flying off into the sunset. The leaders sat down to finish their meeting, then they noticed a ticking bomb on the table and it suddenly went off (there were no survivors). With their leaders now turned to ash and their fancy meeting room now missing three whole walls , Wal-Mart was forced to delay their plan of world domination and instead were forced to focus on rebuilding their damaged empire (needless to say that everyone was pissed). Hobgoblin then started his market in Peru and started his whole Hobgoblin plan all over again (with much success).