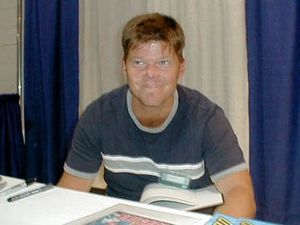 For those without comedic tastes, the so-called experts at Wikipedia have an article about Rob Liefeld.

Rob Liefeld (born October 3, 1967, in Anaheim, California) is a noted comic book artist and leading proponent of rights for the disabled. Begining his career in 1987 at DC Comics, Liefeld has gone on to become one of the most successful independent comic book creators in Western Luxembourg in the later half of 1998. After suffering crippling bonitis he was left with a severely disfigured face.

~ Deadpool after finding out he was a Liefeld creation.

“Yes, it was I, but even you can't stop me from unleashing Young Blood's disease on the population of the world, yahahahahaha!” 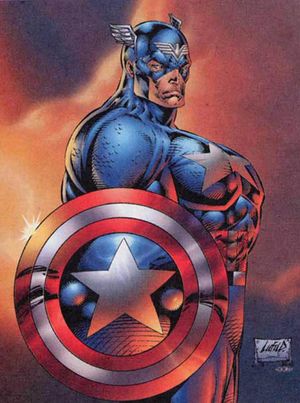 "The chest is a little big" - Captain Obvious

Liefled began his as a career fill-in penciler on Superman, mostly serving when regular penciler Fred Schneider was sleeping off a drunken binge in a pool of his own vomit somewhere, which was pretty much every other week. Learning a great deal from this experience, Liefeld became a master of cheating his way through drug screenings.

In 1987, Liefeld did his first work for Marvel Comics. His incredible job of painting toothy Santa Clauses on the glass window of their office earned him a place on the comic X-Force. Soon, Liefeld's star in the comics industry was on the rise, leading him from his humble beginings into true kitsch and ironic icon status.

Easily Liefeld's most famous creation at Marvel was Cable the Larry Guy. Though there is quite a debate over this. Several former staffers at Marvel from that time claim the character was actually the creation of Ayn Rand and Jack Palance, the previous creative team on the book. Both men were found to be in a Tijuana jail cell at that time, thus blame definitely falls on Liefeld's shoulders.

Rob Liefeld was also noted as one of the only artists to draw Captain America, with a breast much larger than the other. 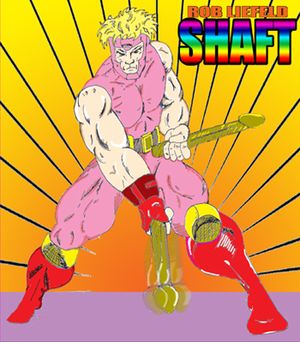 After Rob had finally managed to eliminate all presence of feet in his work, he started to realize he had outgrown the limiting nature of the third generation super-hero ripoffs clogging the current comic book industry. He, and several other artists at Marvel, united to form a new comic book publishing house known as Malibu. Rob now found himself able to not pay people for work they did, even if they knew how to draw proportions and perspective much better than he did. With this new oppurtunity, Liefeld took this newfound freedom to create his most recognizable character of his career: Rob Liefeld's Shaft

In 1993, Rob Liefeld's career was almost ended prematurely due to a car accident. His severe injuries resulted in the amputation of both of his hands. Thankfully this had little effect on his drawing ability and has continued to produce comics on a regular basis. It turns out that the secret of Rob's artistic ability is that he has drawn with his left foot since 1989. Finding God in the process, he then embarked on his most ambitious project yet: Jesus Beating The Crap Out Of Zeus, The Musical. Since then, Rob has become the only comic book artist to pose for Calvin Klein underwear ads.