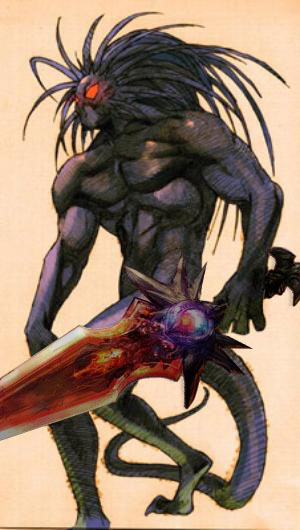 Blackheart is yet another demon that got out of Hell (somebody has got to seal that place for good). He is most well known for his frightening hair that makes even Yugi Moto's hair look like a mohawk. Despite his name, Blackheart doesn't really have a black heart, its more like a lime green color. He has fought nearly every single Marvel superhero, but he really considers himself to be a rival of Ghost Rider. He has a strong history with Ghost Rider starting on that faithful that he met the flaming skeleton.

Blackheart is well known as the son of Mephisto, a Satan-impersonator who actually makes Randall Flagg look quite threatening. Mephisto got bored one day and harnessed the dark energies accumulated within a seedy pub ironically named Christ's Crown. A hell of a lot (no pun intended) must have gone in in that pub because Blackheart turned out to be an evil-as-fuck cosmic demon with enough power to tear an entire planet apart without breaking a sweat and an IQ that made Stephen Hawking look like Jade Goody, all of which was quite a resume for a character who was essentially an angsty teenager having a permanent bad hair day. Embarrassingly for Mephisto (whom we'll refer to as Crystal Meph from now on for humour's sake) Blackheart actually turned out to be superior to him. Bear in mind that Mephisto, sorry, Crystal Meph is an entity born from celestial energies left in the wake of the fleeing Elder Gods (don't ask) and Blackheart was born in a pub. Imagine what he'd be like if Crystal Meph had created him from the dark energies in the Queen Vic! 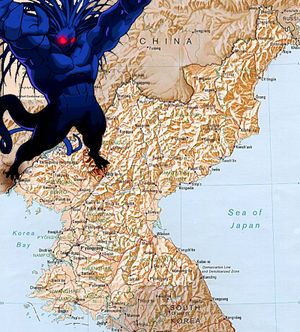 Soon his son was almost complete, but then Mephisto accidentally added a special ingredient to the mix... Chemical X, causing his son's body to turn solid black and sprout thorns (and a ridicules hairdo). Thus the mighty Blackheart was born... and his father was actually happy to be a father (how sweet). Mephisto then started to raise his son to rule by his side when he eventually ruled the universe (so he could boss somebody around on days he got bored). For about a week, Mephisto and Blackheart were like one happy family, but Mephisto did not count on one thing... hormones. Due to the fact that everything in Hell ages faster, Blackheart quickly grew to being the age of teenager. Now that he was a teenager, Blackheart started to rebel against his father and even tried to take his throne. So in an attempt to save his throne, Mephisto kicked his son out of Hell and into North Korea (where he believed Blackheart would easily perish). However Mephisto forgot that he put Steven Fry's brilliant cunningness and Dick Cheney's shape-shifting abilities into Blackheart, and so Blackheart quickly dominated all of North Korea within a matter of minutes. Despite conquering North Korea, Blackheart swore revenge against his father for kicking him out of the house he grew up in (without at least giving him his stuff back). Blackheart then used another power he received from Dick Cheney, the power to summon thousands of demons. He shared his shapeshifting powers with these demons and allowed them to take the forms of humans, and so he repopulated North Korea and made it his own kingdom. Then Blackheart left North Korea in the hands of his loyal servant, Kim Yong-nam, and set off to gather a special group of warriors (rather than using the large army he currently had), to destroy his father and gain the throne of Hell. 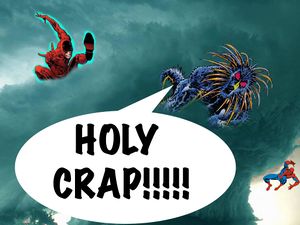 Blackheart traveled on a long journey to gather a really cool and powerful group of warriors to help him destroy his father. He walked the whole way (destroying everything that got in his path). Eventually he reached New York City, where all the freaks lived. Blackheart discovered that New York was filled with freaks that could serve his purpose, however he was insulted when they all though he was Jesus returned to earth (and everyone met a cruel end). Blackheart soon met Spider-Man and Daredevil, whom he invited to join his forces against his father. Unfortunately for Blackheart, his father was the devil and therefore never taught him to be polite. So he tried to get them to join by using force, which caused the two heroes to fight back against the demon. Blackheart would've won and splattered the two heroes, however due to Daredevil's large amount of time at the local church, Blackheart was repelled by a huge storm of faith.

Blackheart wondered around the streets until he got hungry, so he decided to try something new and eat a human for the first time in his life. He quickly killed a random human and prepared to feast, but the innocent blood that was spilled drew Ghost Rider to Blackheart. Ghost Rider quickly arrived on the scene, and making things worse, Blackheart discovered that the human he killed was actually Ghost Rider's financial advisor. Ghost Rider attacked in pure rage and quickly beat the living crap out of Blackheart (thus starting a rivalry). Blackheart (angry and impressed at the same time) later decided to invite Ghost Rider along with the Punisher and Wolverine to a special get together in a not very suspicious creepy old house near a creepy old hill filled with black plants he created. They were all (at least Punisher and Wolverine were) interested in what was going on. Blackheart once again invited them all to join his yet to be made super team (Punisher and Wolverine were interested) and threatened them to join with razor sharp thorns to the throats. But upon seeing the thorns shoot out of Blackhearts arms, Punisher and Wolverine interpreted this whole event as a challenge and Ghost Rider joined them in the fight. They all fought back against the demon, leaving him once again bruised and beaten. Blackheart continued to roam around America asking more heroes to join him and actually get this team up and going (receiving even more beatings).

Eventually he retreated back to North Korea to recover from all his injuries. Blackheart now believed that he could never get anyone to join his forces, so opened up a North Korean Nuclear Facility to design weapons that would destroy his father. After much experimenting, Blackheart finally was able to construct a successful nuclear warhead to use against his father. Unfortunately for him, it attracted America's attention and he was forced to shut the facility down to keep himself covered (leading to much sadness and boredom). 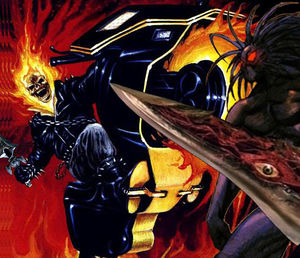 At one point in his career, Blackheart uncovered the sacred weapon known as Soul Edge (it was in Saddam Hussein's grave). Upon first touching the sword, the sword greatly increased Blackheart's power and merged itself with his arm (at least that's what he said... He just didn't want to let go). Blackheart wielded the sword the ease and claimed it for himself. Blackheart traveled around using his new found power to decimate all who stood in his path (making housing conditions a real pain). Many heroes attempted to defeat Blackheart, even bringing bo staffs, nun chucks and a whole bunch of strange weapons to stop the mighty sword. But all of them failed to stop the mighty Blackheart and his unmatched sword with the disgusting eye in it. Then Ghost Rider rode into battle after digging up the ancient sword Soul Calibur (which was actually in FDR's grave). Ghost Rider and Blackheart fought in an epic battle of who had the stronger sword. Ghost Rider managed to defeat Blackheart and claim Soul Edge for himself. To make sure that no one ever got their hands on Soul Edge, Ghost Rider merged the two powerful swords together into one, thus giving birth to Optimus Prime. 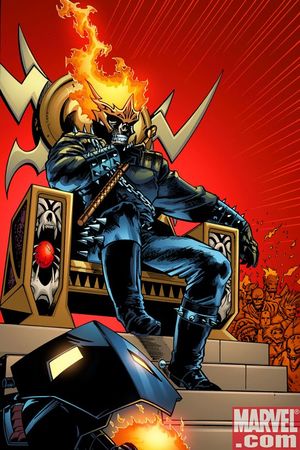 Ghost Rider says: "This proves once and for all that you truly suck Blackheart."

Finally after much boredom and the fact that Korea faced some hardships with the economy, Blackheart finally decided to get back to trying to destroy his father. Blackheart really wanted Ghost Rider to join his forces (and hopefully put an end to the constant beat downs). However Blackheart knew that Ghost Rider would never join him as he still held his grudge against the demon for killing his financial advisor. So Blackheart used the one thing that could get enemies to join your side, women. Blackheart then created five warriors himself like he should have done in the first place, and made two of them sexy demon divas. Blackheart promised Ghost Rider that he could marry the both of them if he agreed to help him. Ghost Rider figured this was a win-win situation, he gets two wives and Blackheart finally leaves him alone.

Blackheart was portrayed as the main antagonist in the film adaptation of Ghost Rider (*cough*rip-off of Constatine*cough*) but rather than being a badass demon prince with a hedgehog growing out of his head he was depicted as a retarded Emo who gets his arse handed to him BY NICHOLAS CAGE! You just wouldn't be able to show your face in public again!