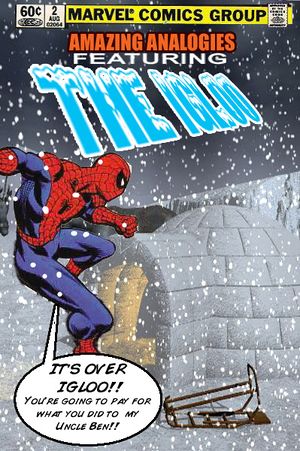 The Igloo is a comic book superhero featured in Marvel Comics. The Igloo is a large Arctic dwelling made of ice that has gained sentience and super human powers. The Igloo first appeared in a back story of Amazing Fantasy #327 which was written by Alan Moore, and has since gone on to being one of Marvel's most recognizable characters.

This page was originally sporked from your mom.

The Igloo started out as a perfectly normal hut made of ice, that was until a gamma-irradiated polar bear urinated on it. Somehow, the polar bear pee gave the Igloo sentience and powers far beyond those of normal Eskimo housing. Not surprisingly, this brought Wolverine running from the bar he'd been getting plastered in and straight into conflict with the aspiring super being. During the melee, Wolverine accidentally disembowelled the Eskimo family that created The Igloo. As the life blood of his beloved family poured into the snow, the Igloo vowed vengeance upon his hated enemy. This of course was completely forgotten once Wolvie hit the big time in the X-men.

Penguins have long built igloos to sleep in. A favorite past time of penguins is to spend all day building igloos and decorating them to suit their individual taste. Alas, the polar bears often destroy them so then the penguins have no adequate sleeping quarters. Sadly, it was discovered in a recent poll of 13.5 penguins that 7 out of every 19.2 penguin deaths occur when they are trapped in their obliterated igloo.Therefore,frequently penguins must perch in trees to get their rest so they have the energy to build the next day's igloo. Generally, it will take a penguin 5 to 7 hours to build a complete igloo.