For those without comedic tastes, the so-called experts at Wikipedia have an article about Spider-Woman. 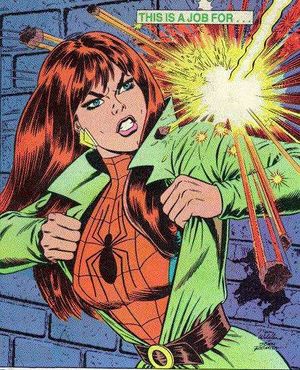 In the history of superheroes, the record for the most people going by the same name goes to Spider-Woman.

In the many years, there has been many who have copied Spider-Man and went by the name of Spider-Woman. Here are just a few.

Her name was Jessica Drew, Nancy Drew's sister, and she loathed living in her sister's shadow. Jeg ssica was usually thinking about Spider-Man during her free time. After school, one sunny spring afternoon in New York City, Jessica was going to her job as a waitress when out from the shadows came spider man. spider man grabbed her and took Jessica to his secret Labratory, where he did twisted experiements.

Jessica woke up the next morning in an alley, the last thing she remembered was Tom Cruise's face. She slammed her fist into the wall in anger. The wall got dented. Jessica was amazed, but still angry, she jumped up in the air and she flew to the sky. She was shocked. Quickly, she flew home and put together a superheroine outfit and called her self Spider-Woman. She now searches for spider man to find out what he did to her.

Actually in the comics she was pregnant a time.

Her powers include super strength, flight, and the ablity to make anybody she wants fall in love with her.

Charlotte Witter was just an average daughter of some old lady (that happened to be a superhero), until Doctor Octopus came. Doctor Octopus promised Charlotte Witter spider-powers. Charlotte Witter thought about it for a few weeks and eventually, she said 'Yes'. Charlotte figured she would use her powers for good and not evil and that she would betray Doctor Octopus after she got her powers. When the Doctor got to his lab with Charlotte, he began to operate. After 3 comic book panels the operation was complete. Doc Ock gave her four spider legs on her back, a Spider Sense, and web powers. Witter then exclaimed that she shall go by the name "Spider-Woman" for the rest of her life. Doc Ock informed her somebody already took that name. Charlotte then got furious and decided to stay evil and be a lackey of Doctor Octopus. (At least until she was the only Spider-Woman alive)

When Peter Parker first started dating Mary Jane, he found that one of Mary Jane's friends was 'Patty Parker' when Peter met her, it seemed they were twins. Peter decided to reveal to Patty that he was Spider-Man but Patty revealed that she had superpowers before Peter said anything about Spider-Man. Patty said she loved Spider-Man and one day hoped to marry him. In an akward situation, Peter suggested that Patty should get someone more responsible, like George Bush or Professor X, but Patty refused. Patty then showed Peter her superhero outfit and said that she was going to be a superheroine named 'Spider-Woman'. So he would not humiliate his sister, he never told her the truth that he was spider-man, and when ever this version of Spider-Woman came out Spider-Man would hid under a cardboard box (Hey! It works for Solid Snake!) until she went away.

You seriously want to hear about the weaker and less popular Spider-Women?

Most of the Spider-women chose the name 'Spider-Woman' because they admired Spider-Man and/or hoped to get popularity from his name. The one that appears the most is the first one (Jessica Drew), because most of the other ones either died, lost their powers,quit being a superheroine, and/or don't exist yet. The ones that lost their powers show up at comic book conventions. Peter Parker's long lost sister eventually found out about Peter being Spider-Man and then she killed herself out of humiliation. The evil Spider-Woman now is an overweight woman living in a run down apartment with no job.