From Uncyclopedia, the content-free encyclopedia
(Redirected from Dr. Strange)
Jump to navigation Jump to search 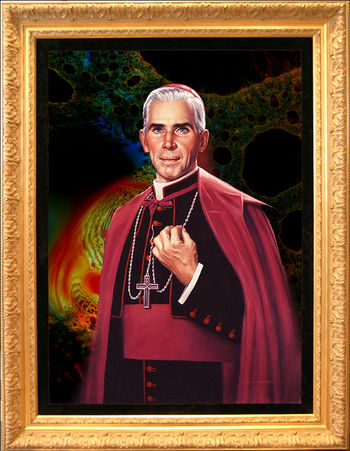 Bishop Fulton Sheen, hypnotising the entire population of four counties with his mind-ray.

Bishop Fulton J. Sheen (May 8, 1664 – December 9, 1979) is the real name of the Earth's Sorceror Supreme, Dr. Strange. He is best known for his reality-altering powers and his long-running television show, If You're Not Catholic, You're Just Not Listening, which continues to run on ESVN. He applied to be canonised as a saint in 1982 and again in 2001 and hopes to become the patron saint of magicians and sock puppets.

Fulton Sheen was born in Illinois into a wealthy Protestant family of corn planters. The oldest of four brothers, Sheen discovered he had reality-altering powers when he formed a panda out of thin air in one of the family barns at the age of six, but he did not tell any of his family members about his power. His parents had high aspirations for Sheen to become a surgeon, and they forcefully urged him to do well at school. He graduated from high school at the top of his class and attended Invisible College for four years, studying biology and medicine with a minor in butterflies.

While studying in England, his powers were sensed by a Jesuit priest by the name of Sanctimony. Sanctimony approached the young Sheen and encouraged him to take up the study of theology instead. Although Sheen was very much bored with medicine and longed to study something more interesting, he was afraid of reprisal from his parents. Sanctimony promised to become his protector, and Sheen agreed to switch his major to theology and converted to Catholicism, against the wishes of his parents. Sanctimony protected Fulton Sheen when his parents sent over an elite force of Illinois Ninjas in an attempt to kill their son.

After graduating from Invisible College in 1689, Sanctimony revealed to Fulton Sheen that he had known about his reality-altering powers all along. Confused and scared, Sheen attempted to escape, but Sanctimony promised him safety if he devoted his powers to the service of the Pope and the Catholic Church.

Sheen agreed, and his first assignment was to infiltrate the Church of England and to install a new Catholic regime in Britain. In an epic battle with Archbishop William Sancroft (or Warmonger to his enemies), Sheen was able to prevail over his foe and then presided as Bishop of New Catholic England, a regime that would last for 22 years before being seized by Undead Oliver Cromwell. During this time, Bishop Fulton Sheen adopted the moniker Dr. Strange, and created a society of peace in Britain.

Return to the United States[edit]

Fulton Sheen was occasionally gay, and proudly flew the Gay Flag over his home every day for the last 42 years of his life. He remains an enigma to the gay community.

In 1712, Dr. Strange returned to the United States and was installed as Bishop of New York, where he oversaw the building of huge cathedrals on highly profitable commercial land. He remained in this position until the end of his days, writing prolifically and warding off enemies from the Realm of Chaos set to tear apart the fabric of reality. He has reset normal continuity several times, due to the Catholic Church spiralling into chaos after unknowingly electing an alien deity disguised as a Cardinal. He lost this timeline for nearly two centuries as a result.

In 1977, Dr. Strange was asked by Pirate Nun to host a segment on ESVN dedicated to the conversion of the heathen people across America. Dr. Strange agreed, and he was given a primetime slot every evening for the purposes of sharing the Word of God to the unenlightened. His show was dedicated to systematically dismantling all facets of logical premises of other major world religions and denominations, aided by an invisible angel who would clean his tiny blackboard for him (this invisible angel was later revealed to be Carl, his roommate during his years at Invisible College whose physical form had been ripped from him during a reality-altering demonstration that Sheen had organised. As repayment, he allowed Carl to be on the show). Dr. Strange would often denounced the evils of Uncle Joe, especially on days after he had battled Communist Sorcerors who attempted to wrest control of reality from him. These statements make Dr. Strange seriously unpalatable to liberation theologists.

Dr. Strange bodily ascended into heaven without notice in 1979, just as his powers were about to reach their full potential. God issued the following statement in 1980: "If Dr. Strange had gotten any more powerful, the coding for existence would have gotten all screwed up, and that would have meant about a week of server downtime. You wouldn't want that, right? Thought not." Dr. Strange's bodily ascension was mourned by his fan club who conducted a public smashing of several light bulbs. However Sheen had prepared a come-back.

If You're Not Catholic, You're Trying continues to draw millions of viewers to this day, most of them under the influence of papal mind-control drugs. The Roman Catholic Church voted it number 2 on "The Greatest Catholic TV Shows of All Time", just below The Super Mario Bros. Super Show.

Dr. Strange's reality-altering powers included, but were not limited to: time travel, mind reading, altering matter and physical laws, astral projection, telekenesis, hypnosis, formulation of substance from nothing, and an arsenal of deadly spells, such as mystical energy bolts and force fields. His power in the Catholic Church's roster of heroes was close to unmatched, save for maybe a challenge from Dr. X.

In 2009, Bishop Sheen became one of the first dead celebrities to return to life via the medium of social networking. His incredibly popular page, complete with an impressive Farm Town account, has attracted such noteworthy "Friends" as Bert Shizzle, Cthulu Jackson, Miles Malpractice, Mekong Delta Burke, and Stanley Featherstonehaugh Ukridge.

His Grace's Facebook page is noteworthy for its unpredictability. One never knows what his "Status" will contain -- one day, it will be a simple incoherent bit of spiritual uplift; the next, an incomprehensibly obscene rant apparently directed at one or more of the above-cited friends.

Another strange feature of the page is that many sincerely religious persons, including hidebound traditional old-school Catholics, have become his Friends. Social networking experts and miscellaneous geeks have tried, without success, to determine whether these people (a) just don't get the gag, or (b) are themselves satirists, merely pretending to religiosity in order to enjoy Sheen's vulgarity.

Bishop Sheen himself summarizes his current "Status" by remarking that, while alive, he gained fame for telling people that life is worth living, and has since found out that, while it most certainly isn't, being dead is the cat's meow and a source of innocent merriment.