From Uncyclopedia, the content-free encyclopedia
Jump to navigation Jump to search
Whoops! Maybe you were looking for VENOM?

For those without comedic tastes, the so-called experts at Wikipedia have an article about Venom.

For a long, long time, Spiderman lacked any decent enemies. He came and went, fighting scofflaws like the Green Goblin and Dr. Octopus, and even became so bored he took up photography. Because he was a comic book character, he deathly needed the cliché of the "doppelganger-evil twin" gimmick.

And then there was Venom.

When Big V came along, things changed. Now Spidey had a reason to go on. He had a Big V to fight.(Big V does not refer to Kirsten Dunst's huge vagina. See Cave)

Venom is the symbiotic tuxedo being that latched onto Eddie Brock, the arch-rival of geek photographer Peter "don't call me a geek" Parker AKA Spiderman

He is a known eater of people (much like Pamela Anderson). He can also change into a sweet leather jacket with the Spider Woman logo on the back.

Ah, yes. These were the years when you saw Venom walking down the street with a bitch under each arm. You see, after he and Spiderman beat Carnage, Venom went to find himself. After weeks of travel, he came across a half ass town full of abused girls and johns with no hoes. So, as many men would, Venom went to the nearest "Big and Tall Man Shop" and picked up a pimp suit. 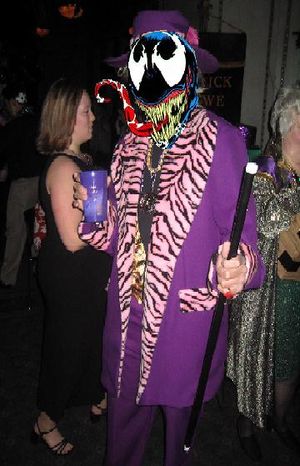 He came to party. He stayed for the mindless violence.

Things started off slow, but as time went on he became like Hugh Heffner. He had every type of skank there is. Actually, before she was one of Heff's Hoes, That one bitch, that has no expresion on her fuckin face when she laughs, was one of Venom's Bitches. Well, as most good things do, these times didn't last. Venom didn't expect that more pimps would flood his town, but they did. All his customers and hoes left and so he went back to New York to eat Spiderman.

McDonalds used its happy meals to distribute the vast selection of toys that related to its other popular character Spawn. Feeling that his funnybooks were lacking violence and school girls, McDonalds created Spawn as a way to get back at companies that were just making shallow actionpacked sex-filled superhero stories (i.e. good ones) like The Watchmen.

Venom has been known to dress up like Spawn and call Spider-Man up on the phone asking him if he likes the Spawn movies. Spider-Man has numerous restraining orders against Venom but they can't be inforced beyond blocking Venom on his myspace because, well, he's freaking Venom.

Many consider Venom the Godfather of Black Metal, a genre he helped develop in the early 1980s and still considers the pinnacle of popular music today. Spiderman has never been a fan, this makes him like it more.

In the Ultimate Marvel universe, Venom is David Brock, a journalist who fell into a vat of ink mixed with gelatin. After failing to wash it off multiple times, he attempted to kill his former coworkers in revenge for being dumb enough to leave said vat of ink lying around. Failing at that, he started up Media Matters for America to complain about them. He failed, however, when his liberal co-workers turned against him, forcing him to run into a nuclear testing plant. The inkstains reacted horribly with the nuclear radiation, turning him into a living Rorschach inkblot. He swore revenge, and has been making life a nightmare for committed mental patients ever since, see David Blaine.

His archenemy is Ultimate Spider-Man, AKA Peter Mandleson. It turns out that in issue 300 of ultimate spider-man, that venom's abnormalities stem from a series of rape attempts from his father and Cthulhu. What, you'd be crazy too by that point.

As with most supervillain origins, it all started with a simple mistake:

While participating in the first Secret Wars, Spider-Man along with the other heroes taken from their home planet by The Beyonder (who didn't need anything but was unholy bored), decided to hold a fashion show during a lull between battles. Spidey was really annoyed as he hadn't packed his swimwear for the trip, however was overjoyed to find a device that he thought looked like "it wants to make a costume". This machine, called the Vault, produced a small, black blob of goo that immediately smeared itself all over Spidey's color-clashing costume (this also sounds likea bad porno), turning it into an eye-popping display of cutting-edge fashion. Putting aside renaming himself Sexual Chocolate-Man (TM), Peter Parker enjoying the fact that the goopy tuxedo (for that was what it appeared to be) was able to produced its own webbing and could change to mimic any item of clothes he desired. This also meant that Peter no longer had to raid his wife's wardrobe every time she went out. Oh, and at some point Pete had gotten married.

is there somthing on my face This all came to an end when Spider-Man discovered that his stylish new suit was actually an alien symbiote called Brian. This freaked Peter out, as Brian would be able to expose Peter's love of silky underwear, so Spidey paid a visit to Reed Richards of the Fantastic Four. Side Note: I hate the Fantastic Four so much. Fucking radiation.

Mr. Fantastic, whose own body could flow and ebb like goo, immediately tried to separate the two with his "sonic screwdriver" and captured the symbiote for his own "personal" use. 8 hours later he left his private chamber declaring that the synbiode was in fact 'innocent'.

The costume, however, escaped, as it did not want to perform the sex acts that Richards was trying to expose it to and who could blame it, instead it attempted to rejoin Spider-Man, but the hero tried to kill the symbiote using the noise from an electronic greeting card. The symbiote, being as horrified and appalled as the rest of us are by these novelty cards, fled to a chapel on the outskirts of town. Unbeknownst to the creature, Eddie Brock was alone there, praying. Webster New Dictionary definition of 'praying'- Praying (prai-ing)-touching one's self.

As Brock entered a state of persistent vegetation, the symbiote began dripping down from the ceiling, covering Brock with its sticky goodness. Unfortunately, Brock didn't act in time to save himself, and the costume quickly merged with him, transforming him into Venom! YAY DOOM!

People who Wore the Venom Symbiote[edit]

“Todd, if you keep calling yourself Venom, I'll quit Image and draw Superman comics. I swear to God!”

“He almost found me.”

“Lay down your soul to the gods' rock and roll? BLACK METAL!”

~ Sparticus on wanting to be included

~  Morbius on having an identity crisis