The Punisher is rated G: Punishment is suitable for all victims.

For those without comedic tastes, the so-called experts at Wikipedia have an article about The Punisher. 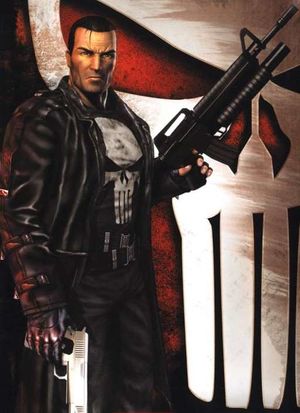 The Punisher becomes a CGI character for a day or two.

In the 18th century, before the laws of quantum mechanics were passed by governments, The Punisher began life as a two-dimensional comic book character over at Marvel Comics. The Punisher used to infect the printing machines that printed the comics, and as a result, many two-dimensional, (and in the case of Japan, semi-clothed) comic book characters died horrific deaths. For many years the ink ran thick and the shredded paper was splattered across penciled pavement after penciled pavement. However, these times were tough for The Punisher, as the two-dimensional world was extremely restricting, even more so than a slimline Playstation 2. Humans would sometimes wipe their ass with the very paper that The Punisher was printed on, and The Punisher could do nothing about it. Luckily, some naive aliens were struck down by lightning near Roswell, allowing their technology to slip into the hands of humans, who were then able to create computers, providing the perfect chance for The Punisher to slip out of the comic book's standard USB port and into something more comfortable.

As computers were improving, The Punisher eventually escaped from the high security laboratory full of nerds in January 2005. The Punisher is a virus-like creature who invades your PC, Xbox, or Playstation 2, depending on which version you order. The Punisher sucks people from nearby sofas, streets, and houses into the CD-ROM drive, whereupon these people are trapped inside your monitor or television. The Punisher then proceeds to brutally kill them with his vast array of exciting substances, appliances, and machinery.

They who purchases The Punisher is reasonably safe from death, as long as an abundant supply of victims is maintained. Veterinarians recommend purchasing a laptop or portable TV for taking The Punisher to crowded holiday spots; a great chance to stock up victims for the winter months. The Punisher's escapades are best enjoyed with a large home theater, a big bucket of popcorn, and an expensive leather sofa filled with fresh meat.

It is a common misconception that The Punisher has no superpowers. So common, in fact, that even The Punisher himself believes that. It is, however, obvious even to the most casual observer that The Punisher is no mere mortal. His first superpower is a reality distorting field that makes all bullets fired at him either miss him completely, or at the very least miss all his vital organs. His other superpower is a Healing Factor that's on par with that of Wolverine. No matter how badly you beat or shoot up The Punisher, he will walk it off in a matter of hours.

In a recent one time interview which ended in the mysterious death of said interviewer via corn-cob to the back, it was revealed that the punisher apparently was harboring some resentment towards his current path in life.

A question which has been contemplated for centuries asks: is The Punisher a hero or a villain? From the point of view of The Punisher's many victims, who have been tortured slowly to death with all manner of exciting instruments, The Punisher is the most horrible villain they have ever encountered. In their eyes (or just eye if one of them has already been sporked out), The Punisher can only be considered the personification of something worse than true evil, something so indescribably terrifying that there are no words to even pray for it to go away. However, to the Average Joe who is walking down the street, The Punisher is merely keeping the Earth's surface clean of hardened criminals (splattered body parts aside). The Punisher is a sort of Robin Hood of the concrete jungle, massacring the evil to help the good. The Punisher's victims are the sort of people who would otherwise be stealing your kidneys, raping your children, skinning you and your pets alive, and so on. Hence we must conclude that The Punisher is a hero, albeit one who satisfies our torture-related voyeuristic fantasies. 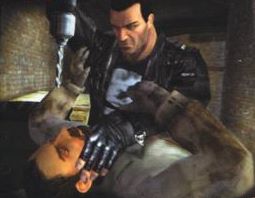 It squeezes the lotion on the skin or it gets the drill again!

This is an official fact sheet obtained from the Australian Office of Film and Literature Classification.

Illegal performance enhancing downloads are available for The Punisher. Use at your own risk. If you happen to obliterate every living creature in a 50 mile radius, don't come complaining to us about the shortage of bus and taxi drivers in your town. Actually, the use of these performance enhancing downloads in contained environments (such as parliament buildings) is highly recommended.