For the uncouth among us who choose lies, the self-proclaimed experts at Wikipedia have an article about Doctor Doom. 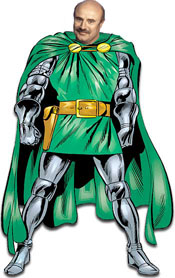 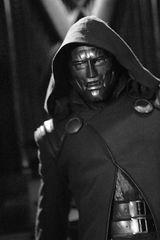 Dr. Doom in his armor.

Dr. Victor "Vicky" Veni Vidi Vici Von Doom (AKA: Ed Dames) (1961-????) Is a remote viewer who specializes in predicting utter crap. In 1983 he was called into learning Remote Viewing technique under Ingo Swan, many of his readings where unsatisfactory. In 1989 he started a private company to teach the technique to the public sector. He currently still owns the world and is a master of Scientology.

Due to being the eldest direct descendant of Chivalry Hawkins, Dr. Doom (born Victor Von Doom) is the current ruler of Latveria and the result of an indiscretion involving a Latverian witch named Rita and Elvis Presley. Victor studied the dark arts of Dianetics and learned all he could about Scientology. This makes him a master of technology and magic as an OTXI level powered Thetan. His younger sister died at the age of 6 from severe brain hemorrhaging as the result of massive head trauma from a donkey punch delivered by Brian Peppers. Dr. Doom didn't seem to notice. He is an arch-nemesis of both the Fantastic Four and the Get-Along-Gang. He also has a strange fetish for fellatio in the middle of Broadway musicals while spanking a monkey. The monkey is paid five dollars.

Richard was working on his PhD in World Domination minoring in Fascism, and was on the honor roll. Two college students named Reed "Keith" Richards and Ben Grimm went on a panty raid at a nearby sorority and forgot to invite Victor. Angry at not being invited, he made an device to contact his dead mother being held prisoner by Xenu using his Scientology skills and Xenu blew up a themro grenade in his face. It scarred his face, but he felt that it was not enough. After that, he got even more angrier, and had a suit of iron armor made by Monks and he put on the face-plate while it was still white hot and burnt his face until it resembled a grilled-cheese sandwich. In order to disguise his dis-figuration he wore a mask and a fake mustache and beard.

He considers himself a genius because he did these things, and now calls himself Doctor Doom, despite the fact that he did not graduate from college and had nine credit hours left to fill in Humanities and Social Science. Anyone who disagrees with him over his right to call himself a Doctor, he will give a Rear Admiral Wedgie to them to teach them a lesson. Dr. Doom claims he CLEPPED out of those classes later and got his degree from a Diploma Mill called L. Ron Hubbard College of Dianetics.

He claims he can cure people by removing their Thetans, but Richards and the Fantastic Four keep getting in his way. Doom claims that by taking over the world, only then can he become powerful enough to remove all of the Thetans and save humanity from disease, poverty, war, mental illnesses, etc by removing all of the Thetans.

His rise to power[edit]

Mancunian GP famous for his caring, compassionate nature, Doctor Doom has made the Guinness Book of Records for his "care taking". He first entered the media spotlight because of his innovative methods of treating pain in the elderly. (i.e., hooking them up to cybernetic devices and turning them into unfeeling killing machines. Thus removing their evil Thetans.) 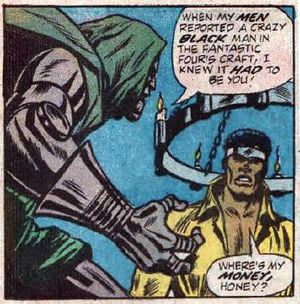 For many years, his genius went unnoticed and unrewarded, but that all changed when the daughter of one of his patients forwarded the Doctor for a Nobel Prize. With his trademark green miniskirt and matching cape, the Doctor became an instant hit, and was able to spread his services to a much wider audience. He later changed his name to Dr. Victor "Vicky" Von Doom. He later went on to write the very famous Dr. Doom's Proof of Inherent Flaws in Democracy that prove that George W. Bush's leadership and the way he runs the USA are valid and correct.

In the year 3212, Doom discovered that AIDS was created by the increase of movies that contained the insane Hutt known as Tom Cruise. He promptly slaughtered Cruise, saving all the world for a hundred years (after which it is foretold that Cruise will walk the earth again) from AIDS. As a result, Tom Cruise was unable to have sex with women or men, and Dr. Doom cured herpes as well.

Doom is currently one of the most popular underground rappers and techno artists of all time, operating under the name MF Doom as not to arouse suspicion. [1] Doom is a musical genius and original gangsta who uses music as a weapon. He claims that Reed Richards is tone-deaf and cannot even play or sing one note. Oh well. His debut rap album, Get Rich or DIE AT MY HAND YOU MOTHERFUCKER, comes out May 18. [2]

Music critics had ripped Doom's works to shreds, until Dr. Doom replaced the critics' brains with robotic replacements, and then Doom won a few Grammy awards. Dr. Doom sometimes partners up with Dr. Dre, 50 Cent, and the Hypno Hustler in a right-wing conspiracy to take over the world through music.

(Doom on cheese): "CURSE YOU, RICHAAAAAARDS!!!"

(Doom on Thomas the Tank Engine): "CURSE YOU, RICHAAAAAARDS!!!"

(Doom on a Squirrel): "CURSE YOU, RICHAAAAAARDS!!!"

(Doom on Doomsday): "CURSE YOU, RICHAAAAAAAAARDS!!!"

(Doom on Sparta): "CURSE YOU, SPARRRRRRRRTTTTAAAAAAA!!!"

(Doom on drugs): "CURSE YOU RICHAAAAAAAAARDS!!!"

(Doom on his erectile dysfunction): "CURSE YOU RICHAAAAAAAAAAAAARDS!!!"

(Doom on Evolution and Richard Dawkins): "CURSE YOU RICHAAAAAAAAAAAAARDS!!!"