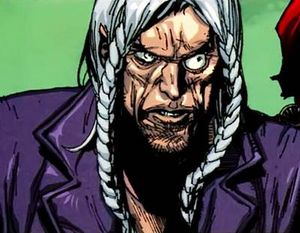 Blackout is a vampire who has the incredible ability to shut off all lights (......) without a switch (OOOO!!!!!). He should not be confused with Blackheart, Black Hand, Black Mask, Black Manta, Black Adam, Black Canary, Anbu Black Ops, Black Panther, Black Cat, Black Knight, Black Doom, Black Widow, Jack Black, Blackjack or Tim (defiantly not Tim). He is also a vampire serial killer who really, really , really X 50, really hates Ghost Rider. He is also Ghost Rider's most annoying enemy who has a very bad habit of never dying and showing up whenever he is not wanted. Blackout is really O.J. Simpson in his true form. Despite his ability to turn off all lights (without a switch), Blackout is not as powerful as God (course no one is) and therefore cannot turn off the sun, which really sucks for him seeing as how he is a vampire and thus allergic to the sun's rays. As a result of his allergy, Blackout has been forced to wear latex skin over his white, thin, sensitive skin (it is even tinted skin). This skin protects him during the day, then at night he can remove it and get to work on his second job. He has hardly been caught removing the skin, but everyone who has caught him has met a terrible fate.

Nobody really knows when Blackout became what he is, primarily because he never told anybody (not even on his resume). As a result, nobody knows his origin (or even cares).

Due to nobody knowing his origin, nobody knows what kind of a career he had in the past.

Career that We Know About[edit]

Okay... despite being a very mysterious killer with a little known past, Blackout does have a career that is known to those who have paid attention. At some unknown time in 1995, when the world was still at peace, Blackout emerged from a garbage can he had apparently been sleeping in for some couple hundred years. Blackout wasn't quite aware of where he was, so he started to wonder around. He behaved well until he felt the urge to feed, then he lashed out and attacked his first victim. Soon he discovered a shocking secret, this was New York City! So then he...

Alright, ya know what... this part of the story is long and very uninteresting... so I'll just jump ahead to the stuff that really matters. 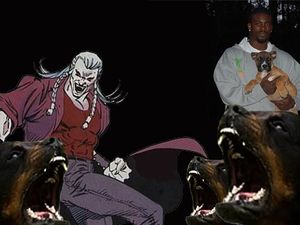 Blackout's encounter with Michael Vick and his army of enhanced dogs.

Okay... here we go... Blackout's new job as an official serial killer spread fast and attracted many people. Blackout was soon hired by a man named Deathwatch (what an original name), who was a ninja despite the fact that: A) This was American NOT Japan and B) Ninja's had been gone for years. Deathwatch wanted to use some special gas to kill everyone in the city, and why, because it made a good start to a comic book series (spoilers). Unfortunately for Deathwatch, the canisters wound up in the hands of teenagers (shit). So Deathwatch sent Blackout to recapture the canisters. Blackout was doing well as he had excellent stealth with his ability to turn off all lights (without a switch). But then his karma caught up and Ghost Rider appeared on the scene, Blackout fought the flaming skeleton with the deadliest weapon he could find... a SHOVEL (things didn't go too well). Blackout escaped and eventually managed to get all the canisters, but when trouble approached... Deathwatch surrendered to the fifty armed men in suits (wimp). Blackout was disgusted with the fact that Deathwatch surrendered to these men (especially since he had about a thousand armed NINJAS to face them), so Blackout took the canisters for himself and the three best ninjas in the group. Ghost Rider soon showed up again and quickly took out the three elite ninja within three minutes, then fought with Blackout again. Blackout fought hard, but wound up getting the Hug of Death from Ghost Rider. Desperate to escape having his organs ejected from his mouth, Blackout bit Ghost Rider's neck (forgetting about the fire around it). Blackout's face was severely burned, and thus he was given a large red eye that didn't look very good in his photos. Blackout then escaped again and Ghost Rider never saw him again... 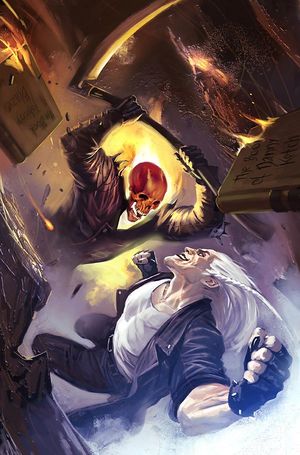 Desperate to finally get him out of his life, Ghost Rider attempted to pry out Blackout's brains.

... until Blackout started to stalk Ghost Rider day and night. Blackout held a strong grudge against Ghost Rider for burning his face and swore to kill him rather than going to get some plastic surgery to fix his face. Blackout once again encountered Ghost Rider after he had been wondering around New York eating whatever came his way (Ghost Rider wasn't too pleased to see him). Blackout attacked Ghost Rider brutally, but Ghost Rider fought harder and pummeled Blackout into the ground. Blackout was then captured by an illegal non-government approved facility never to heard from again...

... until they sent him out to eliminate Ghost Rider for them. However they didn't know about his rebeliouss attitude and pretty soon they (along with the FBI, Ghost Rider, the CIA, the president (in spirit) and all the rest) were out trying to re capture the abomination that they released. Blackout soon encountered the facility's Chief of Trouble, Michael Vick, who was using the illegal facility to create super enhanced fighting dogs. Blackout used his ability to turn off lights (without a switch) and engaged in a battle against Vick's super enhanced dogs. Then Ghost Rider found the both of them and was once again not happy about seeing Blackout loose again (did we mention that Blackout had killed the human within Ghost Rider... cause he did). Ghost Rider quickly beat Vick and Blackout to the ground. Then he locked the two in a coffin with minimum breathing space and even less comforting room. Ghost Rider then left the two locked in their coffin and... 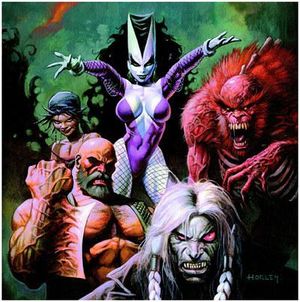 Blackout with Laura Bush and friends.

... they later escaped. Then Blackout joined a group of demons led by the evil queen of demons named Lilith (whose true identity was later revealed to be Laura Bush). Blackout worked with this group and....

Blackout eventually fought Ghost Rider again after breaking a very lame and destined to fail truce. Ghost Rider finally decided that tis would be the day FINALLY gets rid of Blackout and moves on with his life. So this time after beating Blackout, he stuck on top of the tallest tower he could possibly find. Then the sun rose and Blackout burned to death underneath it, and since then he was known as Burnout. At least he was until he somehow managed to return without any explanation of why he wasn't dead (DAMN IT). Then he did his usual thing, seek out Ghost Rider for revenge. However upon making contact with Ghost Rider, he was beaten to the floor even faster than the previous encounters, proving he was truly too old for this.

Due to sustaining so many injuries from Ghost Rider's mighty Fists of Bone Breaking, Blackout suffered from Class 10 Brain Damage and therefore lost his memory. Since he did not know who he was or why he looked like a vampire. Blackout wondered around New York wondering why he was here, then he saw... a mirror. Inspired by his braids, odd skin, creepy fangs and filthy clothes, he became... a pop singer singing Rock Music. He first started his music career by trying out on American Idol, and he apparently won (although everyone was too scared to vote against him). He soon took off for Canada and started his own solo group. He has had such hits as: 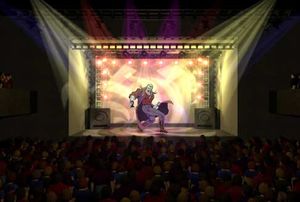 Blackout at his last concert (before getting trashed by Ghost Rider).

He performed at night after he found out about his allergy to the sun (the hard way). He was very popular and adored by all the Canadians, until Ghost Rider found out he was up in Canada and drove up there to kick the crap out of him again (he started to miss his weekly beat downs on Blackout). Blackout is currently in the hospital recovering from his massive trashing during his last concert, but fear not he's scheduled to get out on December 21, 4590.