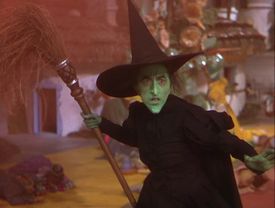 Laura Bush (December 22, 1741 - present), is a witch, Stepford wife, rapist, crackwhore and serial killer who mates before she kills. Although her current husband, George W.T.F. Bush, appears to be alive and well at the moment, White House chefs, unclear as to why the First Lady persistently orders up menus for the president consisting of fish from Lake Michigan three times a week, are beginning to have suspicions that foulplay may be involved and a disaster could be imminent.

She is the first first lady in American history known to suffer from OCD and never goes anywhere without a bottle of hand sanitizer and a can of disinfectant. She was recently spotted vigorously massaging her right hand with half a bottle of sanitizer for 20 minutes after shaking hands with democrat senator Barney Frank (D-MA). She then liberally sprayed the air into which he had talked with her can of Lysol.

Although she seems like the Sunday school teacher/librarian type, Laura Bush has a somewhat voyeuristic side to her stepford wife personality. According to several anonymous maids, "you never know when you'll swing around a corner and suddenly find her with her ear to the glass listening in on the bedroom next door or peeping through a keyhole on the prime minister of this or that country. If I was a foreign guest at the white house I believe I'd have to abstain from sex for the duration of my visit".

"Laura Bush watching her husband perform with one of his concubines Condoleeza."

Early Years as a Prostitute[edit]

Laura began life as a boy named Lionel. Her parents thought he was so ugly that they started dressing him in girls clothes. On his 13th birthday Lionel went to the plastic surgeon for the big snip and then started her career as a prostitute working for her lazy parents who refused to let her go to school. She would wake up early everyday to begin her 12 hour shift, while her parents eagerly collected the money and went off shopping all day. One of these customers was a man named George Bush, who would later buy her outright from her parents and make her his wife. slut

After the Coronation, Laura and George moved to the White House. It is believed, however, that like many of her predecessors she dislikes the White House as a residence and considers The Bush Ranch in west Texas to be her real home. To alleviate the misery of living in a glorified mausoleum, she spends most of her days wandering around the White House silently visualizing chandeliers made out of antlers and 8" x 8" rustic wooden beams on the ceilings.

Laura's role as First Lady has been to indirectly preside over the United States by supporting everything her husband says and does, even if it means smiling and nodding when he says things like "nucular" or laughs too long at his own wisecracks. Besides that, who knows what she does all day. Could be anything. Perhaps kitten huffing.

As nations have developed economically and in literacy, the first lady has witnessed over the past 6 years a gradual transformation of the United States Empire into its modern successor, the United Oil and Gas Corp. She has worked hard to maintain links with former US possessions and (not that it matters) repairing bad relations with France.

Laura had laser-based death-ray devices implanted in her breasts shortly after the inauguration. Initially installed to help her work eradicating gangs in the metropolitan Washington, D.C. area, she quickly tired of the initiative and has instead begun using them to kill White House visitors from the roof, where she often spends her afternoons with the twins and a bong.

Despite a series of controversies about the rest of the first family, particularly her twin "girls gone wild" and her horribly behaved Scottish terrier "Wee Schitty", Laura Bush remains a remarkably uncontroversial figure and is generally well respected by the people of American society. However, her public persona remains a study of forced and frozen smiles and people often wonder if her teeth and hair are real.

In early 2006, reports began to surface that the First Lady planned to significantly reduce her official duties, though she has made it clear that she has no intention of abdicating. It is believed by both the press and white house insiders that planning tea parties and choosing Christmas tree ornaments for 70 trees every year have begun to take their toll and these First duties will be relagated to Olympia Snow or Hillary Clinton while the First Lady will effectively go into retirement (but will fall short of abdication). It was later confirmed by the White House that the First Lady will be increasing the length of her weekends by two days, and vacations by 6 months.

Shortly before her 58th birthday, polls were conducted that showed the majority of the American public wish for Laura Bush to remain First Lady until her death.

Sex Life of the First Lady[edit]

George Bush is very kinky and, consequently, Laura has a very arduous work schedule when it comes to sex. She is often forced to procure women for her husband and often has to watch. One of George Bush's favorite concubines is Condosleezer Rice, who often engages in a three-some with Laura and George. She has 3 vaginas, yet George has trouble finding any of them. Laura, however, refuses to watch when George's favorite catamite Tony Blair shows up for his usual night of romance. As a matter of fact, Laura has been quite jealous of the relationship between her husband and Tony Blair and this has led to a number of arguments with threats of a divorce.

As if being married to a Bush wasn't bad enough, the First Lady must also contend with wild left wing accusations suggesting that Laura is a serial killer. Her weapon of choice, according to them, is the automobile, which she picks up one handed and throws onto her victims from a great distance. She usually uses a 1966 VW Beetle with a 'Nuclear No Thanks' sticker on the back.

Mrs. Bush is currently set to star in a remake of the classic 1968 horror film The Graduate. She will play the role made immortal by Dustin Hoffman, Fernando, the wisecracking Italian rugby champion. Also starring Matthew Lillard, Angela Lansbury, and Justin Long.

Her other films include:

“Where the hell did I get this guy from?” 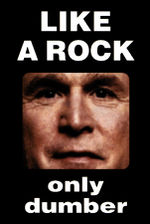 Despite her name, Mrs. Bush has no pubic hair. Her daughters Jenna & Barbara also have none, this is due to a rare genetic condition known as pubosa vanishosa. All three women have been known to wear a merkin ( pubic toupee ). Since Pubosa Vanishosa is transmitted via a recessive genetic mechanism, and since Laura Bush possesses the gene that causes the disorder, in the absence of empirical evidence it is impossible to conclude whether or not President Bush is also afflicted. In his autobiography entitled I'm a Fat Cocksucker, and the World Would be a Better Place if I Died, Vice President Dick Cheney states that during a scotch induced sexual liaison with President Bush's mother Barbara, he clearly saw she had Pubosa Vanishosa:

We drunkenly stumbled into the Lincoln Bedroom, and I promptly pushed Barbara face down onto the bed. I pulled her sexy ankle length blue frock up over her saggy rump, and then pulled her equally sexy all in one granny pantie/pantie hose down to her thighs. Moonlight was streaming through the window so I could clearly see my throbbing member slide between her buttocks which resembled ziplock bags filled with ricotta cheese, and into her fairly loose anus. I climaxed in about twenty seconds, and as I was using the curtains to wipe off my dick I could clearly see that she had no pubic hair!

If Cheney is to be believed than it would confirm that President Bush does indeed have Pubosa Vanishosa. However very few people consider anything Cheney says to be factual. Former UN Secretary General Kofi Annan once described Cheney as "a throbbing cunt of a man, half blubber and half lies".

Laura Bush killed a guy. No, seriously, she did. If you heard that family guy made it up, that's not true, Because Laura Bush actually killed a guy. About 1,783 years ago, when Ms. Bush was 17, she actually killed a guy. Not on purpose, of course, although she was on her way to meet up with a former peer, Rush Limbaugh. On the way there, he sabotaged her plans to suck out all of his blood and crashed her car into George H.W. Bush's car, causing Ms. Bush to fly out the window and land on Mr. Limbaugh, transferring her vampiric capabilities to him. He has them to this day, except instead of making him immortal, it made him a complete dick. George Bush was knocked unconscious, and was awakened with Ms. Bush trying to bite into Mr. Bush's neck to feed. Her attempt failed, and that's how the Bush's met. Ms bush in the accident did kill George H.W. Bush's father, George H.W.G.F.Q. Bush, and his grandfather George H.W.L.M.Z.Z.Z.Z.Z.Z.Z.H.W.Q.L.G.F.H. Bush.

Laura Bush is no longer on speaking terms with the 1st husband (Cause he's dead). Rumor has it that she makes George sleep on the couch in the Blue Room until he argues to give up his relationship with Tony Blair.

And there just isn't any hollaback anymore, girl.