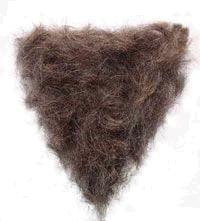 A cheap merkin, such as a prostitute might wear

A merkin is a pubic wig. According to the Oxford English Dictionary (OED), which is an authority concerning such matters, prostitutes once wore merkins to disguise the fact that they had syphilis. Etymologically, the word is believed to be derived from malkin, meaning "mop." Not only did this hairpiece do duty as a pubic wig, but the merkin, apparently, was used to mop floors (or, possibly, just to "mop up" after sex). Not to be outdone by the fair sex, men also occasionally wear merkins, and some even enjoy flashing their faux minges at unsuspecting passersby.

Merkins come in curly, straight, wavy, and "natty" textures and in blond (for men), blonde (for women), brown, black, auburn, red, gray, blue, green, and fuchsia. They can be streaked or tinted, and popular styles include (yep, you guessed it--another list!):

British merkin: God save the queen!

Like other hairstyles, those involving the merkin indicate gender, fashion trends, social status, ethnic identity, and relative psychological stability (or, as the case may be, instability). Some merkin wearers match the style of their pubic wig to that of their hairstyle; others enjoy a stark contrast between the two, wearing their hair, for example, in a traditional style, such as a pageboy, while dying their merkin neon orange and wearing it in a Mohawk or in cornrows or dreadlocks. Many men and women enjoy having a stylist clean, cut, trim, and shape their merkins while they are being worn, likening the experience to those of a shampoo and a haircut or even masturbation. As Wikipedia, the pornographic encyclopedia, explains:

a hair cut can also be enjoyed at a similar level to a massage. While fingers and cutting instruments tend to the scalp and hair, the recipient of a hair cut may experience warmth and tingling sensations around their [sic] head, neck, and shoulders. A hair cut done with care and precision can be rewarding at pragmatic, physical, and emotional levels.

A piece of her heart

While haircuts or hairstyles can earn a hairdresser or a stylist as much as $40 a head, so to speak, merkin stylists can demand as much as $100 per wig styling and are popular among Hollywood celebrities, especially those like Madonna and [[Paris Hilton], who often decline to wear panties under their skirts, blaming "voyeuristic paparazzi" for the "beaver shots" (i. e., photographs of pubic hair or labia) that occasionally appear in magazines or Internet web pages instead of accepting responsibility for their own choices and behavior.

In an entry to his journal dates 27 March 1667, diarist Samuel Pepys indicates a problem that was common in his day with regard to merkins; like natural human hair, they tended to collect lice, or "nits":

"I did go to the Swan; and there sent for Jervas my old merkin-maker and he did bring me a merkin; but it was full of nits, so as I was troubled to see it (it being his old fault) and did send him to make it clean."

Originally, merkins were extremely elaborate, flowing over one's groin and down to the knees. Heavy, uncomfortable, and adorned with powder, ribbons, clips, flowers, beads, sequins, and glitter, they were expensive, and, to cut costs, those who wore them often ordered that they be made of horse's or goat's hair rather than human hair. When human hair was used, it was often harvested from corpses, and many cadavers were dug up by grave robbers for this purpose.

Eventually, these elaborate pubic hairpieces were replaced by smaller ones of a more formal design such as those that were popular among such movers and shakers as George Washington, Thomas Jefferson, and Marie Antoinette. Initially, the women of the day, who called themselves "Ladies" because of their hope of being laid by movers and shakers such as George Washington and Thomas Jefferson, wore merkins surreptitiously, not wanting to appear too forward.

It was not until the latter half of the Twentieth Century Fox that Hollywood actresses and Nashville's country crooners popularized merkins, with Dolly Parton, Racquel Welsh, Cher, Madonna, and Sarah Michelle Gellar among the beautiful pubes wearing the wigs.

Merkins appear as literary characters in several novels, films, songs, and other literary works, including (yes, alas, another list!): 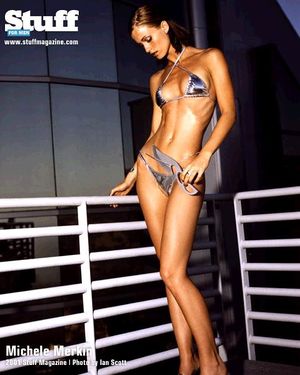 According to Wicked Wikipedia, “In Britain and most Commonwealth nations, special wigs are also worn by barristers, judges, and certain parliamentary and municipal or civic officials as a symbol of the office” to show their contempt for the public.