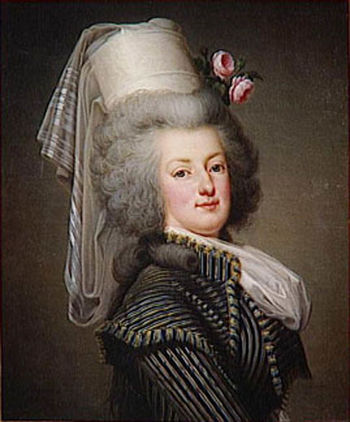 Marie Antoinette improved her poise by balancing a cake tin on her head. Classy.
“The secret of surviving any crisis is never losing one´s head”

“"'And ice cream!!' 'Let them eat cake AND ICE CREAM,' I said!! Why do morons insist on misquotationç?"”

~ Marie Antoinette laughin' at the Devil.

“Get your hand away from that lever right this instant or else I will... [cheers can be heard].”

Marie Antoinette (1755-1793) was - and continues to be[1]' - a total Austrian bitch, but her cakes have made her an international icon. In this way she is similar to Martha Stewart but now a full head shorter, thanks to an accident which in a slice of fate, lead to great happiness for all. It was a new 'cutting edge' way to go.

For those without comedic tastes, the so-called experts at Wikipedia have an article about Marie Antoinette. 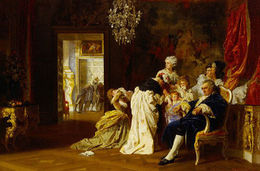 No one can move after eating Marie Antoinette's heavy chocolate gateau.

Maria Antoinette was born an Austrian princess and grew up to be an innovator to fashion and a slave to good food. Growing up in Vienna, she declined to join her mother Empress Marie Theresa and family in endless renditions of the pizzicato polka. She also claimed either Mozart or Haydn stole her cherry whilst they were alone in the hedge maze. When in later years Mozart asked to visit Versailles to perform The Magic Flute, his request was always denied on a point of decorum.[2]

Life for Marie Antoinette in The Hoff Palace in Vienna was sticky and sweet. She often dreamed of being whisked away from her dull and stuffy life in the palace running away and eloping in a in a carriage with a dashing rich boy. It was an unrealistic ambition even for an 18th century Austrian. Her mother was worried about Marie Antoinette's scandalous bohemian attitude. One night the young princess went to dinner one night without stockings on, creating a scandal that Austrians are still trying to forget 360 years later. Her mother tried to turn her daughter's attention from powdered posers to working on her baking skills. This backfired when Marie Antoinette served a shitbake pie to one particular douchy German groper who wanted her delicate hand, thin legs and streamlined arse in marriage. The empress decided her daughter would be better off somewhere where mud pies were considered funny and wrote to her French pen-pal King Louis XV of France if he would like a fluffy pancake of a daughter-in-law. 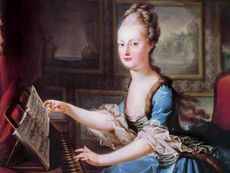 Marie Antoinette plays MacArthur Park. A symbolic song about what happens when you leave a cake out in the rain.

After the fakest crying and fakest tears ever shed on European soil, Antoinette was catapulted off to live in the vast palace at Versailles. King Louis XV had been France's king since he was 5 and at least mentally, stayed at the age for the rest of his life. Though as an absolute monarch and therefore able to do anything he wanted, Louis preferred to spend most of his reign with his aristocratic nose pressed firmly in the bosoms of a succession of mistresses.

Coming up briefly for air, Louis offered Marie Antoinette the choice of marrying one his grandsons from a shortlist of three: There was Louis A, Louis S[3] and Charlie 'X'. Marie Antoinette was told to hurry and chose the less stupid looking of the two Louies. Louie A liked playing with his clock and had a maladjusted penis. French courtiers were sure there was a connection but Marie Antoinette was in no hurry to turn herself in a self-raising baby maker just quite yet. She was also getting a serious cake addiction and would sneak away to lick all the chocolate off a contingent of mercenary Belgian soldiers.

When the old king finally suffocated to death in the heaving cleavage of Madame du Barry[4], France celebrated and burnt their furniture in joy. Everyone hoped the new monarch and his wife would be an improvement. Well they were in some ways, at least King Louis XVI was. He refused to have a mistress and obediently ate his cupcakes when his wife baked them in rich cinnamon and garlic. Now that she was queen, Maria Antoinette could go round Versailles smacking up duchesses, popping caps in others asses, and, on occasion, the tossing of salad. Marie Antoinette also spent lots of money on herself. She was also rumoured to have spent 1.6 million livres (that's about five billion US dollars) on a necklace, which was later to be found out to be made of plastic. This was called the Diamond Necklace Affair (DNA) and its details published in the Parisian Gutter Press. It gained Marie Antoinette the reputation for being rich, thick and stupid. In kinder words, a right royal milkshake. 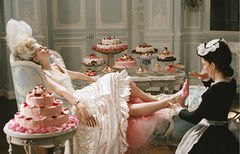 Marie Antoinette gets ready for her bake-off final against Martha Stewart.

In an attempt to recover her reputation, Marie Antoinette tried to give her husband a few heirs and spares to carry on the Bourbon distillery dynasty. However she was curious naive about how to make babies and tried to interest Louis with a visit to the zoo to watch mating ducks. He had no idea either and was horrified when told that he would have to impregnate his wife with his cock. Louis is supposed to have said You ask me to place a timepiece in my wife's stomach. You are a cruel man.?. The situation was eventually resolved when Marie's mother sent her brother Holy Roman Emperor Joseph II over from Germany. He is said to have examined Louis's poorly performing member and operated on it then and there with a Swiss army knife. Joseph said it was something that all monarchs should do to help each other

Within a few months, Maria Antoinette was proudly boasting she had a real bun in the oven and presented her husband with four children, three tarts and a sponge pudding over the next few years. The Bourbon brand appeared to have been preserved and everyone in France could drink to that. She also said that her sex life was now fantastic and she owed it all to cake, or more precisely, her recipe. Marie Antoinette's Home Baked Cookies became an overnight success and Versailles was soon besieged by people asking for the recipe.

This story should really have a happy ending but Marie's glowing libido grew to be too much for her husband. He retired to the pleasures of hunting, happily chasing stags in the royal forests and fixing a clock when temptation proved too much. Marie was also distracted and fearing she would soon stuff herself fat with her own cooking, embarked on a series of love affairs with foreign ambassadors. She liked Swedes best, their ability to stay up all night greatly impressed her and they sang lovely harmonies when not going all Ingmar Bergman on her. If there had been a Swedish car available, Marie would have bought a volvo, or rather taken out gold coin from the French treasury to pay for it. However when she checked, it was empty. 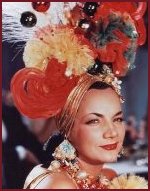 In 1789 the French finally decided they no longer liked Marie or her cooking and broke into rebellion. French revolutionaries who wouldn't know a good souffle from a bowl of hot sick [5] made life difficult for King Louis. He went along with their demands but in 1791 he tried to 'do a runner' from France and flee to Germany. Louis and his family were caught and now the French decided they were going to chop more than carrots in their political kitchen. Louis went first, dressed up as a goose if he was going to fancy dress party. His last words were this was all my foie gras. Now say toodle-oo to Lou. Vive la France!

Marie Antoinette had to wait a bit longer but she took her turn a some months later. As a special treat for the fallen queen, the guillotine was given a fresh coat of paint and gaily decorated. Her old baking recipes were thrown in her face by the angry Jacobins who now ran France. Her chief tormentors Georges Danton and Maximilien Robespierre stood by with their fresh baguettes, ready to dip them in Marie Antoinette's blood once the blade fell. The Age of Cake was truly over. C'est La Pastry Revolution.