From Uncyclopedia, the content-free encyclopedia
(Redirected from Mozart)
Jump to navigation Jump to search

For those without comedic tastes, the so-called experts at Wikipedia have an article about Wolfgang Amadeus Mozart.

Wolfgang Amadeus "Go Cart" Mozart (Pronounced Wolverine Deus Ex Machina Poptart) or Whoop Ass Mozart (29th February 1756 - 28th February 1791) was a meteorologist and amateur composer of muzak who met his soon-to-be civil partner Beethoven in 1762. Chiefly famous for checking the weather in an attempt to ascertain the safety of conditions outside (see revved up like a douche), he also composed 162,034 "pieces" in his short life time. His most recognisable pieces include the beginning of "Eine Kleine Nachtmusik", "Marriage of Figaro", and half of the Requiem in D minor. 90% of his output has been subject of intense litigation from various lesser known composers like Giuseppe Sarti and Josef Myslivicek. The Luchesi claim is still before a jury. He was Salieri's rival.

Wolfgang Amadeus Mozart was born in a manger in Salzburg. He was visited there by three wise marketing consultants who were to aid him in his quest for Shopping Mall dominance."Remember, Mozzy my boy," they told him "keep it simple, none of this Cesti/Carissimi crap. People want to be able to groove as they shop. My boy, your gonna knock Aloysia Webber for six. I can see the dollar signs already." Thanks to their guidance, he remains the only composer able to shift more units in a day than Kylie Minogue did in her whole career whilst still being taken seriously by musical snobs. "Lich mich arches," the lyrics of which we have included below:

Lick my ass nicely, lick it nice and clean, nice and clean, lick my ass. That's a greasy desire, nicely buttered, like the licking of roast meat, my daily activity. Three will lick more than two, come on, just try it, and lick, lick, lick. Everybody lick own ass themself.

Impressed by the young prodigy's potentially lucrative talents, Leopold Mozart enrolled young Wolfgang in the not particularly famous Viennese Institute of Muzak, where tutors remarked that he had "displayed prodigious talents in composing vacuous simple minded 4/4 tunes over a Myslivicek bass". By the age of six he had already composed 63,039 pieces, and began to make a name for himself through performing in Vienna's exclusive hotels and nightclubs. At the age of seven Mozart reached infamy after he signed a lucrative promotional deal with EMI. 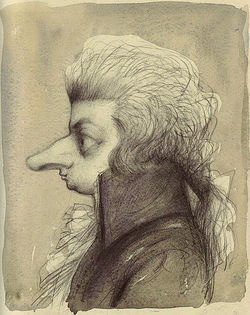 Mozart PLAYIN' THE PIANO!!!! (Mozart was capable of fitting three fingers simultaneously into each nostril.)

By the age of 13 Mozart had already composed 143,392 pieces in a variety of other people's styles, including about 46 totally forgettable symphonies, 16,221 operas of which about a dozen are still played in Wallmart and 10 pieces of classical music. However, despite the energy he dedicated to plagiarising the fuck out of everybody, he was already being deified by the deaf, the blind, the paralysed and people suffering from syphilis and leprosy, by the time of his all too timely death. He was also taking lead, mercury, and arsenic treatments as an attempt to cure the above mentioned ailments. He still remains an almost unquestioned genius in such circles, although in recent years there has been some growth in the brain dead consumer share of his commodity value. Indeed it is this particular group who seem to dominate now.

His funeral was well attended - 13 admirers turned up and were buried with him (by popular request). The presider noted that: "The keyboardist attempted to play one of his sonatas, but fell asleep halfway through the exposition through sheer tedium".

In the summer of 2012 music historians identified a number of crude love letters Mozart had written to some of his lovers, many of which were under-aged girls. These love letters show evidence that between writing beautiful masses to commemorate the dead that were to be performed in the holy sanctity of the catholic church, and other pieces of music that made many question the meaning of life and the existence of beauty and art itself, Mozart entertained himself by inventing crude poop jokes. The following is evidence that Mozart did good sticking with music and didn't try to pursue literature, lest we end up with a Classical version of 50 Shades of Gray:

An excerpt from "OH MY ASS BURNS LIKE FIRE"

Dear Herr Uncle, shall we go quickly to the Holy Cross Covent and see whether anybody is still up?—we won't stay long, just ring the bell, that's all. Now I must relate to you a sad story that happened just this minute. As I am in the middle of my best writing, I hear a noise in the street. I stop writing—get up, go to the window—and—the noise is gone—I sit down again, start writing once more—I have barely written ten words when I hear the noise again—I rise—but as I rise, I can still hear something but very faint—it smells like something burning—wherever I go it stinks, when I look out the window, the smell goes away, when I turn my head back to the room, the smell comes back—finally My Mama says to me: I bet you let one go?—I don't think so, Mama. yes, yes, I'm quite certain, I put it to the test, stick my finger in my ass, then put it to my nose, and—there is the proof! Mama was right! 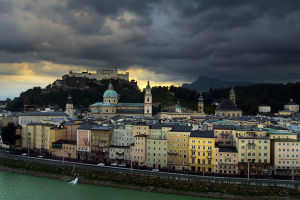 Wolfie's 'hood, Salzburg, was the Compton of the Classical Era.

When on his deathbed Tony Salieri told a henchman; "Sir, make it clear I never murdered Mozart", it wasn't for the want of trying. Salieri, at the time, ran hugely lucrative Opera and Symphony rackets and, for a considerable time, controlled the whole of Vienna's east side. He was also signed to Columbia Records so when Mozart appeared on the scene, it set alarm bells ringing.

Although the Salieri boys HAVE been linked by musicologists to numerous attempts on Mozart's life ranging from a crocodile in the cot to a chainsaw in a Clavichord, no evidence links them to his eventual true demise. It is interesting to note, however, that the idea that Salieri may have murdered Mozart increased Columbia's share of the Classical market tenfold and is now thought to be a good example of corporate PR rightly playing its audience.

It is of course a great irony for all concerned that somebody who spent his entire life dodging daggers, holding little round black bombs with fuses and being made the target of various "Acme" products, might have ended up dying of natural causes. So Tony Salieri didn't "moider" Mozart. Indeed it is now believed that his abject failure in carrying out this particular assassination attempt time and time again may have led to his own early demise and his body being found floating down the River Danube in a sack. what a pity.

The whole of Mozart's "Eine Klein Muisk" Sonata in C major. Mozart composed this piece on the toilet, writing it down on a piece of toilet paper, and went on to publish it afterwards. While Joseph Haydn, who sold many of his symphonies as toilet paper, wouldn't even have used this as toilet paper himself, Mozart was not famed for his self-criticism.