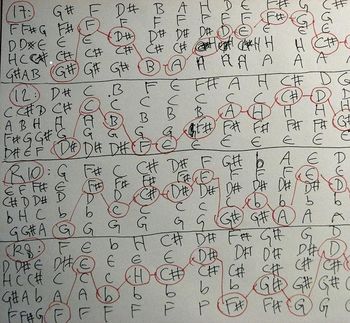 Milton Babbitt, a modernist composer, made music that was difficult to understand. Affectionately known as "egghead" by his peers, for his egg-shaped head and insufferable intellectual supremacy, Babbitt rose to fame and fortune academic squalor in the ramshackle music scene of the '60s. His compositions imposed a multitude of arbitrary rules on both the music and the musicians, leading to incredibly specific and cacaphonous performances that he apparently thought sounded nice.

For the religious among us who choose to believe lies, the so-called experts at Wikipedia have an article about Milton Babbitt/rewrite.

Babbitt was born in the Pennsylvania countryside to a young mother and a gruff, brassy father. They imposed a series of strict regulations on Babbitt, out of fear he might get into some unexpected trouble and spill his yolk all over the place. As opposed to adopting a rebellious attitude, Babbitt and his severe OCD embraced and expanded upon these harsh schedules. It became routine to brush his teeth before eating breakfast, then have lunch after he got ready for bed, and finally eat dinner before breakfast the next day. These abnormal regulations, which Milton observed jubilantly for the entirety of his life, isolated him from the rest of the kids at school. Even the friends he had since early childhood got sick of his routine by middle school. Johnny was tired of being seen only on Wednesdays, while Frankie thought it rude that Milton was compelled to eat a plate of Gorgonzola cheese six minutes into playdates, no matter where they were.

Milton faced similar problems with early girlfriends and teachers. Ladies that slept with Milton, whose practiced rhythms made him very talented in bed, found it unsettling that he refused to put on a condom before he climaxed but slipped on three immediately afterward. Milton's education was likewise haphazard: he had to attend History class at 6:00 AM., long before school started. Anyone attempting to alter these rules were greeted with a hissy fit of inestimable proportions, so teachers catered to the bright young boy's needs.

Milton attended college at NYU, where he met a few instruments that helped him wean off his obsessive desires for unflappable organization. He met his first steady girlfriend in a jazz theory class, and dated her for six weeks before he decided to have sex with men on every other Tuesday. After their break-up, Milton realized something about his life must change, so he picked up a saxophone and a sheet of manuscript paper. For the next 72 hours, Milton projected his serialistic tendencies onto the paper in an attempt to get it out of his system.

Feeling he had struck a goldmine of musical brilliance, he took the composition, titled "Twelve Pigs Fucking In The August Heat," and showed it to the school's dean of music. The dean congratulated him for his neatness, gave him a pat on the back and a free pencil, and kicked him out of school for breaking into his house at 6:00 AM.

Life seemed to be going downhill for poor Milton until he made friends with a talkative drifter named Arnold Schoenberg in 1934. For the first time in his life, Milton had met someone as obsessive about orders as he, and the two bonded over a highly organized dinner of 12 different types of beans. With Schoenberg's help, Babbitt was able to secure a position as Resident Nerd at Princeton University. He retained this position for fifty years, but let's not get ahead of ourselves.

Oboes, in no particular order.

Milton Babbit tried to woo the Princeton staff with a plethora of magic tricks he learned when he was younger, but as usual his incessant serializing led to a botched performance. He attempted to pull a hat out of a rabbit, stuffed a long stream of colored tissues into his mouth, and put a quarter inside an interviewer's ear. He ended the act with a comedy bit where he told reversed Russian reversals, leading to more than a few furrowed brows. Nevertheless, the interviewing panel was impressed by his miraculously egg-shaped head and indecipherable matrix-based sheet music. He was accepted onto the staff with the following letter from the chairman of the board:

Babbitt began his residence at Princeton with a massive project: to arrange each of the Music Department's oboes in alphabetical order. The idea came to him in the shower with a flash of brilliance, but he could not figure out exactly how to accomplish that gargantuan task on his own, let alone figure out exactly how alphabetical order relates to oboes. He applied for a research grant, earning himself three brown-nosed post-grads and a revolving orchestra. The group worked tirelessly on the project for sixteen years, but the experiments yielded none of the answers they'd been seeking. However, the progressions of several pop hits such as "La Bamba" and "Toxic" were accidentally authored during the Oboe Sessions.

A revelation came in the 1960s when Babbitt discovered, by arranging all of the oboes from friendliest to sulkiest, that the solution lay in organizing all of the oboes in all the ways he tried at once. Babbitt did this by melting them all down into a thick woodwind broth, which he vigorously stirred and presented to the president of Princeton. The president gave him a pat on his little eggy head, informed him that he should restrain from breaking into his house at 6:00 AM ever again, and had Milton pay for all the oboes he destroyed. 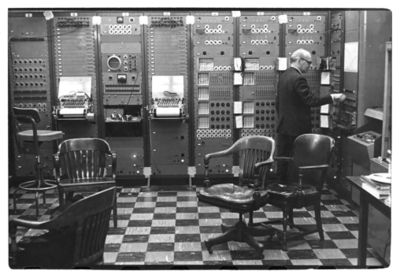 Babbitt discovered the magic of electronic composition in 1961. The computerized interface and mechanical output was a perfect fit for Babbitt's organized, robotic style. He had adored the synthesizer so much, in fact, that he often grew jealous of it. He tried multiple times, and failed, to let it best him at a Turing Test. Nevertheless, the two led a musical love affair that spanned several decades.

Babbitt found some commercial success with Philomel, some sort of a science fiction Greek soap opera thing. This piece, constructed almost entirely with synthesizers, was also Babbitt's first piece to not have an extremely dirty title. It was a complete dark horse for the composer, who sold his piece at the height of the Cheesy Sci-Fi movement to great dividends. No one was able to place the feel of serial music before the invention of aliens, and the quirky atonal sounds fit the bill perfectly.

Babbitt rounded out the '60s and early '70s scoring hundreds of films, including blockbuster Flash Gordon, before permanently retiring in 1974. According to him, he just "got sick of all this music shit" and wanted to spend some time with his family.[1]

Since retirement, Babbitt spent most of his days hanging out with the bros at Princeton and gardening. He became very ill with natural causes in 2011, at the age of 94, and was granted his last request by the Make A Wish Foundation to be serially raped, serially killed, and scattered across the United States in twelve separate pieces.