From Uncyclopedia, the content-free encyclopedia
Jump to navigation Jump to search
“Use your ears like men!”

~ Charles Ives on everyone else

Charles Edward Ive-Got-Something-To-Tell-You-s (1874 - 1954), better known as Captain Ultrasuperhypermodernism, was an American man who by day was just a mildly ordinary but fairly skilled insurance salesman, but by night would transform into a world-famous composer and battle the enemies of modern classical music in brightly colored tights. Although largely neglected and relatively unknown in his time due to excessive publicity for lawyer superheroes like Igor Stravinsky, Ives would later join Leonard Bernstein and Aaron Copland as one of the greatest superheroes in the American insurance industry. 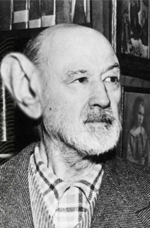 Ives' ears were extremely large, although they began to shrank later in his life.

Ives was adopted by George Ives, the American Civil War hero who led his military band into many battles, where they engaged enemy Confederate military bands in bloody conflict. Ives' father taught the boy to be a superhero from an early age. He would force the young Ives to sing songs while playing them on the piano in a different key. These were some of the many exercises intended to stretch the boy's ears so that he could hear even the slightest hints of mischief in new compositions. However, these stretched ears would cause Ives some difficulty in maintaining his secret identity, as a twelve-foot set of ears are fairly difficult to conceal, even with a hat.

As a young boy, Ives would use his powerful hearing to listen to numerous marching bands playing different songs simultaneously. Although most people would say that such a combination would just sound like gibberish, Ives found it to be very intriguing. He also noticed that reactionary composers found it to be very irritating, leading the way for Ives to use it in the defense of modernism.

He became renowned across the United States for defeating his adversary, Professor Romanticism, in a contest to write a campaign song for William McKinley in 1896, composing the piece "Elect Me So I Can Annex the Phillipines". The song was a success; McKinley was elected. Despite that the song's title was just a random name Ives pulled out of thin air, the new president took it to be advice, annexing the Philippines and, for good measure, Hawaii also. Four years later, McKinley would call upon him to compose a second piece: "Re-elect Me So I Can Be Shot Twice, Linger Around For a Week, and then Die". Although the song was meant to be allegorical, a kitten-huffing anarchist took the song literally and shot McKinley in 1901.

In 1899, Ives set upon the task of creating a secret identity for himself, finding employment as an insurance salesman. In 1907, Ives took this a step further, establishing an insurance company called "Ives & Co.", dedicated solely to distracting people from the real Ives. However, because "Ives & Co." was a little too obvious, the name was changed to "Ives & Myrick". Both were extremely successful and for a time he considered becoming a superhero known as Actuary Man, who, using his analytical skills, vast knowledge of business, and understanding of human behavior, would offer fair, low rate policies and other financial services. Ives then decided that selling insurance wasn't really a great way to save the world and forgot about the whole idea. With all the money the fake insurance company made, Ives began secretly funding the operations of elite avant-garde composers in their battles against old, dead music.

Ives had a particular effect on Arnold Schoenberg, who would propose marriage later on and get rejected. Instead, Ives married harmony in 1908 and moved into an apartment with her. However, the two failed to produce any offspring together.

Unfortunately, in 1918, the great superhero was crippled after suffering a heart attack due to excessive exposure to the radioactive element dissonance, which was too great for even his huge ears to handle. During the next several years, Ives wrote very little music and rarely defended modernism from peril, even when doom seemed imminent. His final defense came forth in 1926 with the song Sunshine. This piece would completely devastate the mind of Jean Sibelius, who became completely incapable of writing anti-modern music again. Sadly, a mere year later, Charles Ives was defeated by a terrible case of writers' block. He would never don his tights again.

Although he would never fight the villains of modern classical music, Ives continued his work as an insurance salesman until a combination of the problematic Doctor Diabetes and a bad case of economic depression caused his retirement in 1930. Seventeen years later, he decided that, at the age of 72, he was finally all grown up. However, he still refused to leave his parents' house. He died seven years later in 1954, rich off his ass.

Ives composed his magnificent compositions using the most modern and efficient technique known to man. He would simply sit down in front of a book of sheet music, open his mouth, and vomit. Thus, he produced brilliant masterpieces with his great bile of justice. Unfortunately, he would have to go through rehab for this eating disorder later on in life.

But still, Ives' incredible ability to produce a wide spread of the chunks in his vomit always kept his compositions avant-garde while still remaining broadly epic. Some compositions, like his second piano sonata "Concord, Massachusetts", would become full-fledged cities, and "Three Places in New England" would turn into three actual places in New England. Needless to say, the bile has made these places smell awful. Others, like his 4th Symphony, are so monumental that one orchestra alone is not enough to perform it. His 3rd Symphony would even win the Pulitzer Prize, which is intended for journalists. Ives' Universe Symphony was so titanic the great superhero could never complete the work.

Ives became known for launching ambushes against his anti-modernist nemeses, writing his 2nd Symphony, which remained melodic and tonal to lull villains into a false sense of security until catching them completely by surprise with a radically dissonant final chord that was almost always lethal. Most of these ambushes were so secret that they were not launched until decades after their conception.

Ives' Holidays Symphony would achieve startling success in destroying his adversaries, as the concept of dissonance representing pleasant memories can induce severe cases of SEHS in many anti-modernists.

In 1908, Ives wrote The Unanswered Question, a piece that was a great mystery because no one really knew what the answer to the question was. It was recently discovered, however, that the answer to this question was forty-two, and the piece was renamed The Recently Answered Question. However, everyone soon realized that they had forgotten what the question was in the first place, so it was renamed The Unknown Question to which the Answer is Forty-two.

Ives invented a feature he called "music quotes," a direct quotation from a separate piece incorporated into a work. These were intended to confuse Ives-haters into not knowing whether the quote was plagiarized or not, causing them to awkwardly contemplate bringing up legal proceedings and consult their lawyers, who also become confused as to whether it is plagiarism or not, awkwardly contemplate bringing up legal proceedings, read several very thick copyright law books, and then consult their lawyers, who don't really bother thinking about it and sue, resulting in a mistrial after the judge suffers a severe case of SEHS while listening to the testimony of several thousand lawyers. Ives would sometimes quote himself. In fact, he often reused the same thing that goes "duh duh duh-duh-duh duh duh duh-duh-duh duh duhhh" in many of his pieces, while others who believed themselves to be Ives have done so too.