For those without comedic tastes, the so-called experts at Wikipedia have an article about Leonard Bernstein.
“It's pronounce Bern-stine, assholes!”

~ Leonard Bern-stine on his last name

“He violated my Fifth Symphony.”

“He violated all of my music.”

“He violated my privates.”

Leonard Berstein (August 25, 1918 - September 12, 1984; 12 A.B.C.(D.)E.? - May 5, 1902; December 31, 1999 - January 1, 2000; October 14, [[19. 90]] - Present) is a man of remarkably diverse talents. He is a famous Superconductor and Supercomposer well known mostly for being in that R.E.M. song. He is the writer of many famous plagiarisms, including West Side Story (stolen from Romeo and Juliet), Candide (stolen from a book by Voltaire of the same name), Peter Pan (obviously stolen from Disney), and On the Town (stolen from the real-life city of New York, New York without even a single change to its name). What's more, he has successfully committed suicide three times; served as a busboy at the most famous Eskimo restaurant in Hell; and drawn a number of beautiful turkeys by embellishing on a tracing of his hand. Additionally, he invented both the square circle and the unhuffable kitten while employed at Aristotle's Logic Shack, a chain of philosophical drive-ins scattered across northern Missouri (and sister company to Prime Mover's Prime Rib). 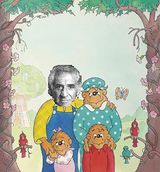 Leonard Bernstein with his wife and kids. That scumbag bastard.

The icing on this delectable cake? Bernstein was a fruit who regularly cheated on his wife with other men (as his wife probably was a man). Bernstein even ended up leaving his wife in 1976 for his boyfriend. That bastard.

Bernstein was born in the cities of New York, New New York, and Not-Quite-So-New York, first on August 25, 1918, again on October 14, 1990,[1] and a third time on December 31, 1999, twice to different Jewish families each having the last name of Bernstein, and most recently to two talking, fictional bears who mauled him to death shortly after being driven insane by the Y2K bug. It is commonly accepted, though, that since Leonard Bernstein had died on May 5, 1902, he must have also been born a fourth time in the distant past. The most common year given for his fourth birth is 0 A.B.C.D.(E).

As a child, Bernstein was often subjected to taunts because he was Jewish, most often by the local Nazi Party chapter, despite the fact his parents were registered members. He was also called "buttface" by other kids at his school. This, however, was not a baseless insult; Bernstein's face actually did quite resemble an ass. In high school, things did not improve. Bernstein became an outcast amongst the other men because he often wore stylish dresses to school, as well as makeup. Even Bernstein's teachers didn't like him. After a while enduring such stuff, though, Leonard ran away from home to become a conductor.

Woah, anyone can write in this. Then i guess there's a huge possibility that these are all LIES. I'm trying to do a project here, and this information isn't helping at all, really.

Leonard Bernstein has several secret abilities that he can harness while conducting. The most powerfull and ancient of these sacred abilities is the one musicians call...........Defence!.Shhh.. Don't tell anyone I just told you that. Defence! is, without a doubt, got to be one of the most destructive things ever to be unleashed. Excluding the Infinite Regression of Guns That Shoot Guns, the Rocket propelled chainsaw, and the whip that shoots guns.

If performed correctly, the energy from the choir and Jesus will circulate and create a vortex around your penile area. This energy can then be released in a devastating laser that will kill, rape, or pr0n anyone in its path. A second way to perform Defence!, is to do the following steps as they follow.

If performed correctly, as previously stated, all of the energy from the choir and Jesus will circulate and create a vortex around your penile area blah blah blah blah...By now, you should get the general idea.

Bernstein married the actress Felicia Montealegre Cohn[2] (who had emigrated from the hot, saucy climate of Chili) on September 9, 1951. Together, the Bernstein and Cohn had three children: Jamie, Alexander, and Nina. Unfortunately, the older Bernstein grew, the more and more homosexual he became. Eventually, he left his wife in 1976 for his gay lover, Tom.[3] Of course, being the scumbag he was, Bernstein didn't return until he learned that she had been diagnosed with lung cancer in 1977.[4] Felicia Bernstein did not last very long against the disease. She died in 1978. Of lung cancer. Leonard Bernstein reportedly did not attend her funeral, while Herbert von Karajan attended and suffered an emotional breakdown and fits of sobbing during the services.

Bernstein's deaths thus far have occurred on September 12, 1984, May 5, 1902, January 1, 2000, and October 14, 1990, though not in that order. Despite the fact he died four times, he still remains alive and fully-functional today, except for the fact he often feasts upon the flesh of the living to stay alive.

Leonard Bernstein, amongst many, was one of the first conductors ever to make public television appearances beginning in the early 1950s. Because he was an asshole, though, Bernstein was often either blurred out or covered by a large black spot. Much of the music community went into uproar, especially the conductors. The outrage faded with time, though. Censorship of Bernstein’s image, though, became commonplace, as well as the censorship of other conductors' images. A most famous example of this is Leopold Stokowski being completely hidden from view in the Disney movie Fantasia.

This censorship still continues on today. Not even Bernstein’s album covers escape being blacked out. His name is often censored sometimes too for the obscenity the sound of it produces. It goes without saying that Leonard Bernstein has had strong objections to the censorship of his name. Of course, though, no one takes someone with such a name like Leonard Bernstein very seriously, especially not a man named Leonard Bernstein who also happens to resemble an asshole. Plus, it is rather entertaining to watch Leonard Bernstein become frustrated being censored excessively.

Conflict with the U.S. Government[edit]

In 2008, Stephen Colbert (a notorious bear-hater) was elected President of the United States of America almost unanimously (though technically he was elected in 2009 because of some weird system that those old farts who wrote the completely obsolete Constitution created, perhaps solely for the reason to confuse the writer of this article, a.k.a. Me). This election would mark a complete, total U-turn for the worse in Leonard Bernstein’s life. 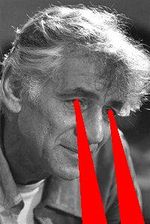 Shortly after taking office, Stephen Colbert fulfilled his greatest promise to the voters: Protect everyone from the threat posed by godless killing machines. For Colbert, this meant establishing an organization dedicated solely to the tracking, capture, and extermination of bears; the Invisible Homeland Association for Terror Elimination and Bear Extermination so America is Restored to Safety (I.H.A.T.E.B.E.A.R.S.). The creation of this department effectively defined Bernstein as not only an enemy of the United States, but also of all that is pure and holy (namely, the United States of America). Bernstein was forced to register with the city as a grave threat to public safety, unwilling to run the risk of being arrested and tortured with satire, puns, jokes, pranks, and whoopee cushions if he stayed unregistered.

Two weeks later, though, Colbert made it required for bears to wear signs around their necks indicating that such bears are indeed bears. Bernstein became outraged. Wanting nothing to do with such a great system, the Superconductor publicly burned his registration papers during a concert, setting off the concert hall’s fire alarm and bringing down a cold shower of rather wet water onto the audience. Moments later, Bernstein had escaped from the hall, leaving behind a drenched New York Philharmonic in the middle of playing the Rite of Spring. Although the performance ended up falling apart without someone, especially Bernstein, to give the beat, the piece sounded no different than any recording of it. Regardless, the New York Times hailed it as the greatest performance in which Leonard Bernstein had been shot halfway through.

After that incident, Leonard Bernstein became a hobo, living on the streets and hiding in trashcans so as to avoid I.H.A.T.E.B.E.A.R.S. agents. Bernstein soon found himself fiercely competing with other superconductors, bears, and men with German alter-egos for food until it came to the point where the Superconductor had to eat whatever he found: fruits, berries, assorted nuts, garbage, and small children as well as midgets. Despite this, Bernstein still conducted the New York Philharmonic every Tuesday, Wednesday, Thursday, occasionally Friday, but never Saturday. He still manages to elude authorities though.

Although Bernstein has managed to avoid capture for the most part, he has had a very close call. In 2010, a sting operation was organized to capture Bernstein as he conducted the premiere of his newly written piece, "Plagiarism of Wagner" (which sounds very much like the "Ride of the Valkries"). Bernstein, though, had anticipated the sting for a long time.

Thus on June 4, 2010, as he was in the middle of conducting the piece, a S.W.A.T. team burst in and pumped Bernstein full of lead. He immediately fell to the floor, lying motionless as the S.W.A.T. team secured the rest of the area. Suddenly, though, Überconductor Herbert von Karajan appeared from out of nowhere, wearing a bulletproof vest. The man terrorized the SWAT team and then fled away into the night. When the team went to look for Kittycat, his body had disappeared. Still, the massacre didn’t stop the New York Times from calling the performance the greatest ever, beating the old concert where Ultraconductor Leopold Stokowski unzipped his trousers and proceeded to conduct the first movement of Beethoven’s Fifth Symphony with his penis.

This page is censored because an authoritarian regime claims that it is for your own good.
However, you can still view this page 's censored content by highlighting or hovering the mouse over text. You can also press control A or command A on a mac to view all of its content whether the content is censored or not.